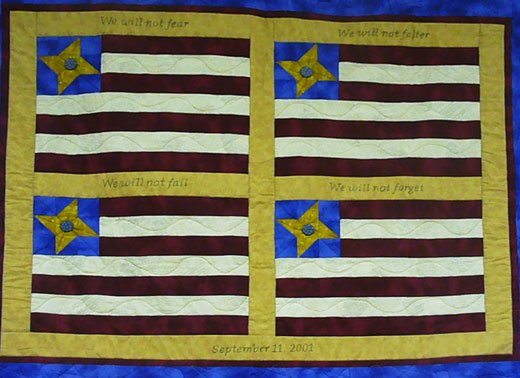 My husband wrote a poignant column for today’s paper, looking back at some of the days after Sept. 11, 2001 – from the point of view of a “newspaper guy.”

He wasn’t my husband at the time, simply a good friend. I know now that he had a good friend in New York City who he’d been trying to get in touch with that day, probably pretty urgently. Meanwhile, at the time of the attacks, I was a copy editor and news assistant; a staffer, not a manager, while Chris was our sports editor at the time. Now, I know a lot more about newspaper management, and I can’t imagine how I would lead my own department in the face of such a tragedy.

I’d encourage you to read Chris’s column here. It’s an honest and important look at a terrible day.

For my part, the things I remember most about 9/11/01 in my own life are some of its crazy little ironies. I’d watched the towers fall on TV as I was preparing to head to a day of classes at York College, where I attended school full-time each day before, normally, heading to the YDR for an evening/night shift on the copy desk. At some point, the phone rang, and Donna, our office manager, said, “We’re calling all copy editors in. Please get here as soon as you can.” I emailed a couple of professors, including the woman who taught my first class of the day: “Modern ethics.” I had, at the moment, no idea about the tough ethical choices that would face us as a news organization, or the choices I’d face as an American.

Meanwhile, the entire staff gathered at the YDR, and we just worked. What else could we do? I was not quite two years into my job, the youngest staffer by far at 18, and all I could do was take my cue from everyone else. It wasn’t until much later that I realized they were no more prepared to deal with the day than I was; much later, several other people told me they were watching yet other staffers, trying to see what the “appropriate” response would be. I guess we were all in the dark.

There are two moments I most clearly remember. When I saw the first plane hit, I said, “That has to be intentional.” Then I did something I’ll never forget; I turned my 18-month-old daughter, Sarah, around in her bouncy little seat, facing the wall instead of the TV, because I didn’t want her to see.

And then, much, much later – maybe 4 a.m. the following morning, when we finally left work – I was driving home. I often called the overnight radio DJ, a guy by the name of Josh Beck, to request songs on my commute home, trying to stay awake at a late hour. This night, there was no music. There wouldn’t be for several days, not on any station in America. But I called anyway, and I remember asking Josh, nonsensically, “What day is it?” I meant the day of the week, but his response has stuck with me for a decade. He said, “Don’t you know? It’s the day the world changed.”

I don’t know if, at the time, either Josh or I or anyone else in the world had any idea how much of a change the next 10 years would bring.

In some ways, we’ve come full circle since that time. Things are different, but in so many GOOD ways, they’re the same. Life goes on, and in so many ways, we’re happy and blessed. That’s one reason I was proud to see the quilt above on display at the York Fair. It’s always been a tough juxtaposition – the York Fair, almost every year, overlaps with the anniversary of such a day of sorrow. Seeing this quilt Friday almost brought tears to my eyes, but in a good way; I was glad to see its words: “We will not fear. We will not falter. We will not fail. We will not forget. September 11, 2001.”