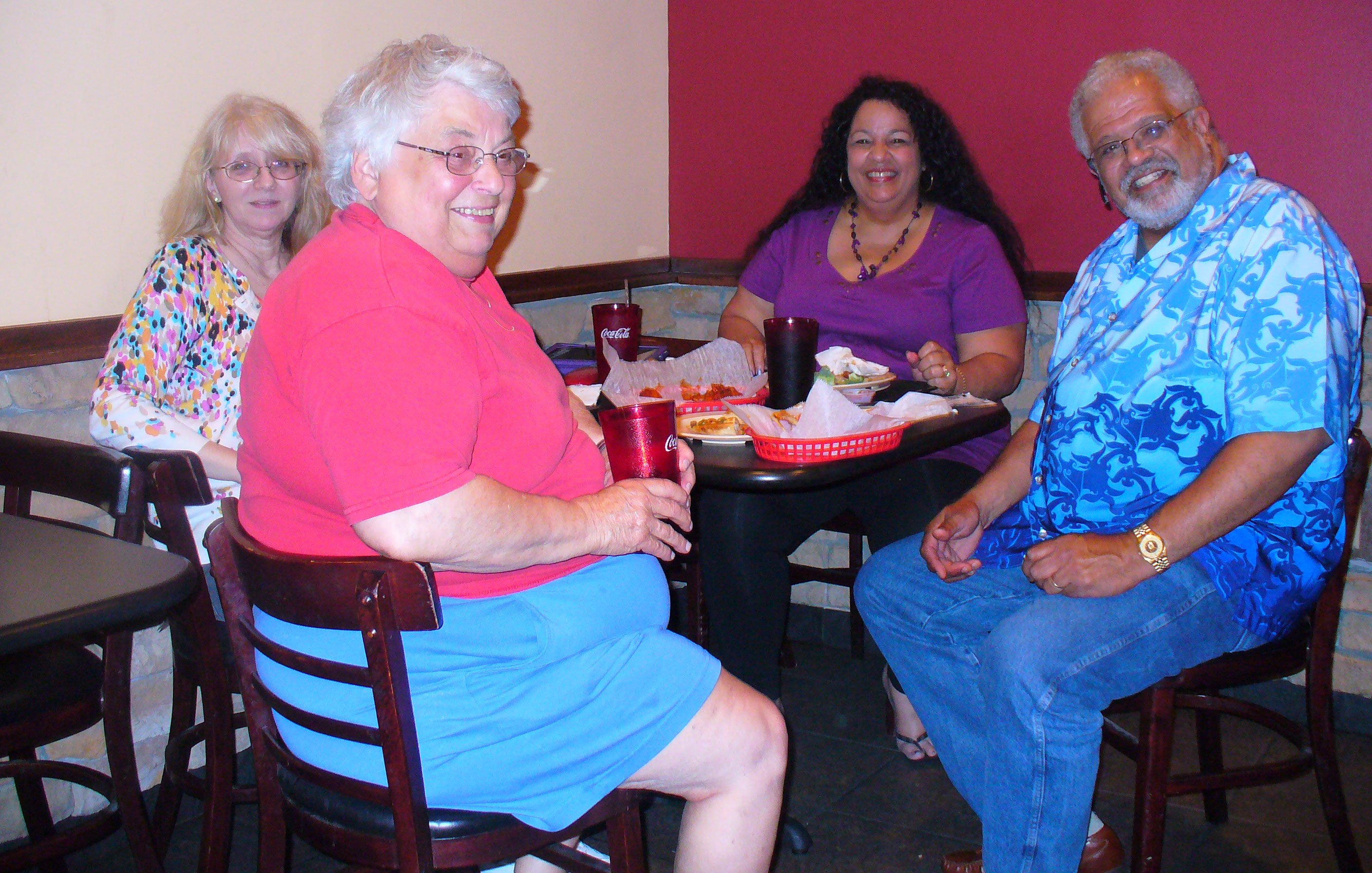 Jo Ott, pictured second from left in the red shirt, was a longtime reader of Only in York County and a great resource on Pennsylvania history.
Posted by Joan ConcilioJuly 29, 2018October 13, 2021 Dover/West York, Local memories, Northern/West Shore1 Comment

Last Thursday, the York Daily Record featured something about one of my biggest supporters, longtime reader and commenter Jo Ott of the Lewisberry area. I’m very sorry to say, though, that it was an obituary. Jo passed away July 23, and while I’ll miss her amazing insights about York County past and present, I will most miss her kind words and the friendship I was lucky enough to develop with her thanks in part to this column.

Jo was awesome. I started writing the Only in York County blog in June 2007, and she began commenting less than a month later. She continued to comment and we began emailing back and forth about the little things that make this area special. She’d tell me about tidbits she dug up at the former York County Heritage Trust, now the York County History Center. She shared information about out-of-the-way York County cemeteries. And she was an immense photographer, regularly taking pictures of both local scenic views and fun local history finds.

Jo was also a big part of another major YDR project I was involved in: The Exchange, our former message boards, where she posted for many years as AzaleaLady. That project ran from 2005 to 2015, and among the neatest parts were some meetups we organized.

Between Christmas and New Year’s at the end of 2010, we held our first get-together in the York Galleria food court, and in June 2011, we held a “100,000th post celebration,” a dinner that the YDR sponsored for some of the top posters on The Exchange, at the former DaddyO’s Pizza on East Market Street in Springettsbury Township.

The photo you see with today’s column is from that meetup. Jo is in the front in the red shirt; to the left is JoAnn Paules, and to the right are Sandra and Bob Merriman. I am still in touch with all of these folks thanks to the power of Facebook, though Sandra and Bob have since moved to Georgia.

In addition to those meetups, Jo was always inviting me to cool York County events. She participated in a regular apple butter boil each fall, and kept trying to get me to come. I thought it sounded like a great event, so I kept saying I would. I even got as far as pulling into the long drive leading to it one year. But I never made it the rest of the way.

I emailed and told Jo that I’d eaten some bad fast food earlier in the day and it made me sick, and that I was going home to rest. The truth was, I was dealing with some immense anxiety issues at the time, and it was the thought of getting out of my car into a group of strangers that was making me ill.

I think Jo always knew, if for no other reason than the number of invitations I dodged over the years, but she never called me on it. She just kept inviting, and occasionally I would show up.

One time, I brought her a bag of carrots from the grocery store after she had a bad fall and couldn’t drive for a bit. And I remember going to the Greater Dover Historical Society’s picnic with her once and taking home half a tray of deviled eggs. Those eggs were for former YDR sports editor Chris Otto, who Jo also corresponded with regularly. When Chris started writing his own blog, Papergreat, Jo proved just as devoted of a follower to him as she was to me.

On Papergreat, Jo could share her passion for history beyond York County. She was born in Juniata County and remained devoted to that area’s history her whole life; in fact, her family asked that memorial contributions be made to the Juniata County Historical Society. She’d also lived in Luzerne County during her childhood, and shared her memories of West Pittston in Luzerne on Chris’s blog.

Most recently, Jo had sent me some information in response to a question from late 2017 about a painting signed “Eyster 85.” Reader Nancy Bowings had been trying to find out more about it, since it came from a York home and she thought the artist might be local.

Jo was quick to send me as much info as she could about that painting and agreed with me on my guess about the year. She wrote, “Nancy Bowings’ photo of child and dog is reminiscent of paintings done circa 1800s and I suspect that 85 could be 1885. Eysters were very much a part of York and York County long before then, beginning in early to mid-1700s. My Gibson 1885 shows a General Jacob Eyster who was born near Hanover was a descendent of John Jacob Eyster of the Kingdom of Wurtenburg. George Eyster, one of the early settlers, lived in Manchester, which included West Manchester, in 1783 near Wolf’s Church. Elias Eyster was one of the organizers of the Spring Garden Band. There was Peter, Rebecca, Sarah, Margaret, Louisa, John, Elmyria and a Rev. Charles Eyster.”

She continued, “One of the Eysters owned 600 acres near Wolf’s Church. There was an Eyster Hotel on West Market Street, built in 1700s by Daniel Ragan, which was purchased in 1854 by Capt. John Myers and formerly known as Myers’ Hotel. Successive owners were Frederick Myers, Marshall Smith, W.T. Williams and Elias Eyster. Jacob Bear used a portion of the building for a banking establishment. Eysters were farmers, served on school boards and county and community boards and services, much like many present-day Yorkers.”

All that based on a last name? That was quintessential Jo. She loved history and loved sharing the information she had with those who needed it. When she emailed me about that topic in December, she’d been going to the gym five to six days a week, and had been to Pittsburgh to visit her granddaughter and great-granddaughter, who was 3 1/2 years old at the time. We also shared some probably outsized excitement about the fact that she was able to go to The Container Store while she was there, a chain York County sadly lacks.

We chatted a bit about my family, including my son, Ash, about whom Jo wrote, “I can’t believe how old he is now — all grown up practically.” Jo first met Ash when he was maybe 10, and Ash just graduated from high school earlier this year.

It wasn’t a deep conversation, but it was important to me. I mean, here’s this person I met through some online comments more than a decade ago who knows and cares about my family. She’s among many people who taught me the value of community – both geographic and otherwise. And I miss her.