Do you remember the Red Lion bean strike? 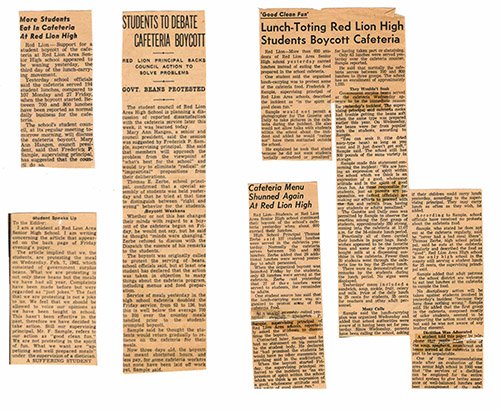 School’s out! But I do have a fun school-related post to share today, which I’ve held onto for some time. It was shared with me by Trudy Wise on behalf of Treva Grim Grove.

Treva had noted that in October 2012, the Red Lion High School Class of 1962 celebrated its 50th high school reunion with a weekend of events and memory-sharing.

Treva noted, “One of the highlights of our senior year was in February of 1962. Our class initiated a ‘strike’ against the cafeteria. We were being served government surplus navy beans numerous days in a row,” she said, noting that you could soak and soak those beans “and they just wouldn’t get soft.”

Treva continued, “At the time of this strike the school had 800 pounds of this variety of beans in storage. The boycott lasted for three days. This news made headlines as far away as California, and as close as the local newspapers reporting on a daily basis.” (And you can see an example of that in the image at the top of today’s post!)

Then, Treva added, “This ‘bean strike’ was featured at our 50th class reunion and was once again ‘as in the spirit of good clean fun’ as our then supervising principal, Mr. Frederick P. Sample, stated 50 years ago.”

She added, “Each attendee at (the) Sept. 8, 2012, event at Kerry’s Green, the former Red Lion Country Club, received a laminated place mat with numerous newspaper articles featured. This was a nice memento of our 50th celebration which brought back many memories and many laughs. The table centerpieces were fresh flowers with a bean can serving as the vase.”

Finally, Treva concluded, “There are several members of this class residing in York County that have first hand knowledge of how this ‘strike’ came to be. Maybe some of them have more to share on this event.”

I would certainly love to hear more too – like how we came to have hundreds of pounds of surplus beans! I love a good clearance at the grocery store as much as anyone, but…