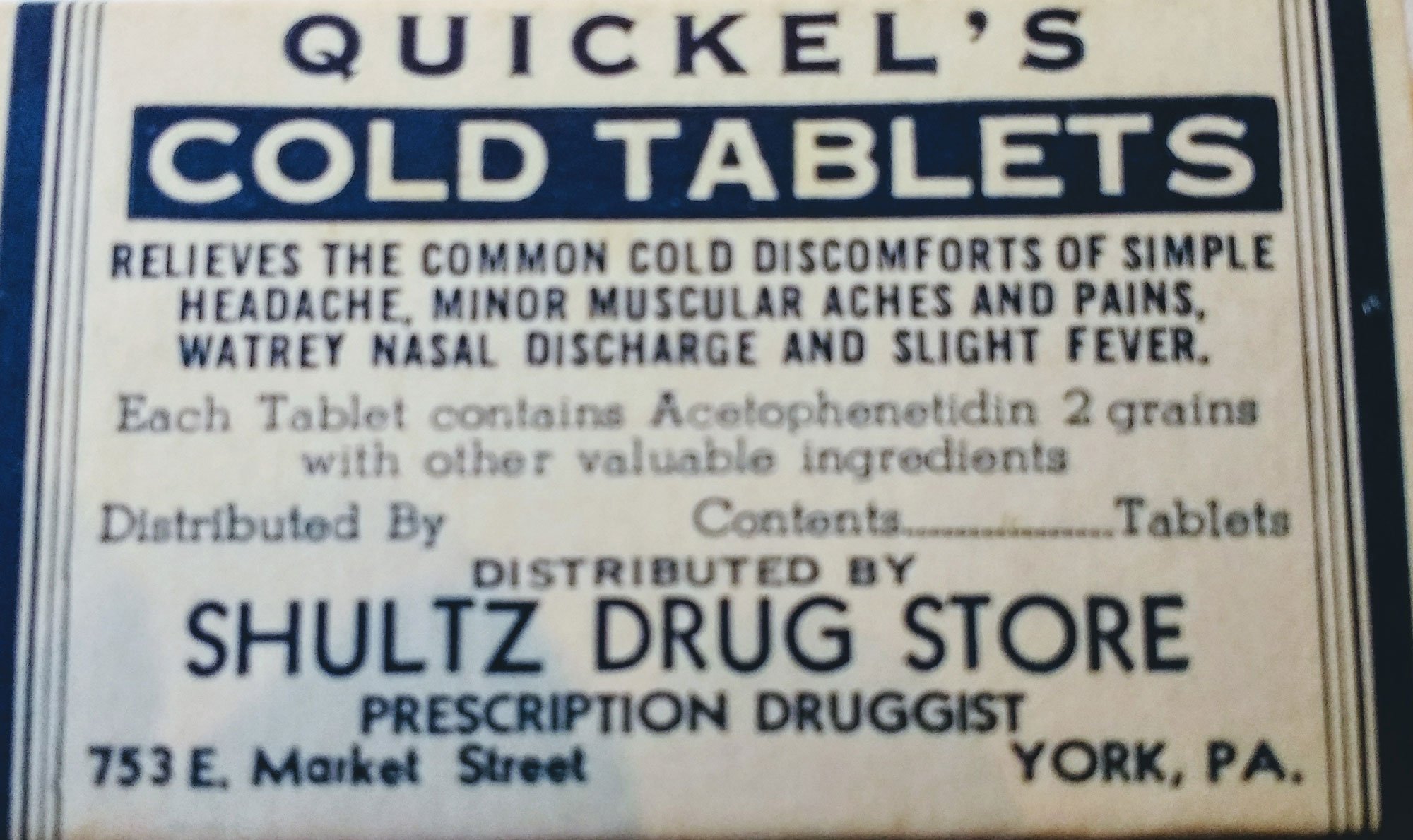 Reader Paul Quickel purchased this package of cold tablets and wants to know if the Quickel they're named for is a potential ancestor.
Posted by Joan ConcilioJune 18, 2019 Ask Joan, Local memories, York City/Suburban1 Comment

I’m continuing to dig through my various emails and letters, and while I have some recent topics I’ve promised to follow up on soon – like Carl’s Newsstand; thanks to the many of you who’ve written about it! – I wanted to kick off the official start of summer with some shorter notes and follow-ups.

I had an email earlier this month from Paul Quickel, who shared the image you see with today’s column along with a note.

He began, “I recently purchased a small box that was marked with Quickel’s Cold Tablets,” adding that he read a column from around this time in 2018 in which reader Dennis Smith shared a number of memories of former drug stores in the York area.

Dennis had written that “there was a drugstore and soda fountain (Quickel’s) in the middle of the 700 block of East Market Street and later Shultz’s Drug Store at Market and Sherman streets.”

Paul said, “I was wondering if you had any information about the Quickel’s Drug Store as I am trying to find out if this was owned by one of my ancestors. And whether this drug box was from the Quickel’s store.”

What it’s seeming like to me is that this may have been two names for the same drugstore at different times; the address given on this tin for Shultz Drug Store is 753 E. Market St., which is just about half a block before you reach Sherman Street heading east. I am also wondering if the original formulation of these tablets came from Quickel era and continued to be sold once the store changed hands.

The earliest reference I found to a Quickel as a pharmacist in York was in a listing of 1916 graduates of Philadelphia College of Pharmacy, which included David L. Quickel, Ph.G., 1308 N. George St., York, PA, which would have been in North York. (Strangely, we’ll get to that area of North George again in the next letter, too! Also, Ph.G. was a pharmacy graduate degree, usually a two-year program, used in the early 1900s.)

But, at any rate, those are just guesses or pieces of information I’ve gathered, and I’m not sure what is or isn’t accurate or helpful. So, I am hoping readers can fill in more info!

I last wrote about Gingerich’s Menswear Store late in 2018, when I shared memories from longtime reader Tom Keasey.

Regarding Gingerich’s, which was at 1003 N. George St. in North York for many years, I also heard from Chuck Peterman of Red Lion.

Chuck wrote, “I went to school with Mr. Gingerich’s son Mike. When Mr. Gingerich passed away (early 1990s), Mike, who lived in California, called me to sell the inventory of his father’s clothing store. I took a lot of people to his store and sold everything at 90 percent off. Plus all the tuxes I sold at $25. He still had tuxes from the ’50s and ’60s, wild colors and ruffled shirts. Mr. Gingerich lived on West Jackson Street.”

Chuck, it’s really neat that you were able to help out with that, and this also pins down a date for us; originally, reader Dick Sweitzer wanted to know when the store closed, so this helps with that significantly.

In April 2018, I shared a letter and photos from Joan (Posey) Edsell, talking about a public recreation area at Dick’s Dam near New Oxford, Adams County. Joan’s mother, who lived and worked in York, would regularly take vacations with girlfriends at Dick’s Dam.

Some time after that, I got a card from Virginia Lease of York. She wrote, “Joan (Posey) Edsell’s memories and pictures of her beautiful mother rang a bell for me. In the ’30s and ’40s, a Sheaffer family lived on Pennsylvania Avenue across the street from us. They had a daugther Ethel and a married daughter who had a child, Joan Posey, a few years older than my little sister.”

Virginia continued, “As Joan outgrew her beautiful dresses, they would give them to Mother for our Mary. I always wished someone older would hand down dresses for me. Could this be the same Joan Posey?”

Virginia, I don’t know, but let’s see: If Joan (Posey) Edsell is reading this, and that story rings a bell, Joan, would you please get in touch with me? I’d love to put you in contact with Virginia!

4. Even more memories of Jacks

I know, we just had a whole column on Jacks! This former department store in downtown York was so popular. But I found one more letter that I’d received last year, and I want to share that today.

The only bad part is, the letter writer only signed their initials – J.M.K. I feel like this is someone who’s written to me before, so I should know who it is, but I am not turning up a name. So, J.M.K., I apologize.

Our letter-writer said, “About Jacks store: In 1948, I worked at Bell Telephone Co. We ate a big dill pickle for lunch from Ernie McCall’s next door, across from Central Market and with money saved to shop at Jacks!”

The writer continued, “I’m still wearing the $75 grey nylon coat with the mink collar. I’ve since kept the mink in a plastic bag on a shelf with my pocketbooks. I changed pocketbooks from the top shelf and the mink collar slid out of the plastic bag and fell down on me… WOW! I almost collapsed, forgetting it was the mink!”

And, the letter concluded, “I’m 88+ years of age and have quite a few coats and I still choose to wear my grey nylon with the Bromleigh… made in Hong Kong and the Jacks label around the top.”

That mink story was a much-needed laugh as I wrote this column, so thank you, writer friend! (And my apologies again for missing your name.)

1 comment on “Ask Joan: Starting summer with memories and miscellany”