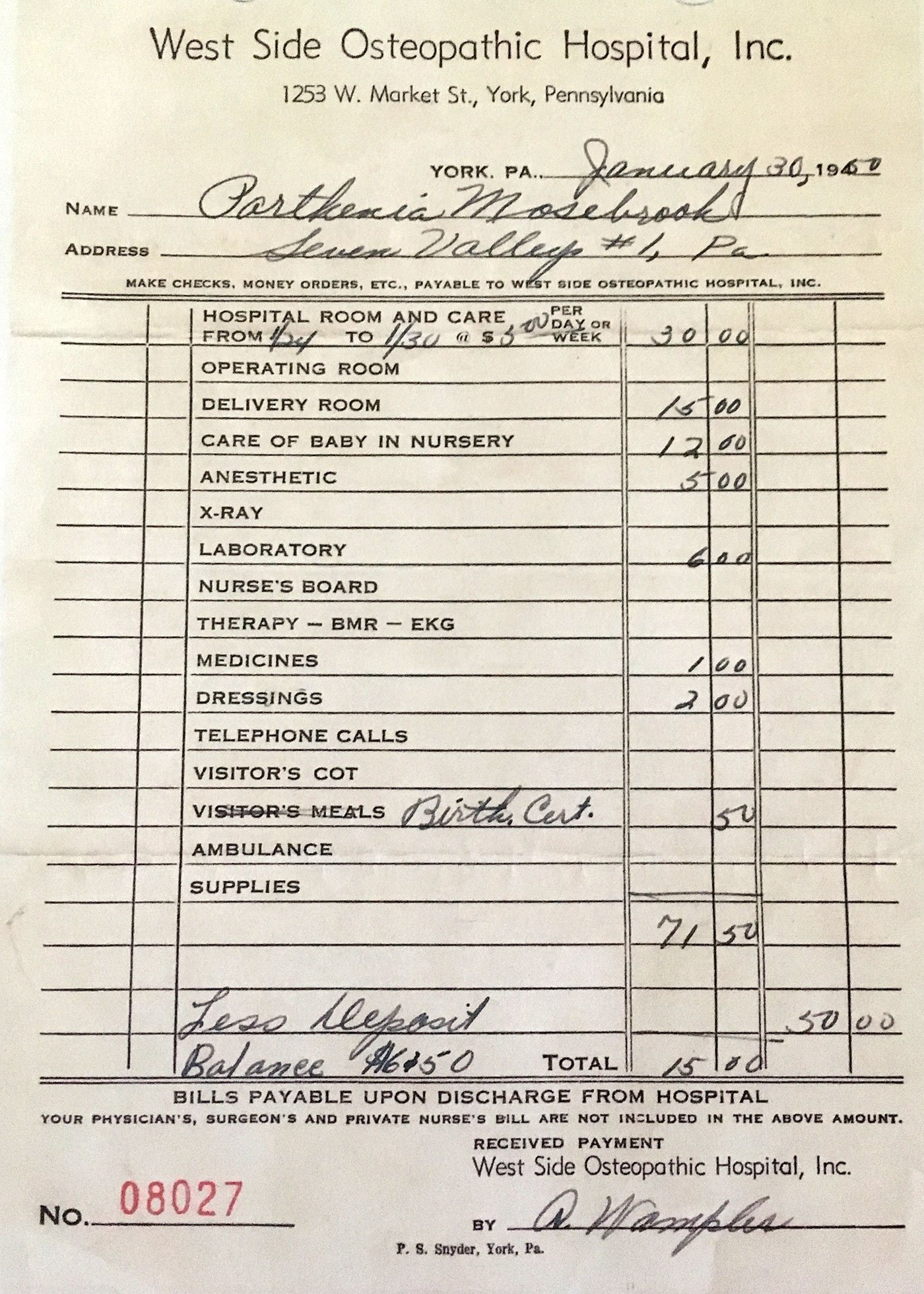 I’ve been writing a lot of columns recently with a particular theme – all about Huntley’s, all about an event I went to, that sort of thing. I thought it might be fun today to be a bit more random, so I’m sharing a few notes from my voluminous collection of postal mail.

As an aside, if you’re less a postal-mail person and more of a digital type, you should check out my columns online at www.yorkblog.com/onlyyork. We’ve recently given our online presence a facelift, and you can now comment directly on columns of interest. (Not that I mind postal mail or emails! But more options are good.) As a slight bonus: Columns appear online about a week before they appear in print, so you can get more Joan sooner. I did say it was a slight bonus. But hey, maybe you can impress your friends by “guessing” what the Sunday paper column topic might be!

1. A look at a 1950 hospital bill
2. Memories of skating at Playland
3. Recalling Festival Foods

Reader Lori Hash wrote earlier this summer and sent me something very neat, which you can see in the photo with today’s column.

She wrote, “Enclosed is a photocopy of the hospital bill from when I was born. I think it’s of general interest so am sending it to you to see if you feel the same. I wonder what the doctor charged!”

Lori said she was the first child in her family to be born at a hospital; her two older sisters were born at home. She continued, “I understand that West Side Osteopathic Hospital eventually became Memorial Hospital; perhaps your readers could confirm or correct that. Thompson’s Business School moved into the empty hospital building next, and I believe that after them the building was converted into apartments.”

She concluded, “My mother, still living in Seven Valleys and 95 years old, gave me her blessing to send you the copy of the bill.”

Lori, that’s phenomenal – not just the grand total of $71.50, but that your family has kept this through the years! And yes, you’re correct that West Side Osteopathic Hospital, previously West Side Sanitarium, was a predecessor to Memorial Hospital. You can read more about its history on Jim McClure’s York Town Square at yorkblog.com/yorktownsquare/west-side.

2. Memories of skating at Playland

I also had a letter from Fred Messerly of Red Lion, who began his letter, “I want to talk about Playland.”

Fred wrote, “A few of the old competitors from the skating club at Playland (The Golden Rollers) still get together for lunch at the Stoney Brook Diner. We meet about twice a year.” Fred noted that anyone who wants to get notifications of when that group gathers should call him at 717-246-7896.

During the group’s get-together in June of this year, Fred said, another skater, Ken Smith, gave him a copy of a previous column where I’d talked about Playland. Following that, Fred wrote to me with the following memories:

“I skated Dance, Pairs and Fours from about 1952 till 1957. The professionals at the rink were Jim and Nancy Wells. I ended up with Nancy’s sister, Pat, as my partner. Our Fours partners were Dale and Jeanne Hein. We skated at a national level for two or three years. We did not place in Nationals, but had a lot of fun.”

He continued, “Pat passed, but the three of us are still friends.”

Continuing on, Fred wrote, “Jim and Nancy would pick us up at York High and go to Joe Bury’s (next to the rink) to eat and then practice till the rink opened. Dave Sternburgh was the rink owner and gave me a job in the Skate Room. 50 cents per hour and free skating. Pat’s dad was a floor guard so she got free skating.”

“Almost every weekend we would travel to another rink for a dance contest. We sure had a lot of fun. The Golden Rollers had about 50 or 60 members.”

He concluded, “We now have about 12 of us that get together for lunch. Some others that join us are Buck and Jane Minnich, Rosemary, Glen Smith, Treva and George Gayman. We are all thankful for the fun and friendships from Playland. As far as I know none of us skate (old and retired).”

Fred, first of all, I am neither old nor retired but I am strongly guessing most of your group could still skate circles around me, as “graceful” and “coordinated” are not words ever used to describe me. But on a more serious note, I am thrilled that your group still gets together and I greatly appreciate you sharing those memories with us!

Reader Gary Lehman wrote earlier this year after seeing a mention of Festival Foods in a previous column.

Gary wrote, “If memory serves me correctly (about late 1970s) there was a Festival Foods where the Weis on Cape Horn Road is currently located. A Super Thrift on Route 74 closed and moved to Route 24 under Festival Foods.”

He continued, “Rumor had it people were offered jobs at the new location (if they worked at the old location) but lost seniority and started as new employees and could lose vacation. (If they had years of service and had three or four weeks’ vacation they may now get one or two weeks… the “just be glad you have a job” mentality.)”

Gary, thank you for adding to our memories of a grocery chain we have not talked about much in the past. I am certainly interested on hearing even more about Festival Foods.