Posted by Joan ConcilioMarch 11, 2011 Dover/West York, It used to be..., Local memoriesNo Comments

Photos of photographers’ photos: Another type of York County memory 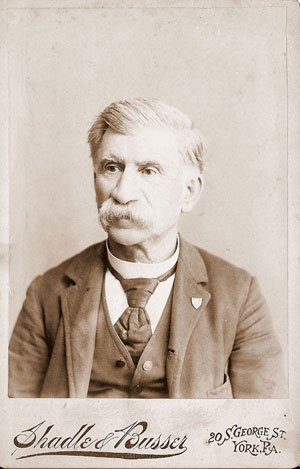 Frequent commenter and photo-submitter Dianne recently sent me a scan of the picture at right with the following caption: “James Alonzo Stahle was born in West Manchester Township, January 11, 1829. He served in the GAR as lieutenant-colonel of Co. A of the Eighty-seventh Regiment, and later as a PA State Representative, 1895-1897. He died on his farm near Emigsville, December 21, 1912. Photo taken from our family photo album.”

I think it’s pretty cool that Dianne’s relative was a representative, but I’m actually sharing the photo for another reason, and it ties in with something my friend Tracey and I have been talking about for some time.

You’ll see in the picture from Dianne that this image was from Shadle & Busser, 20 S. George St. in York. In Tracey’s family photo collection, there are also images from Shadle & Busser as well as many other photo studios. You can see some of them if you flip through the slideshow below.

So I’m wondering… do you have photos from some of these studios? Which ones? And how on earth did all these photographers stay in business within about six square blocks?