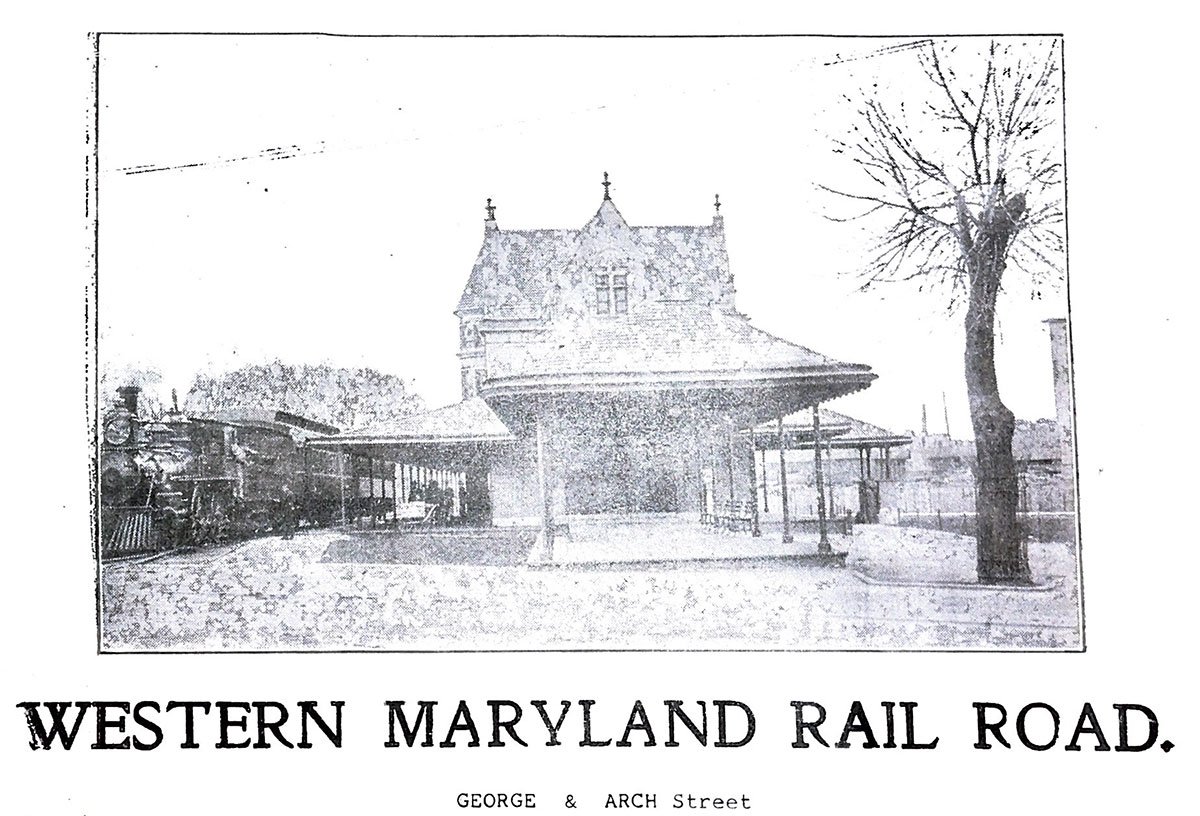 Reader Will Williams shared this photo of a former Western Maryland Railroad train station that was torn down to make way for a new service station in York in the 1960s.
Posted by Joan ConcilioJuly 17, 2020 Ask Joan, Local memories, York City/SuburbanNo Comments

Today’s column comes entirely from letters mailed to me since mid-March. Many thanks to my YDR friends and editors extraordinaire Susan Martin and Randy Parker for making sure they got to me!

1. More service station memories
2. The circus and the fair
3. Another Newswanger’s memory

Will Williams wrote after seeing a February column about the Chick’s Amoco service station on Parkway Boulevard.

Will wrote, “A little story about gas stations a couple blocks away on George Street… starting at Willis Run stream on North George Street, going south, you had the Texaco, the Esso, the Amoco and the Gulf on the right; on the left was the Sunoco station. Crossing the Codorus… at the corner of Arch and George Street, the gas station was Dale Stambuagh’s. A little story about that gas station – I worked part-time in the middle ’50s there. It had just a little office inside for the cash register; all the work that was done to the cars was outside. Tire machine, lube rack… to change oil in the wintertime, you had your work cut out for you. Very cold outside!”

Will shared the photo of the railroad station you see with today’s column; that’s the one that was torn down to make way for the new service station!

2. The circus and the fair

A recent letter signed RLM came to me on SpiriTrust Lutheran stationary and, I have to be honest, I’m pretty sure that I should know what those initials stand for, because I’m pretty sure the writer is a “regular.” But I could not figure it out, and I apologize, RLM!

At any rate, the letter was interesting and came in response to a column last fall in which reader Christopher Simonton Jr. asked for memories of York Fairs of the past.

My letter writer began, “More about the York Fair in 1932… There were 35 circus railroad cars on the tracks. They gave notice all horses had to be hidden… bringing in the elephants, giraffes, camels, ostriches and others. Then there was the ark, Noah, and his three sons, Ham, Shem and Japheth. You cannot forget the aerial and a race between a camel and a bicycle and Victor Zacchini the human cannonball, shot out of a real German Howitzer cannon… food, enter for a prize: apple butter, first prize, $1; biscuits, first prize, $1. The gas and electric company had this new thing called a refrigerator. On Thursday night, there was a public wedding on stage in full view of the audience, and they even gave a new auto away Saturday afternoon – ‘must have an admission ticket to win.’ You must have the cotton candy!”

“Us old people forget a lot,” the letter was signed, but I say my older readers are doing amazing at remembering so many things and I appreciate them greatly! But, please, if you would, sign your full name for me!

I also had a letter from June Knighton who write, “I am 91 years old, thus the cursive! I worked in the office at Newswanger’s Shoe Store a number of years, and my mother, Frances Beaver, was the top salesperson there for 35 years. Each Christmas at our dinner, she would recite a poem that she composed. I can remember Mr. Newswanger asking her prior to our dinner, ‘Frances, do you have your poem prepared?'”

“I also have an original watercolor of the York square painted by Jean Gaily, hanging in my living room, that once hung on the wall of Newswanger’s Shoe Store… I went to work there in 1959.”

June, thank you so much for sharing that! I am so glad that painting found a good home with you after Newswanger’s closed, too.