Even more memories of Peoples Drug

Today I’d like to share some memories of a former downtown store that MANY Yorkers seem to recall fondly – Peoples Drug!

Since I shared those posts, I’ve received dozens more memories, and would like to share a few here today!

Sylvia L. Snellbaker wrote, “I worked at Peoples Drug Store from 1970 till 1973 behind the soda fountain with Lillian Eckenrode and Lucille Dehoff, and Charles Dohn who came in after school to clean up. We were really busy back in those days with all the downtown stores in full operation, and of course we had our daily regulars, people getting off from work stopping in for a quick sandwich before heading home. One of my fondest memories was the hippies, they loved to hang at the lunch counter. (Back in those days they didn’t have cell phones.) And they would sit sipping a soda waiting for the phone to ring, every head would turn in anticipation that it might be the call they were waiting for, that phone booth sure got a workout.”

She continued, “We may have been a small lunch counter but the food was tasty, we sold a lot of club sandwiches and ice cream, soda, milk shakes and floats. Mr. Spangler was the manager and Mr. Jackson was the pharmacist. Working behind the pharmacy counter was Pat Kerrigan, and behind the candy/cigarette counter was Ruth McDonald, I still run into Ruth and Lillian and we always talk about the good old days at Peoples drug store.”

Sylvia shared three great photos from her time working at Peoples today that I want to share as well! 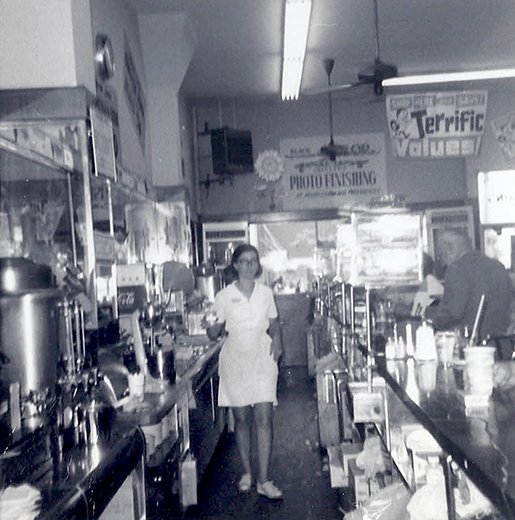 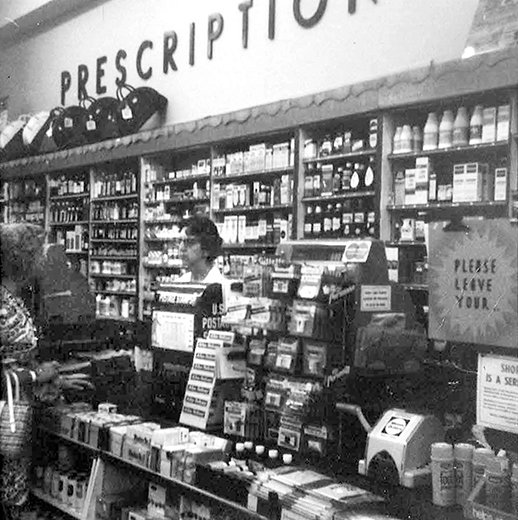 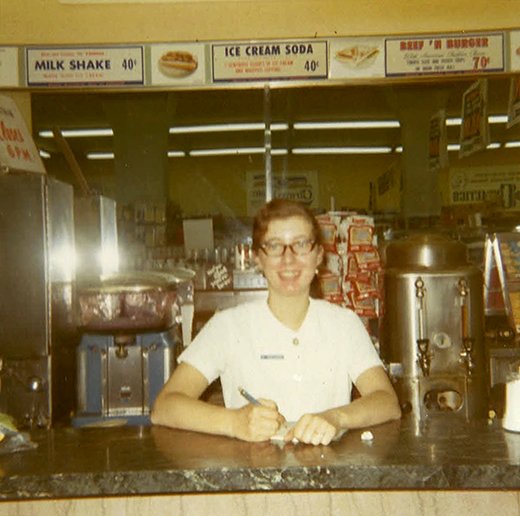 From Harriet Harman, I heard, “I would like to comment about People’s Drug store. Evidently, in the late 1930s and early 1940s there were no kitchens at the stores to cook for the lunch counters, because my grandmother cooked at home, in our kitchen and someone would come to the house and take the soups, stews, etc. to the stores to serve at lunch time. I have no idea how many women did this, but I know that grandma did it, 5 days a week for $10 a week. I was just a little girl at the time, but I remember it well.”

And from Jim Fahringer I heard, I don’t remember the Peoples Drug Store at the corner of West Market and Beaver Streets but I do remember The Peoples Drug Store on the southwest corner of Continental Square in the first floor of the Colonial Hotel. I loved their old fashioned soda fountain. Back in the late 1950s and very early 1960s I was a member of Boy Scout Troop #132 of the First Moravian Church at 39 North Duke Street. On Easter Eve the Boy Scouts camped out at the church so they could get up real early and go to Prospect Hill Cemetery to direct cars to the Easter Sunrise Services. Of course we had fun sleeping in the Fellowship Hall or not sleeping as was often the case. In those days Peoples on the Square was open all night. Well, about 10 or 11 0’clock that night we decided to walk down to the drug store and have a late night snack at the old soda fountain. I ordered the old fashioned cherry Coke – the one made from real cherry syrup – and some of my friends ordered ice cream sodas. The cherry Cokes of today are nothing like those cherry Cokes at a real soda fountain.”

He continued, “Sometimes I would shop for cards in the drug store – however, later I believe a separate Hallmark Card shop opened in the northern part of the same building. It was comforting having a drug store open all night right in the center of the city.”

2 comments on “Even more memories of Peoples Drug”