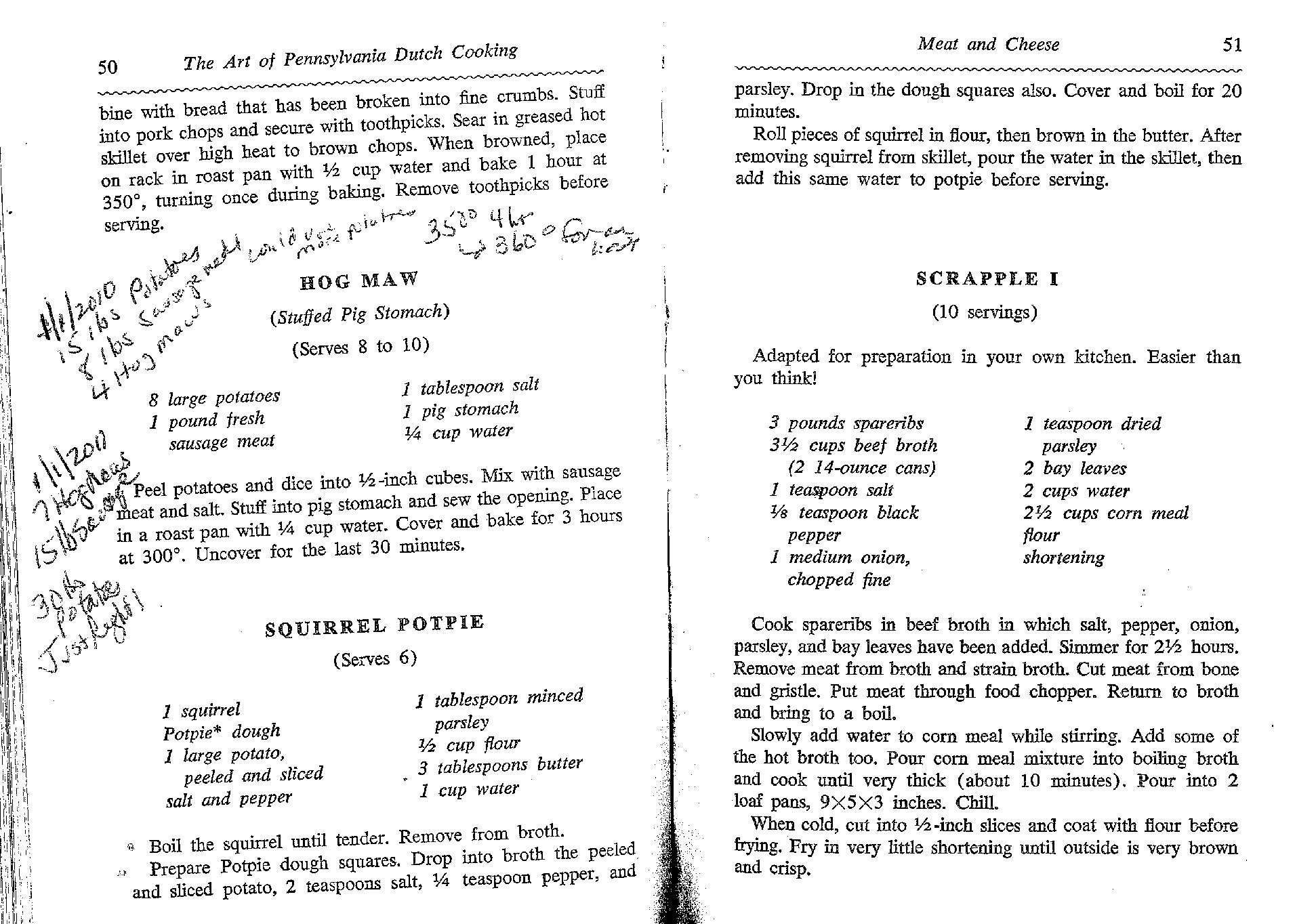 This page from MaryJo Kraft's copy of "The Art of Pennsylvania Dutch Cooking" includes her notes on past years' hogmaw-making, including the "just right" year with seven hogheads, 15 lbs. of sausage and 30 lbs. of potatoes.
Posted by Joan ConcilioJune 10, 2018July 23, 2018 Things we eat1 Comment

The Art of Pennsylvania Dutch Cooking: A dive into a cookbook

Switching gears from local memories today, I’d like to enjoy something more… edible.

MaryJo is an amazing cook, so when she shared these with me (QUITE a while ago), I knew I’d have to find time to post them. I hope you enjoy!

I’m including all recipes here just how they are written in “The Art of Pennsylvania Dutch Cooking.”

Peel potatoes and dice into 1/2-inch cubes. Mix with sausage meat and salt. Stuff into pig stomach and sew the opening. Place in a roast pan with 1/4 cup water. Cover and bake for 3 hours at 300 degrees. Uncover for the last 30 minutes.

You’ll see in the photo with today’s column (see a larger version here) Day 2011, included seven hog stomachs, 15 lbs. of sausage, and 30 pounds of potatoes, and was baked at 350 degrees for four hours and 360 degrees for an hour. She declared it “Just Right!” You can also see a recipe for squirrel potpie in that photo, if you have any small-game hunters in your family.

If you’re wondering why this is Shoo-Fly Pie “II,” it’s because there are three total recipes in this book – a “dry” kind, a “cake” kind, and this one, the wet-bottom, which I think most readers would vote as a favorite.

The recipe starts, “This one has a ‘damp zone’ next to the crust. It is sometimes referred to as the ‘wet-bottom shoo-fly.’ Most people prefer this one above the others.”

Beat the egg yolk in a small bowl. Blend in the molasses. Add the boiling water with the soda dissolved in it. Set aside.

Combine dry ingredients with shortening and work into crumbs with fingers. Put liquid into pastry shell and top with crumbs. Bake in a 400-degree over for 10 minutes, then reduce heat to 325 degrees and bake 35 minutes longer.

With this one, you can certainly use any kind of pie crust you prefer – homemade, storebought, etc. I can’t believe I’ve never shared our family’s pie crust recipe in this column, so maybe I’ll have to dig that out for a future edition! I have, however, shared MANY pie recipes in the past, which you can find by typing pie recipes into the search box at www.yorkblog.com/onlyyork.

This recipe begins, “This is tops in good eating. In Lancaster County the Ladies of the Fire Company Auxiliaries have gained renown for their Chicken Corn Soup suppers. Long lines form outside the firehouse awaiting word that the soup is being served.” (This is also true in York County, at many churches, fire halls and more, I’d add!)

In a large stewing kettle, cover the cut-up chicken with 3 quarts water. Add the salt, pepper and saffron. Stew until tender. Remove chicken from stock and set aside the breast and legs for future potpie. (You can reserve 1 cup of stock also, if you wish.) Bone the rest of the chicken, cut into small pieces, and return to stock to chill thoroughly. Before reheating, skim off most of the fat from the top. Add noodles and corn. Boil 15 minutes longer. Add the parsley and chopped eggs before serving.

The recipe notes that knepp may be substituted for noodles, which brings us to today’s last recipe…

Crumble together the butter, flour and salt. Moisten with the water. Stir and beat until the mass forms a smooth ball. Drop tiny bits of knepp, just about 1/8 teaspoonful at a time, into the boiling broth or soup. Boil for 5 minutes.

Among the many other recipes in this great book are something I had never heard of, called Apeas Cake. The cookbook says:

“Also called Epee Kuche. The name is often confused with A.P.’s Cookies. However, this is the breakfast cake of Berks County, where it is as popular as Shoo-Fly Pie, and that is very popular! Most cooks bake from four to seven at a time, sizes ranging from five to nine inches in diameter and as high as four inches.”

I didn’t copy the full recipe for the cake, so I can’t share it here today, but I’d be very interested to hear more about it from anyone who has made or eaten it!

A fall favorite: Schnitz and knepp

1 comment on “The Art of Pennsylvania Dutch Cooking: A dive into a cookbook”