You thought you’d heard the last about being “strubbly,” or ill-kempt/disheveled, didn’t you?

Then came a letter in the mail from Lorraine of York about her experiences with the word; and THEN, I got the most recent copy of the Pennsylvania Dutch Heritage Group’s newsletter, which featured a photocopy of some entries from “The Comprehensive Pennsylvania German Dictionary, Volume Nine: S,” edited by C. Richard Beam and Jennifer L. Trout.

This dictionary seems most notable to me for its use of different varieties of the word in phrases, like Die Fraa is ganz schtruwwelich, which translates as “The woman is completely disheveled.” (Hey, stop talking about me!)

Another one I like is Du guckscht so schtruwwlich, which means “You look uncombed.” I want to work that into a conversation sometime soon! Think I could get away with saying it to someone I don’t like?

Here’s a look at my copy of the Pa. Dutch Heritage Group’s copy! 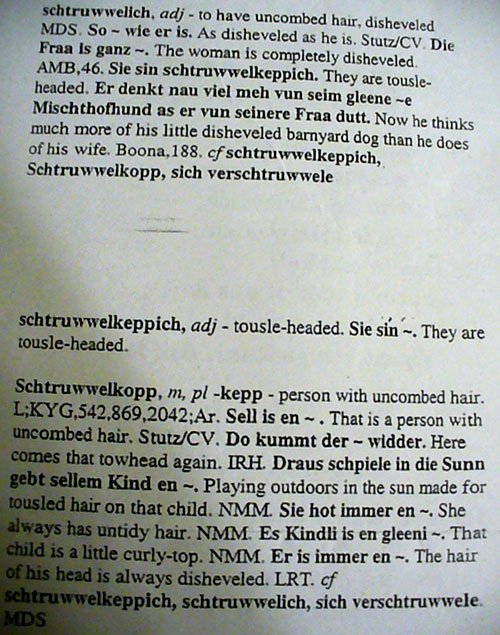 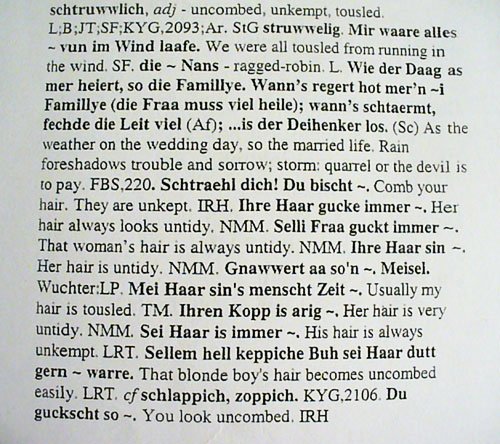 Meanwhile, in the letter I mentioned from Lorraine, she writes, “I had to smile when I read your column about ‘strubbly.’ I think that word was used with the folks that spoke Penna. Dutch. I remember my great-grandmother used to say that to me and my cousin. ‘Go comb your hair, you are so strubbly!’ She only spoke English to my cousin and I. Everyone else it was Penna. Dutch. Sorry to say, I could understand some but not enough to ever really speak it. My great-great-grandmother was 101 and 7 mos. when she passed and she only spoke Dutch, never English, and I don’t think she understood English, as my great-grandmother always explained everything in Pa. Dutch.” Lorraine had some other cool stories to share about her family’s journey from Germany to the U.S., and hopefully we’ll hear more about those in the future.

But, for now, do you think we’re done with strubbliness? Only time will tell, right?