Mail call: Memories of the National House from Marvin Stine

I received a letter earlier this year from Marvin Stine about the building pictured above. For those unfamiliar, this is the National House in downtown York, a building with many former uses.

It was once the White Hall Hotel, and later the site of Jack’s, a well-known local clothing store. (Read more about Jack’s here and here.)

Later, it became a set of apartments; in fact, my boss, Randy Parker, lived there at one time, and has stories to tell about possible National House ghosts – who locked him out! (Go, ghosts!) 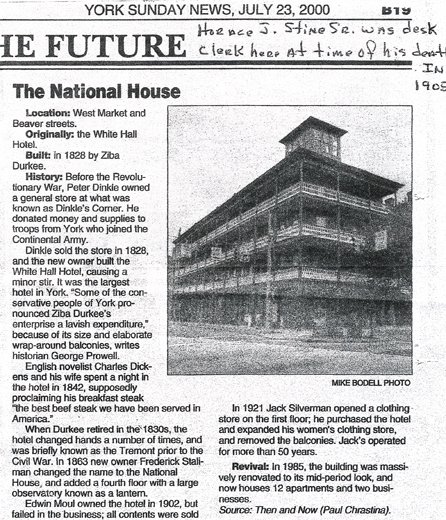 In Marvin’s letter, he shared the clip above and writes, “This information may add a little more to what you now know about this building.”

He adds that he has a different picture of the building, circa 1870, and says “There are some people on the balconies and a two horse enclosed vehicle stands in front bearing the name ‘National House’ on the side. This came to me from my father, Horace J. Stine Jr. Horace Sr. was desk clerk here at the time of his death in 1905.”

Marvin, thank you so much for sharing! I’d love to hear any other memories of this cool downtown landmark!