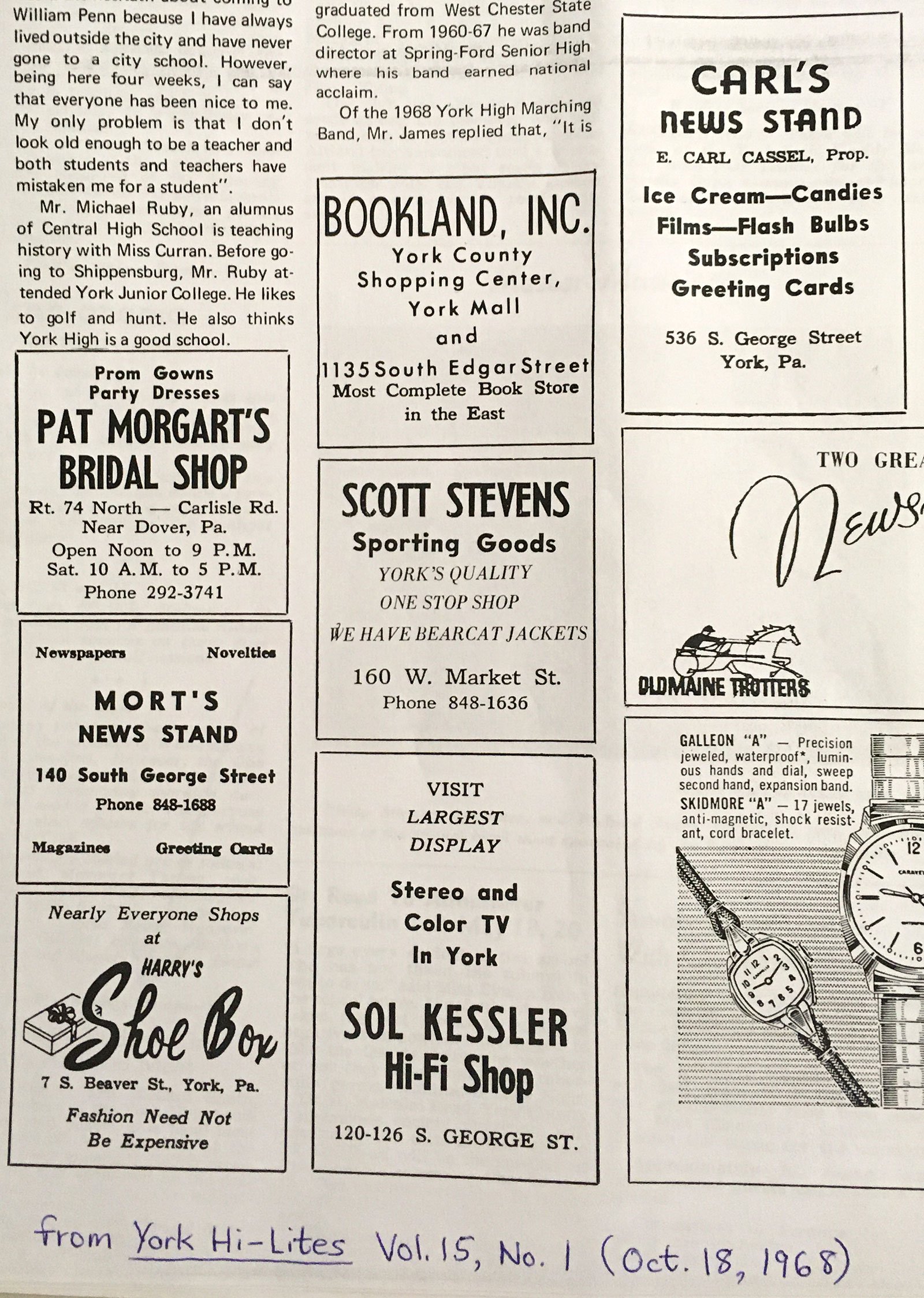 Last week, I went for the oldest letter in my email inbox as the topic for this column; this week, I’ve switched it up, and this information comes from the oldest piece of print mail on my desk.

This one is a double bonus, in that I have a much newer letter from the same author on a related topic, which you’ll get to hear more about next week.

For today, though, I’d like to let John N. Fishel of Dallastown – who has a truly phenomenal knowledge of many of York County’s former stores and restaurants – start by providing some information about Mort’s Newsstand.

John has been kind enough in the past to share information I could not find elsewhere about Franklin Discount, J’s Atlantic City Giant Submarines, Huntley’s and W.T. Grant, to name a few.

To add to his knowledge, I also have to give John a shout-out because he has incredibly neat writing, which is valuable in that sometimes deciphering print letters can be tricky – but not in his case! In fact, that’s a teaser for yet another column coming up soon – I had some incredible help from the Pennsylvania State Archives on a recent handwriting mystery, and I can’t wait to share that!

John originally wrote to me after reading a 2016 column in which one reader recalled a newsstand near Pep Boys on the west side of South George Street as Carl’s Newsstand. John knows a lot about both businesses, both of which were on the same side South George Street, and wanted to clarify that the one near Pep Boys was Mort’s; Carl’s was farther out near Boundary Avenue, owned by E. Carl Cassel, who we’ve talked about in the past.

Mort, though, we have not discussed very much, so I’m glad to get to share John’s details on him, which begin: “Mort’s was owned by Morton ‘Mort’ Feder. As a comic book fanatic, I started buying my comics regularly at Mort’s when I found out that they put the latest batch of comic books on display for sale on Fridays, earlier than anyone else that I knew of.”

He continued, “Previously, I used to get my comics at Bookland on Edgar Street, which put them on display on Sundays. Every other news dealer that I knew of didn’t put the new ones out until early in the next week.”

“Since I couldn’t drive yet and lived way out at Jacobus, I had to bug my dad to take me to these stores,” he noted. “When I started going to Mort’s, I usually went on Saturdays at mdiday when my parents often went to downtown York to shop.”

He noted that Mort retired and sold his business to Dane Slenker of Jacobus in the summer of 1977; however, Mr. Slenker died just a couple months later, and Mort temporarily took back control of the newsstand, John noted, before closing it permanently on Dec. 31, 1977.

John continued, “Around 1980, the building which had housed Mort’s and surrounding businesses was torn down and the McDonald’s restaurant was built that still stands there today. (McD’s sits a bit back from the street whereas Mort’s and the other businesses were right along the sidewalk.)”

“Unlike some newsstand operators who were hostile toward kids (probably because some of them were juvenile shoplifters), Mort was always nice to kids. (So was Carl at Carl’s Newsstand, judging by the times that I went there),” he added.

“I have fond memories of Mort’s Newsstand. The location, with the bar next door, was always hopping. I still recall numerous times when, while I was perusing the comic book section, which was toward the back of the long, narrow store, hearing individuals using the nearby pay phone at the rear of the store to call in bets to their bookies, presumably after examining the daily racing form purchased there at Mort’s – fascinating stuff for a kid.”

John noted that Mort had a brother nicknamed “Babe” Feder who also owned a newsttand in the 300 block of South George Street, on the east side, but he didn’t recall going there. He said, “I did sometimes go to Jones’ Newsstand in the first block of West Philadelphia Street near the Central Market and later worked with the son of the owner, Luther Jones, when we both worked in the York Dispatch circulation department in the 1980s.”

John had a question about a specific other newsstand as well, which he mentioned both in his 2016 letter as well as the one I’ll share next week. He wrote, “I recall a little hole-in-the-wall newsstand located on the north side of West Market Street in the 100 block (between Beaver and Pershing) sometime around 1967 or 1968. I remember it to this day because I was rudely thrown out of there. My only offense apparently was because I was a kid. I was only 10 or 11 years old, and went in to look at the comic book display located just inside the door. As soon as I entered, I was asked which comic book I wanted. I told them that I wanted to look them over first and was told ‘no looking’ and thrown out.”

John said he recognized the potential shoplifter problem, but added, “that wasn’t my intent – I was honest. It’s funny how this is something that happened 51 or 52 years ago and it still hurts.” (In his other letter, John wondered, if the business didn’t like kids so much, “why’d they sell comic books then?” Definitely a fair question.)

So, if anyone recalls what newsstand that might have been, I’d certainly be interested, and John said he would too – “Newsstands were fascinating places… There were plenty more newsstands around which, as a kid who couldn’t drive, I never shopped at, but would be interested in hearing about.”

So if you have any newsstand info to share, please be in touch; next week, I’m going to share some of John’s information about Carl’s Newsstand as well as another question I’m hoping we can answer for him!

1 comment on “Recalling Mort’s Newsstand, and another newsstand question”