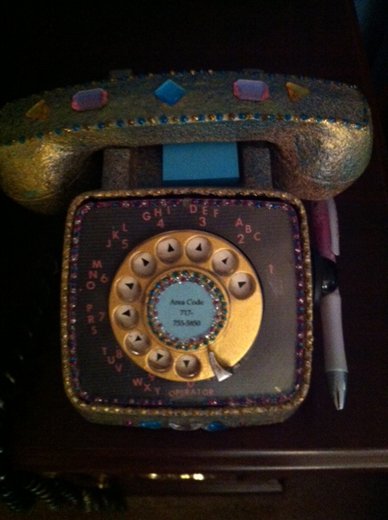 Following that, I received the photo above (from Brenda Neff) as well as memories from Brenda and several other Yorkers, which I’d like to share today!

Brenda Neff, who shared the photo of the phone above, also shared the story behind it. She writes, “I can remember when the East York exchange went from 47 to 755. I have the original rotary phone from my parents’ house from 1955 when they first moved in. A friend blinged it up with glitter and gems and gave it to me as a gift. It sits on the nightstand next to our bed. … There’s just something about holding a phone handset. It’s like the feel of a newspaper in your hands. There’s something missing with new technology.”

Not regarding the beauty of phones themselves but of buildings related to them, Betsy Baird writes, “Who can remember how beautiful the inside of the American Telephone Co. on first block of South Beaver St. looked? Beautiful it was. They don’t make placed like that anymore!” Betsy also mentioned how beautiful it is inside the York Water Company, and that’s actually a topic I’ll be talking more about – and seeking memories of – in the near future, so keep that building in the back of your mind!

And Melanie P., back on the topic of phones, writes, “I still remember my grandparents’ old black rotary phone, I wish I had it now. It sat on the desk in the front room just opposite the front door. Sometimes it gave a short ring or two instead of the usual longer ring; I don’t remember for sure, but I think Grandma said it meant that someone else on the party line had picked up the phone, or had just hung up. I was young enough then to wonder how she could stand not picking up and listening in on all those conversations! LOL! I still remember their phone number – wish I could dial it today and have them answer!”

I also heard from Jason Gross, who said, “In the ’50s in Dover, the only phone in town south of the creek (that I knew about anyway) was at the veterinarian’s office two doors from our house, so any calls were made to and from his office. The operator was further north on S. Main St. across from my grandparents’ house. Later when my sister became a nurse at York Hospital we were able to get a phone so she could be contacted. This was later a party line with several of our neighbors, our number was 3301.”

And finally for now on the topic of phones, I heard from John Loeper, who writes, “Remember in York from the mid ’60s to the mid ’70s when you wanted to make a long-distance call you had to dial 1 and then the area code and number… then a live local operator would come on and ask for your number. You spoke it into the phone and the call would then be connected. You could give any number you wanted to give as long as it included one of the York area exchanges… (the first 3 numbers). Wonder how many folks did this to make “free” long distance calls that ended up being charged to somebody else?”

Ouch, John! I admit that sounds like something I might have done at the time, but I’m ashamed to say so! 🙂