Joe Fink wrote, “I read your article … about the York County Shopping Center and it brought back memories. I remember that Food Fair was located where Red Lobster is now and the Acme was located where Office Max is currently located. One of my favorite stores was Rogers Toy Store. Originally it was located near the Food Fair and in later years, the Acme moved out and then Rogers moved into that location. It gave them much more room. Other stores I remember being there were Joe the Motorists’ Friend, Bookland, Rexall Drugs, The Bowling Alley in the basement, The Electronics Place, a barber shop, Jewelcor (my daughter worked there), The Embers was in the back on the lower level, and one place nobody has listed, and that is Jack Horner Shoe Store. And, there was at least one 5 & 10 Store, probably McCrory’s. By the way, the parking lot was a lot easier to maneuver in then. There were no islands as it is today. In fact, many kids learned to drive in the back parking lot because it was so big and not used very much.”

Joe also adds, “Here is a challenge for you. I noticed that the picture you received from Gene Schenk that you used in the article showed the area around the shopping center. I saw that east and south of the shopping center there was a large oval area resembling a race track. It appears to have either cars or trucks parked all around it. I do not remember what that was. I discussed the picture with several of my friends at work and they did not remember it either. What was it?”

I would love to know that as well!

Janice Rehmeyer said, “I remember the growing up years and shopping downtown on Fridays and Saturdays. So I wonder if any of your followers remember the York County Shopping Center? Late ’50s-’60s. The Little Toot Train that ran in the back parking lot. Yes, my mother and father ran it and we and others would ride in it. Buy tickets and ride around the lot. Mother even sold balloons.” That was a memory I had not heard before, Janice, so thank you very much for shining a light on it!

Stephen H. Smith of Yorkspast helped me out in response to that W.T. Grant question I mentioned. He said, “W.T. Grant was one of the original stores in the York County Shopping Center. Here are some of those early stores in the side section of the original shopping center which still stands: Food Fair, Shelly Jewelers, Spiegel Catalog Center, Jack Horner Shoes, W. T. Grant, Feller’s clothing store, Riddles’ Appliance, East York Bowling Center, Chalfant’s Barber Shop, and the Embers Restaurant on the lower level next to the circular fountain.”

(I must also add as a side note that in response to the same question, Jim Fahringer mentioned that there was also a W.T. Grant Store farther east, he said in the late 1960s to mid-1970s. “This Grant Store was located on the north side of Route 462 between MacDonald’s Drive In Restaurant and the Shoe House Road when traveling East on Route 462. When Grants left that building, Danskin Inc. took it over. There may have been a church in there at one time. I believe there is some kind of Day-Care Center there or some kind of trucking business. There was also a supermarket there,” Jim noted.)

Back to the York County Shopping Center, Betsy Baird said, “Well, I know that when the Shopping Center first began, I think it was W.T. Grant Co. which occupied that spot. It was followed by Feller’s Clothing Store. Feller’s sold nice women’s and men’s clothing, and was still there in 1976. Think it closed some time after that. And, yes, the bowling alley was downstairs in back of it. Wish they still had stores like Feller’s and not all these chain stores! Where the shopping center turned at right angles to face south, Rexall Drug Store was. And it also had a had a small fountain and restaurant. Those drug store restaurants everyplace have long ago disappeared. Wonder why? Aside of Rexall, Bookland made an appearance. That was a favorite place to look for books, as well as the one on Edgar St. The other end of shopping center had, as you already know, Acme Markets. Later a toy store. Aside of the toy store were numerous small stores. Lucille’s for women’s clothes was there later. Name changed to, I think Eastern Clothing. Also, DeVono’s and a gift/card shop. These were still there after 1986. Forget what the names of other places were – all nice stores, though. … I do have an old postcard of the shopping center, when it began. These stores and Sears were among the founders of East York and the growth of Haines Acres! Jewelcor is the other store that stood where W.T. Grant and Feller’s were. I bought some things there, but forget which stores – Jewelcor or BEST – I bought them from.”

Randi McCullough had asked about a particular one of these stores, saying, “Thirty or more years ago there was a department store in the York County Shopping Center… It was in the middle of the strip. I think it later became Menchey’s Music. I am trying to find out the name of the store. When you entered there was an open staircase that went to the lower level.” I’m sure it’s one we’ve mentioned today, Randi, though I’m not sure which one in particular it might have been; any clarification from anyone?

I also heard from Karen Miller, who said, “I used to work at the York County Shopping Center when I was in high school. At that time there was a W.T. Grant’s store that I was a cashier. After I graduated I worked for Drovers Bank and again worked at the YCSC. I was trying to think of the name of the clothing store that was near the bowling alley. It might have been something like Fuller’s? Any clues. And the picture you had a few weeks back of the YCSC I am curious if anyone knows what the large race track is on the top right side of the photo. It would be right off of the now Eastern Blvd.” That’s the same question Joe had, so I am now REALLY curious, and I think we’ve figured that the store must have been Feller’s!

Jackie Korte said, “I worked in the York County Shopping Center in the 1960s at Kay Hershey’s Beauty Salon. The grocery store when I worked there was Acme. It was located at the end where Lowe’s is. The beauty shop was next door to Drovers Bank. The shops below us were Pittsburgh Paint, a shoe repair shop (I don’t remember their name), a barber shop and an insurance company. When the shopping center opened I believe where Red Lobster is now, was an Italian restaurant. There was a Grant’s and McCrory’s. Grant’s had good hot dogs on square buns that were toasted. Also, McCrory’s had good sandwiches. But the best was the turtle candy at Sears. A lot of good memories from the York County Shopping Center.” 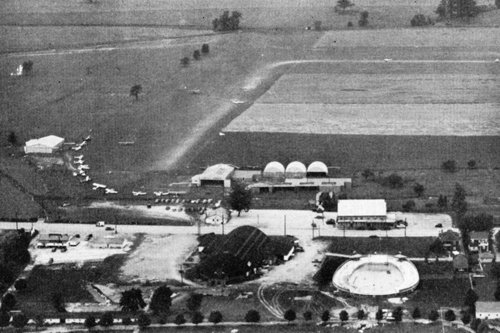 Finally, I received the photo above and the following information from John Ness regarding the same general area.

John writes, “Joan, saw your writeup about York County Shopping Center. Attached is a picture of York Continental Airways, York Valley Airport. I copied it from a postcard loaned to me by Herb Chronister. We both worked at one time for Advance Auto Parts which is now across from York Market Place. I recall and incident that happened at the airport. Dr. Levy from Wrightsville was learning to fly from that airport and came in too low and hit wires and crashed while attempting to land. He was badly banged up but fortunately was OK and continued to practice. This was probably in the ’40s or early ’50s before shopping center went in.”

Thanks to all for sharing these – I actually have EVEN MORE memories to come next week regarding the grocery stores specifically, so I hope you’ll check back!