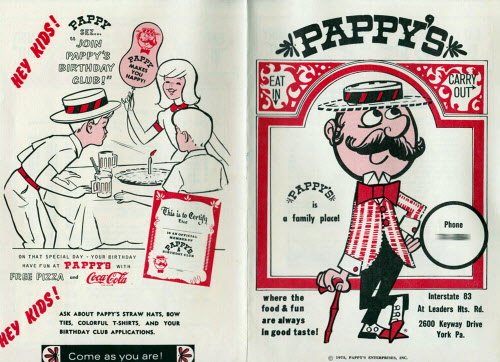 We had talked in this post almost 2 years ago about Pappy’s Pizza.

More recently, I received an Ask Joan question from Maria Weigel, who wrote, “Does anyone remember a restaurant called Pappy’s pizza? I think there was one in Leaders Heights. I was wondering if there were other locations in York? We had our birthday parties there when we were kids in late 1970s. They had a player piano & it was a great family restaurant.”

In addition to that earlier post, I have some other Pappy’s memories to share today for Maria and others. Dig in!

Ben Lightner writes, “This is so funny. I remember Pappy’s. When I was little we lived on Fair Acres Drive in Leaders Heights. We used to eat there all the time. I liked it so much I called my grandfather Pappy. And yes, That location did become Mr. Bill’s.”

And Sandy Lightner said, “I too remember Pappy’s and ate at Mr. Bill’s often. Such a shame that now the building has been torn down.”

J. Schell noted, “Who could forget Pappy’s? What I remember is the player piano that they had.”

And Scott C. offered more details, including: “Pappy’s became Mr. Bill’s Quarterdeck in the early 1980s. It was sold in 1999 and became Duets Chop House & Speakeasy. It became Leader Heights Diner in 2004.”

I heard from two regular commenters with the same name, as well! Melanie W. also said, “We used to eat there after church on Sundays. I loved to go there and I also remember the player piano. What great memories.”

And Melanie P. writes, “I wish I had some memories of this place, it sounds fab! But alas, we never stopped in on any of our many trips up to visit the grandparents. The prices listed are killing me! Oh, and I’d love to try pizza #22: ‘The Woiks (Your heart’s desire–the kitchen sink!)’ ROFL!” (Make sure you check out the larger versions of the menu here!)

Pete Brady added an extra location. He writes, “Pappy’s Pizza also had a place in East York, it was located right next door to the old Rollerway – where Wendy’s is now. I am pretty sure it was open before the one in Leaders Heights. It became an Arby’s for a short time before becoming a Wendy’s.”

Doug Markle commented, “Yes I too remember Pappy’s Pizza. We moved to that area in 1975 and Pappy’s was a new place then and new favorite! I still have that same menu somewhere! Also remember that piano and looking through that big window @ the people making pizzas.”

Finally, Denise Holtzapple noted, “If you are looking to hear a nice story about Pappy’s, we have friends who met while working at Pappy’s as teenagers, dated, married and recently took their teenage children to the only remaining Pappy’s so they could show them ‘where it all began!'” That IS an awesome story, Denise, thanks for sharing!