More on the former City Market, and on York’s other farmers’ markets and their history

Today’s post ties together two recent letters from people I consider both regular commenters and friends – since we correspond so often!

First, Betsy Baird recently wrote to me: “O.K., here goes a different topic from something we were talking about! The first market of York consisted of ‘sheds’ in the Continental Square. They were completely burned down by fire.”

She continues – “City Market on S. Duke St. They NEVER should have torn that market down, and the old YJC aside of it. Those WERE real historical architectural buildings which, if the City had waited about 5–10 years they would have been determined to try to preserve. City Market was of very unique architectural features so different from buildings of today. More resembling turreted market in Europe & Germany. People of today would have loved seeing how it stood there on Duke St. Central Market on N. Beaver & W. Philadelphia Streets has its own, different architectural features.”

Next, Betsy talks about Farmers Market, at Market and Penn Streets, where my family had a candy stand for many years, called Joan’s Candy Corner. (Before that, my mom operated a bake stand there, Mom’s Kitchen, the sign from which still sits in our home!)

Betsy says, “Farmers Market at corner of W. Market & S. Penn Streets also has its own architectural features. This area was also known as ‘Bottstown.’ Farmers Market was a bustling market of meat, fruit, vegetable, fish, bread, cake/pie/cookies – the works. It was not cluttered with all the ‘junk’ stands … However, I haven’t been in Farmers Market in years. I believe it is now cluttered somewhat.” She also adds that she knows about the improvements being made, especially at Central Market, but adds that Central “serves largely the lunch crowd.” (It definitely does spotlight its food vendors well, but I think in recent years the area in and around Central Market has become a great local-artisan destination!)

But, she recaps, “City Market outdid these two. There also was a market house where DreamWrights now stands at W. Philadelphia and Carlisle Rd. Its architecture resembles that of Farmers Market. There was a market in back of MacDonald’s Movie House, 480 E. Market St. I think it was called Eastern Market. It was burned down in the 1950s. I guess that is where the current Eastern Market on Memory Lane got its name as ‘New’ Eastern Market. Eastern Market is more like Farmers & Central Markets were in the ‘Good Old Days.'”

Finally, she concludes, “Some years after City Market was demolished, a small market was set up in the former A&P Food Store in the 600 block of S. George St. It helped people in South York get home grown products and meats, but it did not last long. There were small farmers markets in the County Boroughs/Townships. But the ones mentioned above were/are the real farmers markets for York. I haven’t been there for several years since I can’t drive and know it has changed, again.”

Within days of receiving Betsy’s letter, I got another, this time from another regular correspondent, Audrey Lerew. And Audrey was kind enough to include this image, clipped from the York Daily Record, of a postcard showing HER favorite market. 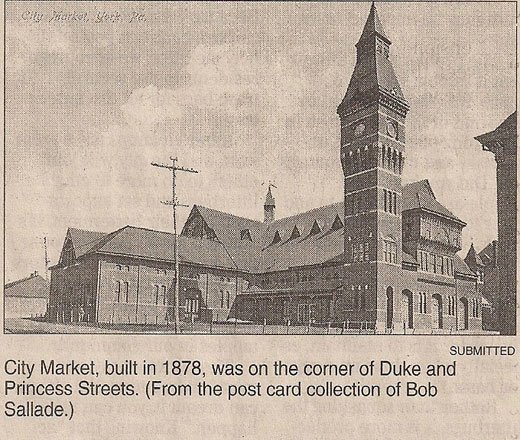 Audrey writes, “Everyone talks about the Central, Farmers and Eastern market but so many forget about the original City Market which was located on the corner of South Duke and East Princess St. The very corner had a A & P grocery store (I worked part time there as a kid). On the Duke St side, there was Blums Auction and then the market. This post card is showing the Princess St side. I lived across the street in the alley. Originally it was a cemetery. The bodies were pulled and moved (as I remember I believe they were taken to Prospect Hill Cemetery). It was a real family market where everyone knew everyone. My dad used to make things from wood, bird houses, etc., and he rented a stand and I sold them for him. That was around 1950. The big bakery then was Fox’s Bakery. One room towards the back was where the meat stands were located. Farmers came in from the country with their products to sell. It was a real true farmers market very full like the Eastern market. Also the Steelworkers Union had their office and meeting room on the second floor. In the rear of the market was the original York Junior College which faced College Avenue.”

She concludes, “The market house was eventually torn down and made room for a gas station and used car dealership. What a terrible waste. I always saved this picture from the papers because everyone thinks I am crazy when I tell them a market house was at that location.”

Audrey and Betsy, thank you both for bringing up this topic – while we’ve mentioned markets before in the past, we’ve never gone in depth on memories of City Market, and I hope your letters will spur more thoughts on it! (If you’re interested, Jim McClure has a WEALTH of info on York’s markets; start here and just keep clicking to read more!)