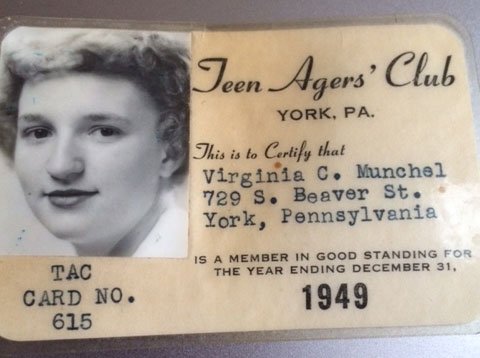 Since then, I have received not only more memories but a neat piece of memorabilia, which I’m thrilled to share here today.

The picture is from reader Brenda Neff. She wrote, “You had previously written about TAC. This is my late mother’s membership card. She graduated from York Catholic in 1949. She would have been 18 in this picture.”

Brenda also shared an image of the back of the card, which you can see here. “Love the no horse-play or petting!” she wrote. 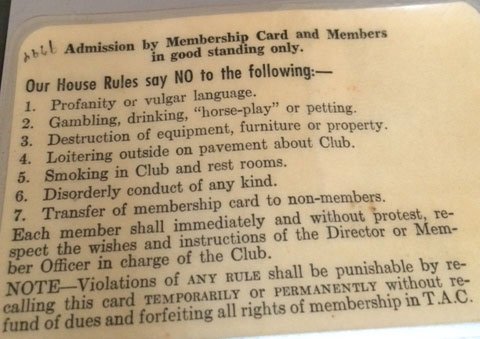 I also received a letter from Donna (Fry) Shellenberger of York. Donna wrote that she had not previously heard us talk about the Teen Age Club on South George Street, which she recalled being across from the post office and next to Sol Kessler’s Record Shop.

“I started going there in 1954 and was there til they closed,” Donna wrote. “In 1958, I think that’s the date, Mr. Luther Yoe and his wife Shirley ran this club for teenagers. We had weightlifting, ping pong, darts and of course dancing. It cost 10 cents everytime you went, and well worth it. I walked form Maple St. down to the club and had no problem then. I went almost every night… not open on Sundays.”

She continued, “We danced to a jukebox. Mr. Yoe let us get records next door at Sol’s. We paid 25 cents a record. I… met so many wonderful people from all walks of life. Some came from the east end/west end besides the city. I have a ring from the club; you earned points for helping out. We jitterbugged and slow danced all night till 9. Our mother would help out by working at the door to check everybody out. It keep us off the streets and we all had a great time. I’m sure some other people would like to remember this. What great memories.”

Thank you for sharing these Teen Age Club memories! I wish I could have spent my teenage years there!