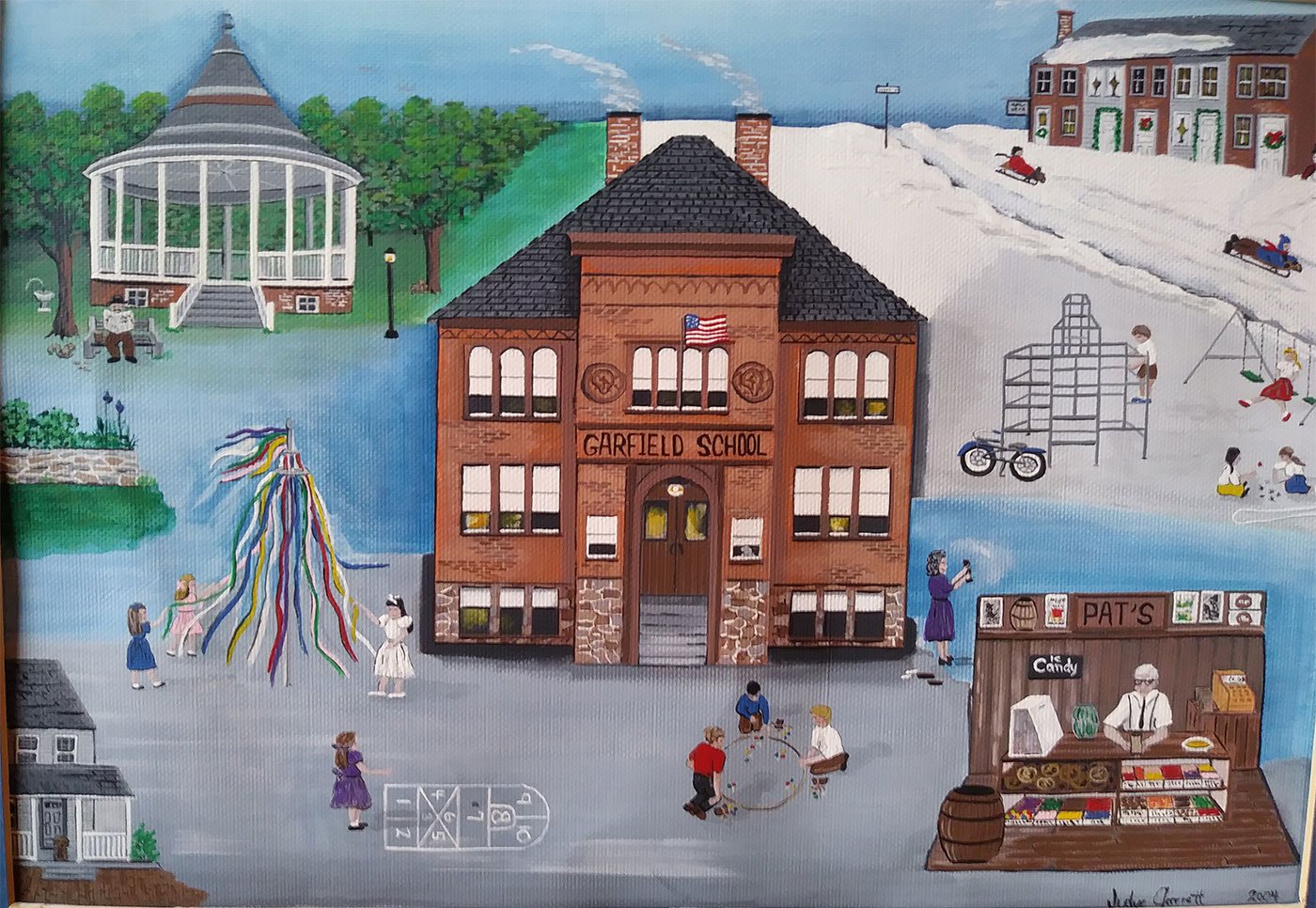 Reader Judye Garrett created this painting depicting some of her favorite things about growing up in the neighborhood around Garfield School.
Posted by Joan ConcilioJanuary 29, 2019 Local memories, York City/SuburbanNo Comments

Two weeks ago, I promised that I had more memories to share about the former Garfield School in York, and my apologies to those of you who were looking for those last Sunday. The amazing coincidence of finding that I knew not one but two fans of Whirley Plastics got to me and I just had to jump in with some great Moo-Cow Creamer photos.

But this week, as promised, I have some more notes to share on Garfield following the recent memories shared from reader Curvin E.

Of note, Curvin had described an unfortunate incident in which he hit a softball through the window of a home on North Street when playing on the school grounds – landing in a baby’s crib which, thankfully, did not have a baby in it at the time. He mentioned that there had been a newspaper item about it the next day, and imagine how surprised I was when reader Peg Horn shared with me a copy of that June 9, 1960, photo and caption, which I was able to pass on to Curvin!

In more cheeful news about Garfield School, I also heard from reader Judye Garrett, who wrote, “I was one of those ‘Garfield Kids’ and lived on Garfield Street! Some of my favorite memories are of attending the school, and living in that neighborhood. We had so much fun at the playground, and ‘roaming’ the neighborhood!”

She continued, “In 2004, my sister Jo requested that I paint something (me being an amateur artist!) of the school. I decided to do a collage of some of our favorite pasttimes.” She was kind enough to share a picture of the painting, which she had copied and gave to friends. “I hope the old ‘Garfield Kids’ enjoy the memories,” she concluded.

I am thrilled to be able to feature Judye’s painting with today’s column. Judye, it’s absolutely amazing – thank you so much for sharing!

With some more information on Garfield, I also heard from longtime family friend Connie Morningstar, who wrote, “Garfield school was located in York City’s northwest sector along North Penn Street, between Smyser and West North Street or it was south of Farquhar Park near the foot of Garfield Street. The school was built in 1896 as an elementary school from 1905 through 1958. The school was razed between 1958 and 1962. The school contained 12 school rooms. B.F. Willis was the architect and James L. Menough was the builder. Garden apartments were built on the site. The apartments were low-rent. The one-acre site accomdated 16 apartments, four on West North Street and four on Smyser Street and eight in a small court area lying off Smyser Street.”

Finally for today on this topic – and, yes, I have even MORE memories to share soon, though now I’m smart enough not to promise a specific date! – I had a note from longtime reader and commenter Tom Keasey and then a related email from another reader.

Tom wrote, “I feel sure the school was named after of the late President James A. Garfield, who was assassinated in 1881. I don’t know when the building opened, but it closed in 1958 or 1959 and gave way to the original Arthur W. Ferguson Elementary. During the winter of 1958 as Ferguson was being built, the area was hit by a major blizzard; my dad was overseeing the installation of the new school’s HVAC system. Living close to the work site, he was able to borrow a generator and ran wiring to run a neighbor’s furnace because the family had just brought baby home from the hospital. For a period of time in the 1950s the Garfield building hosted classes for children afflicted with Cerebral Palsy, operated by the York County Easter Seal Society. Both my sister and I attended these classes at Garfield for a period of time, which were taught by a Mrs. Dietz and Mrs. Margaret E. Moul, who would go on to found the Margaret E. Moul Home some thirty-plus years later.”

Tom, I had no idea about that early start to Mrs. Moul’s work – I am so glad you shared! I also heard from reader Gloria Aughenbaugh, who replied after reading Curvin’s note a couple of weeks ago that Garfield had a ramp for children with physical disabilities.

Gloria wrote, “My daughter attended Garfield for kindergarten and Grade 1 ca. 1952. The children in a nearby room who were disabled were being taught by Mrs. Margaret Moul, who later founded the home for these children. She was a wonderful human being.”

So now I’ve learned something completely new to me about Mrs. Moul’s work, and I’m so grateful!