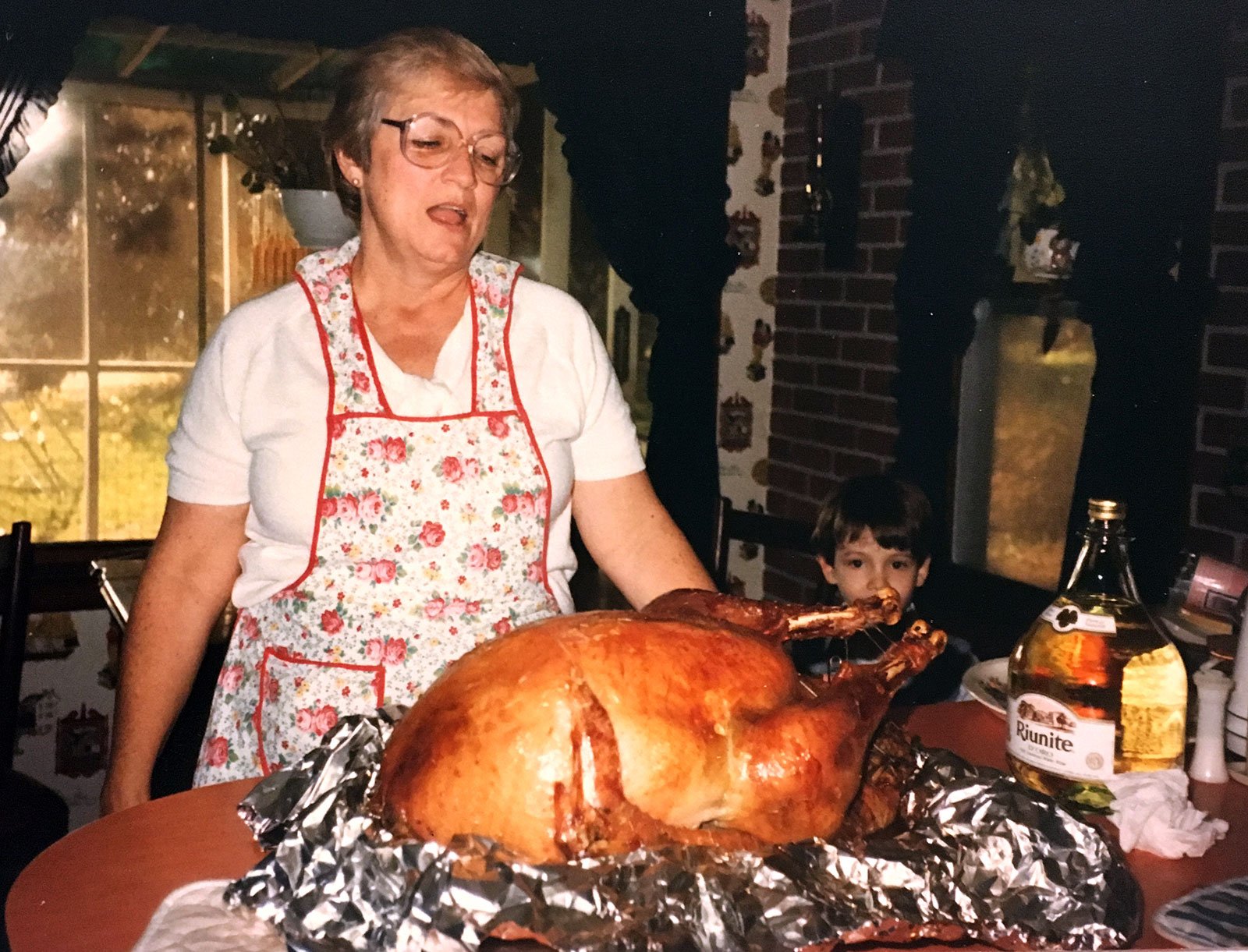 Joan H. Concilio (Only in York County author Joan S. Concilio's mother) with a remarkably large turkey raised by her husband, Lou, on their Dover Township farmette in November 1986. One of younger Joan's nephews, a bottle of truly classy Thanksgiving wine and a Tupperware salt shaker used by the family for decades are looking on.
Posted by Joan ConcilioApril 21, 2019April 21, 2019 Local memoriesNo Comments

Meet the original Joan Concilio: A celebration of my mom

I’ve mentioned my mom countless times in past columns. Every time we talked about the Market and Penn Farmers’ Market, for instance, I’d note that she ran two businesses there – Mom’s Kitchen and Joan’s Candy Corner – for more than a decade.

Most years around my birthday, I’d relate how, instead of a cake, I always asked her to make me a pie crust. No filling, just rolled-out crust.

I shared how our family always went to the former World’s Greatest Yard Sale together, and how Mom, Dad and I ate a lot of Sunday dinners after church at either Rutter’s or Alexander’s.

My mom celebrated her 84th birthday March 25, two days after I got married. Less than a month later, she passed away. We said goodbye to her April 17 at Memorial Hospital.

Her name, too, was Joan Concilio. (She was Joan H., and I’m Joan S.) She lived in York County from 1974 until her death – 45 years, more than half her life. While not a lifelong Yorker, this was her home.

She and my father bought a home here – on Blackberry Road in Dover Township – in 1974. They’d ended up in York County while on one of many day trips from Pitman, N.J., where they were living, and decided it looked like a great place to live.

They adopted me in 1982, and raised me on our five-acre farmette surrounded by dogs, goats, chickens and more. We went to church at Mount Royal United Methodist every Sunday, and Mom took me with her to help at the regular hogmaw and oyster suppers.

She volunteered at horse shows run by our neighbors, helping in the kitchen. That was on top of the many jobs she worked – not just at Market, but also as a secretary, bookkeeper and bank teller, nursing home aide, deli clerk and much more.

Her obituary talked about all those things.

But it didn’t tell you that she took me to get Hills hot dogs almost every time we’d shop.

Or how she raised me single-handedly after my dad passed away in 1993.

Or that, for the past eight years or so, we had a great tradition of going to Mother’s Day tea at the Red Brick Bakery in Red Lion, usually with my sister and my daughter.

There aren’t enough words to describe how much I loved – and will always love – my mom.

I’ve written about York’s past for more than 12 years now. I’ve said goodbye to numerous readers who’ve passed away, and it’s never easy. In most cases, though, I look back at the lives of those who wrote to me and thought, “I did a good job helping to preserve their memories about York.”

With Mom, I wonder if I did enough.

I have hundreds of pictures of her, but none of most of those York County things I mentioned – no World’s Greatest Yard Sale, nothing of us at the fair, none of those family dinners at our favorite restaurants.

We talked all the time – in fact, we never lived apart; growing up, of course I lived with her, and then, when I bought my first house, she moved in with me. That made for 36 years of daily conversations and memories, but those were casual; I almost never wrote those stories down.

I wish I had known then that those times were just as important, just as “special,” as the milestone birthdays and family reunions that I made sure to document.

My goal moving forward – and one I hope you’ll join me in – is to preserve not just the big moments, but all the little day-to-day things worth enjoying and remembering too.

The “original Joan” would love that.