Memories of The White Swan west of York

Diane Folkenroth, while thinking back to the Pine Tree Inn west of York, wrote in with some more memories from that area.

“Other sites in the west end: White Swan; Orange Top; at the railroad tracks – Farm Bureau; Gross’s farm – sold produce; Donahue’s garage sold RC cola and penny candy; Hangin’ at the bowling lanes in the hot summer; Ginter’s restaurant – the best and greasiest burgers; then onward to the Homestead restaurant, then the Jolly Cow, and later the Friendly’s restaurant. And we had a Joe Bury’s; Beck’s ice cream parlor; the best Green’s Dairy bar and Latucca’s and “Gem’s” variety store near the high school!!”

Those are all great memories, and I’m sure we’ll talk even more about them in the future. Today, though, I want to focus on one place Diane highlighted: The White Swan, which was at 4155 W. Market St., West Manchester Township, between the Route 616 turnoff and the Route 116 turnoff. 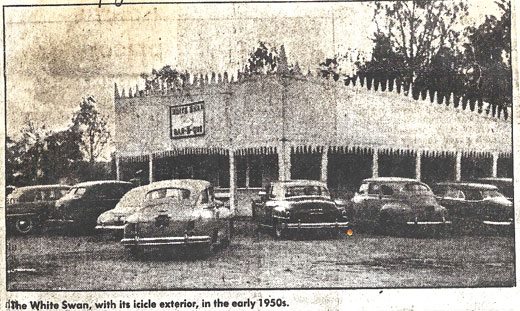 Bill Landes had suggested that one to me earlier, as did Jim Knaub and Keith Stouch. Another reader, who didn’t give their name, wrote: “A favorite of ours from the 1950s was The White Swan drive-in restaurant on West Market St. The building was recently torn down completely, but used to have a large white stone barbecuing pit and the best ham you could eat.”

And an incredibly helpful and detailed memory came courtesy of Wayne J. Gross.

Wayne sent me some information from old editions of the York Sunday News relative to the White Swan Drive-In Restaurant, which, he describes, “was famous for their pork BBQ’s and ‘Lime Rickeys’ among other favorites, served to your car window by pretty attendants.”

Here’s the coolest part. Wayne says, “This building was built in 1927 by my Father, C. M. Gross and his Brother, Chas. C. Gross (known then as GROSS BROTHERS, CONTRACTORS) from Dover, Pa. After this one, another White Swan building was built in New Cumberland for Mr. Henry, by Gross Bros., Contractors.”

Wayne was able to add more info, too; the location later became Clair’s Drive-In (under the ownership of Clair Markey) and was at some point the West York Restaurant, but it is now vacant, all buildings having been removed.

While looking for even more info on the White Swan, I found a 2007 York Town Square post by Jim McClure that described it, along with its east-end partner Melvin’s. In Jim’s post, he quotes a fun column by longtime YDR columnist Jim Hubley, now deceased.

From Mr. Hubley’s September 1996 column: “The White Swan was York’s initial venture into a new concept of dispensing short-order food to patrons unwilling to go inside for a quick snack, drink or what-have-you. The drive-in idea began in California, an ideal background because of its year-round pleasant weather. The California beginning consisted of a small building where food could be prepared quickly. There was very little room for customers to sit, but there was a huge parking area surrounding the building. Motorists could drive onto the parking lot, sit in their cars and be waited on by attractive young ladies. Some California places put their waitresses on roller skates in order to expedite service. They served the food on metal trays which attached to car doors when the windows were lowered. Millard Henry, a pioneer manufacturer of soft ice cream, also known as custard, had the White Swan constructed in 1927. It was located at 4155 W. Market St., the old Lincoln Highway and now part of heavily congested Route 30. Yorkers, the comparatively few who had automobiles, began patronizing the White Swan. They liked the idea of not getting out of their vehicles to have a bite to eat or a cooling drink while enjoying the closeness and comfort of their dates. The soft custard menu soon expanded. The White Swan constructed a barbecue pit along the side of its structure and served up delightful ham, beef, chicken and other concoctions. It soon became the ‘in’ place for fun-seekers and hungry mobile Yorkers. When the New Deal was introduced to fight the Depression, many ideas, some good, some weird, were launched to help produce more jobs for men. Places like the White Swan were targeted because of their use of pretty females to do the serving. This was largely responsible for the success of such places, but some New Dealers hinted drive-ins should hire men instead of pretty girls. It was a ridiculous idea, except by some quirk I landed a job as a male car hop, a rare American profession. I worked only 10 weeks, just long enough to earn money for a trip to Chicago. The idea of male car hops didn’t last much longer. Before long, attractive young girls again took over, and drive-ins such as the White Swan increased and thrived. Eventually, York had more than its share, with Melvin’s becoming as popular at a spot east of York, as the White Swan was to the west. The popularity of drive-in restaurants peaked during the 1950s. By the next decade, many had fallen to real estate development or new fads. Melvin’s was swooped up; the White Swan changed hands and expanded to a regular restaurant without car hops.”

Well, how about that? Male car hops, the start of soft ice cream and more!