Quite a while ago, Ben Lightner suggested I should blog about “Old Mack.”

Who was Mack? Well, in the words of late YDR columnist Jim Hubley, “Mack was a horse, a fire horse in the days before fire-fighting vehicles were mechanized.”

Hubley continues, “All York loved Mack. When he was retired his popularity soared and he entered show business, thanks to an unique plan of his fellow humans at the Rescue Fire Company where Mack toiled. They were aware Mack would someday pass on. They didn’t want him forgotten. They planned a show, featuring Mack, and designated the proceeds to be placed in a fund to bury and honor Mack. The show was started at Highland Park in 1907 before a sellout crowd of Mack’s admirers.”

According to Greg Halpin, York’s assistant fire chief, “Mack was originally buried in Baumgardners Woods, or Bummy’s Woods as we local kids called it, off of Rathton Road. When that land was turned over to Penn State York for expansion plans, Mack was exhumed and reburied on the grounds of the Fire Museum. One of the papers ran an article about Mack answering another fire call, as his remains were in the car of volunteer fireman Art Rider who drove to a fire in the City.”

Interestingly, while I’d been thinking for a while I should write about Mack, it was Wade Kehr who brought him up again.

You might remember that Wade had sent some clippings in the last week or two referencing the Orpheum, the Valencia and more. Well, he sent another clipping, too. This one, part of a series called “The York County That Was,” by Joe Hicks of the Sunday News, featured a photo and story about the area’s fire horses and the men who worked with them. 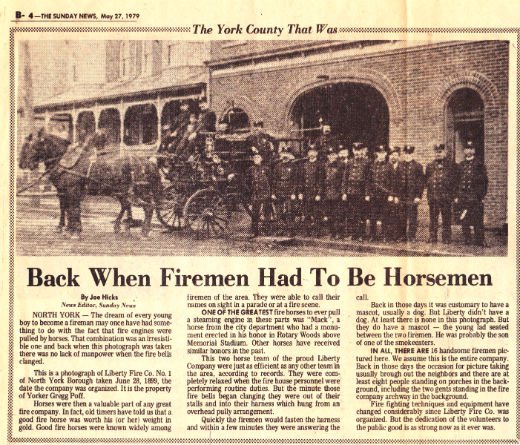 In case you can’t make out the details, the photo is of Liberty Fire Company No. 1 of North York, taken June 28, 1899, the date the company was organized. In the story, it goes on to talk about firemen and their horses and says, “One of the greatest fire horses to ever pull a steaming engine in these parts was ‘Mack,’ a horse from the city department who had a monument erected in his honor in Rotary Woods above Memorial Stadium.” (As of this column’s date, May 27, 1979, of course that was still Mack’s resting place!)

So here’s the interesting Only in York County part. Bill Landes had contacted me a while back, saying I should look into some old columns from the former Lancaster-York Sunday News, because he thought I’d like them. Guess what? The author was Joseph Hicks, and I assume I’ve found the series in question!

Man, I really do love it when everything comes together.

1 comment on “Memories of Old Mack the fire horse”