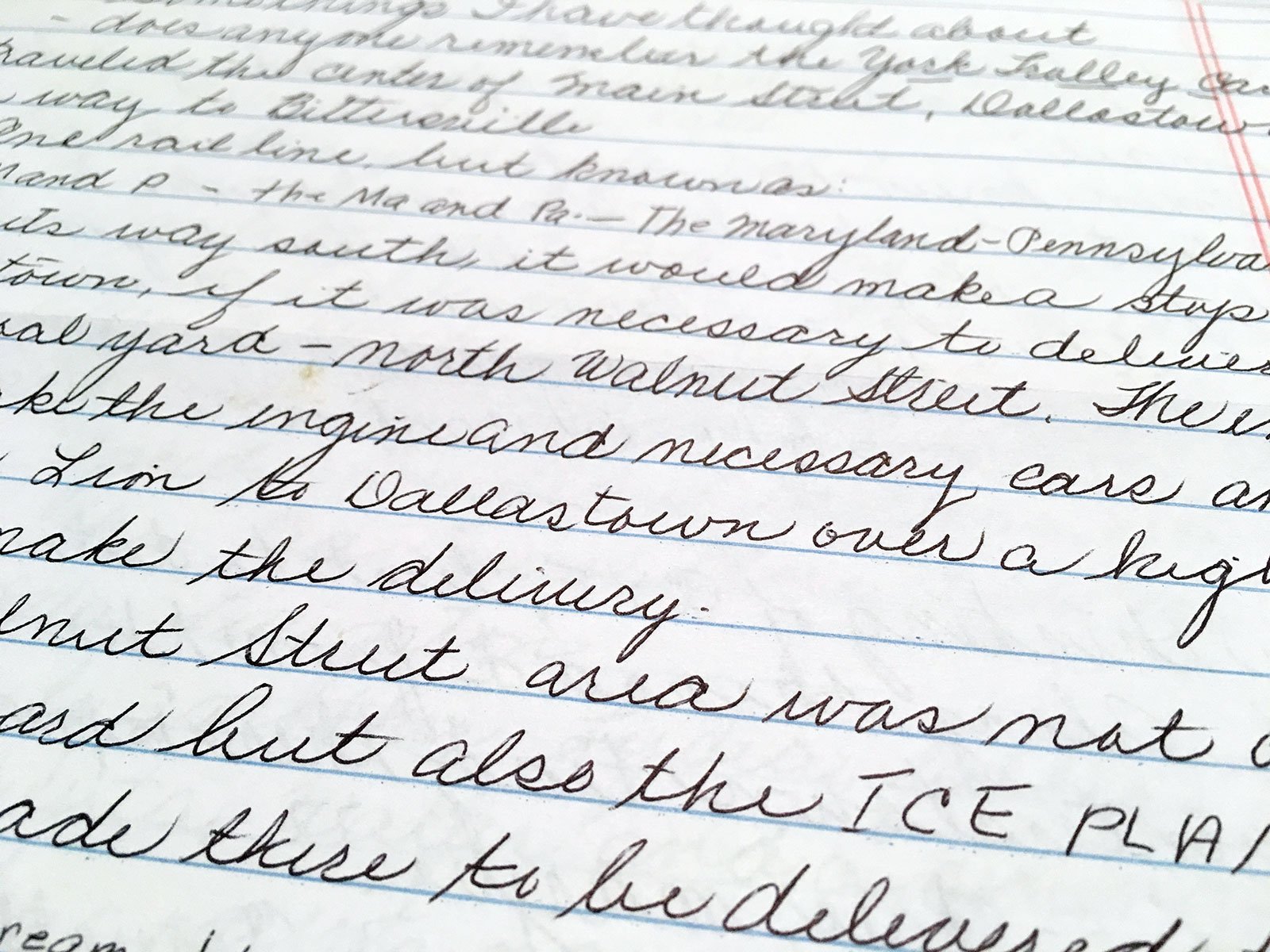 Betty J. Massa of West Manchester Township wrote to share her memories of growing up in the area outside of Dallastown. She passed away just over a month after her recent letters, one of which is seen here, were published.
Posted by Joan ConcilioOctober 22, 2018October 23, 2018 Ask Joan, Local memoriesNo Comments

Those close to me know that I’m, to put it mildly, a total sap. I cry at books, at movies, at those gut-wrenching commercials with the sad dogs at the pound, at the flower arrangement that’s left at the store because it’s a little too pathetic for anyone to want to put it on their table… you name it, I can probably cry about it.

Beyond the goofy things, though, I am also immensely sentimental. I’m our family’s keeper of the scrapbooks and the old photos; I’m the person (OK, one of the people) saving notes from birthday cards; I still sleep with the blanket I got for Christmas in the third grade.

More or less, all of this is how I came to start writing Only in York County and Ask Joan: I wanted to talk about the things I remembered from growing up here, and see who else remembered them too. It’s grown from there, but the idea remains that I want to feel connected to good memories, and I want to help other people feel that too.

So today’s Ask Joan is a little different. There aren’t really any questions, only some stories from the past few weeks that have made me glad for the connections that come from shared memories.

But there is a challenge: Reminiscing is amazing when it’s shared. If you’ve been wondering what happened to that friend from grade school, or your first boss, or your bowling league teammate – try to reach out. See if you can find them, or a family member, and just say hello. It may not be life-changing, but you may make that person’s day as much as these stories made mine.

I’d been hearing from reader Betty J. Massa regularly since at least 2014 or 2015. She sent me photos of The Washington House in the Hellam/Wrightsville area back in January 2015, and more recently, in September, I wrote two columns based on what she titled “A result of an afternoon of remembering” – parts one and two.

Betty had written me those two recent letters, signed “bjm” – a holdover from her days working as a secretary and noting her initials on professional correspondence. I mentioned when I shared them that, in addition to being a longtime reader, Betty was the grandmother of my longtime friend Chris Massa, now working as a professional composer in Pittsburgh, where he lives with his wife and son. His parents, John and Linda Massa – Betty’s son and daughter-in-law – still live in the Dover area, within walking distance of my house.

So it wasn’t a big surprise to receive a Facebook message from Linda the other week, though the contents were sad. Linda was writing to let me know that Betty had passed away peacefully at her home at Normandie Ridge in West Manchester Township on Wednesday, Oct. 17. She was 93. “Your use of her memories in your newspaper column was a highlight for her. She became kind of a celebrity at Normandie Ridge,” Linda wrote.

I was glad to hear that Betty had enjoyed seeing her memories shared, and I certainly hope that her friends at Normandie Ridge took the time to reminisce together with her. When I was last at Normandie, to visit my former English teacher Sheila Webb earlier this year, I wish I had known Betty was residing there. It would have been nice to chat together, and I’m sorry that I missed the opportunity.

(In keeping with the challenge at the start of this column, I do want to add: I have not been able to reach Mrs. Webb recently by mail or phone. To those reading from Normandie Ridge, if you know Sheila, please tell her I have been trying to get in touch.)

In another recent column, I was thrilled to share reader Robert Goldsmith’s memories of growing up in York. Robert is now living in Las Vegas, and said he wrote because he was feeling nostalgic about York.

So imagine how thrilled I was to receive this follow-up letter from him just afterward! “What a treat to find that my email to you about York was in the local newspaper,” Robert wrote. “I heard in the most wonderful way. I received a phone call out of the blue from a childhood friend of mine. (I think the last time I spoke with him my voice hadn’t changed yet.) He lives in Lancaster and we’re planning on getting together. He was thrilled that after more than 50 years I still remember the names of his parents and grandfather. I also got calls from two other high school friends… What a nice thing you have done. I’ll have to dredge up more memories for you.”

I told Robert that, first of all, I’m always glad for any memories he sends my way. But I was also excited to write to him and tell him that I, too, had heard from some of the friends he mentioned.

Not an hour after receiving Robert’s email, I received one from Bill Hoffman, thanking me for printing Robert’s recollections.

Bill wrote, “He and I were neighbors in Randolph Park and I often wondered what had happened to him… I found his address and phone number on 411.com and called him yesterday. He was just as delighted to hear from me as I was to find him. So after 50 years we are back in touch with each other!”

The third person to write to me was Lynne Leopold-Sharp, who described herself as “the Penn band member and YS school board member he referenced in his letter!”

Lynne wrote, “I don’t have any memories of growing up in York (arriving here at age 38) but I’ve wondered where Robert was for many years now! The last time I saw him was in the early 1990s when he and his mother were in town briefly and I met them for a cup of coffee.” She then let me know she’d found Robert’s contact information and was going to be in touch.

First of all, getting two people connected to another that way is very cool. And, selfishly, I thought it was even cooler that they all wrote to me so I could enjoy it with them!

I did have one other follow-up to share from Bill, who had written to me himself earlier this year, sharing details about Jacks Department Store. Bill wanted to let me know that Jo Newman, the wife of Jacks’ owner, Nat, died within the past couple of weeks, and he was able to attend the funeral. “Other than her three sons, I didn’t know anyone there, but my family and hers were friends for three generations,” he noted. I thought other readers who recalled the Newmans would also want to know about this.

As a final update today, you may remember that just a couple of weeks ago, I shared a note from reader Rosa Bergen, who was looking to get in touch with another reader who had an old family photo depicting Rosa’s family.

That photo was shared by reader Donna Kober, whose mother-in-law originally purchased a picture at a yard sale that had the photo of what turned out to be Rosa’s family behind it. Donna wrote to tell me how thrilled her mother-in-law was about us finding Rosa and her family, and I was able to put Donna and Rosa in touch. The two are going to try to connect, and I can’t wait to hear more once they do!

And on that note, I’ll repeat my challenge: Please reach out to those people you recall fondly, like Robert’s friends did, or to try to find those with whom you’d like to connect, like Rosa and Donna did. I’d love to hear your stories – and your shared memories – when you do.