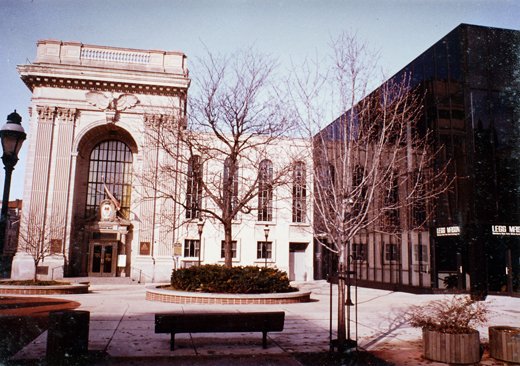 Charles V. Goodwin of Windsor submitted several photos of York's downtown area through the years, including this one, in which the former Citizens Bank building on Continental Square can be seen at left. Read Marc Shutz of Dallastown, who grew up in York, recalled that bank as well as W.T. Grant and some other businesses on the square.
Posted by Joan ConcilioMarch 6, 2019 Local memories, York City/SuburbanNo Comments

Memories of growing up on East Cottage Place

Today, I’d like to share a letter I received almost a year ago from Marc L. Shutz, now of Dallastown.

Marc wrote that he wanted to “share some things about how York used to be when I was young,” noting that he grew up in the city until 1971, when he moved to North York. He and his wife have lived in Dallastown since 1983.

Marc began, “Myself, my mom and my sister moved to the 100 block of East Cottage Place in early 1960. Back then, Associated Architects was located on South George Street between Cottage Place and Jackson Street. My dentist’s office was at the corner of South George Street and Cottage Place. There was a Giant store where the Junior Achievement building is now. Across the alley were two buildings of a moving and storage company. Carl’s Newsstand was next to that; Stetler Dodge was across the street. I bought a few cars from them.”

He continued, “There was a pizza shop on the corner. Adams Jeweler was across the street. Mon’s Cafe was next to that. In the middle of the block, where the laundry is now, was Sechrist & Something butcher shop.” (Note from Joan: I’d be curious what went with Sechrist’s; I’m familiar with Sechrist Brothers meats, as they had a stand with my family at Market and Penn Farmers’ Market for years, but not sure if this was related.)

“On Princess Street,” he continued, “was the Princess Pat Cafe (I played there), the G Bar and Frank’s. On the corner was The Bon-Ton Furniture Store. Across from that was Concino’s Shoe Service. A restaurant was next to that. Pat Paterson’s bar was across the street (a McDonald’s in there now). THen there was Pep Boys. Across the alley was the state store. Next to that was Sol Kessler’s Music Store. Rit, the Record King, really got me into all kinds of music at that store. There was also a hobby shop and a few appliance stores in that block.”

I’ll just add here that we have talked extensively about Rit or Ritt the Record King at Sol Kessler’s in past columns. He was a legend! (I understand his last name was Ritter, hence the nickname, but have not yet heard his first name.) If you’d like to read more, check out yorkblog.com/onlyyork/sol-kessler.

Anyway, back to Marc’s letter, he continues, “In the next block was Reineberg’s Shoe Store. Where the Fulton Bank building is now, there used to be a movie theater there. When the square was still round, Peoples Drug Store was there. There was also a bank, and I think a W.T. Grant store. Then there was a Newswanger’s shoe store. There was Bears, Weist’s, Jack’s and The Bon-Ton. Across the street was a jewelry store. On the second floor was 1350 AM Radio. Saturday mornings from 9 till noon, we heard the real music on that station. Julius Music was located a few doors form the railroad tracks; I bought two sets of drums at that store.”

“Back to the square!” Marc continued. “There was a restaurant, and a parking lot next to that. THen there was the Town Tavern. I played there a lot of times. Next to that was a hotel; it is now the courthouse. Heading further north, there was a pool hall; I had been in there several times. Then there was the Pennsylvania Railroad train station. At the next track was the Western Maryland Freight Depot.”

He concluded, “All this came to an end when we had the hurricane come through here in 1972. The Codorus Creek overflowed, causing major damage.”

Marc is certainly right about the changes brought about by Hurriance Agnes in ’72. YDR editor Jim McClure has written about that a lot over the years on his York Town Square blog; you can check out yorkblog.com/yorktownsquare/agnes for more.

Marc, I was very glad to hear your memories from downtown York. I’m interested to hear what others remember as well!