Today’s letter comes to me from Jackie Tredway Korte of Red Lion, who you might remember sent me a clipping of some quotes from the 1950s.

In her accompanying letter, Jackie talked about memories trigged by this post, in which reader Mary Kurman shared a photo of her family’s grocery store in the town after a huge snowstorm.

Here’s Mary’s photo, which was taken in February of 1958.

And here’s a photo shared with me by Jackie, also taken in 1958. 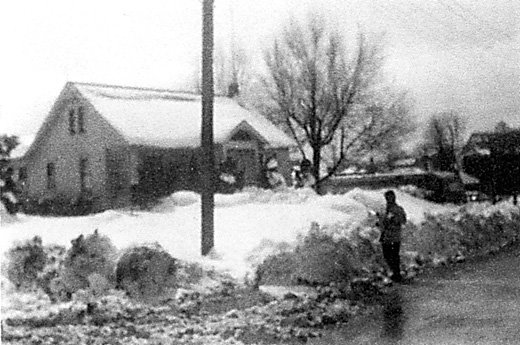 Jackie writes, “I grew up in Stewartstown. The picture … of the snowstorm, I remember well. Norris’s Grocery Store was on the square next door to Malles’ 5&10 store.”

The picture, she says, is “me in front of the house on Mill St. where I grew up. My mom and I did a lot of shoveling that day.”

And, she concludes, “Stewartstown was a very nice town to grow up in. Some of my friends still live there.” As do some of mine, Jackie, and I know they’d agree!