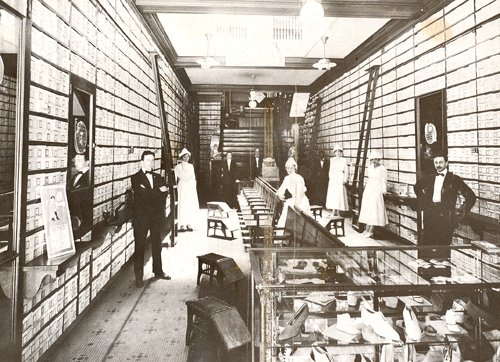 Today’s letter comes from Joyce Rode, who shared these postcards advertising sales at Reineberg’s Shoe Store. The cards were sent in 1980 and 1981, but the photos are from 1925.

On the back, the postcards detail sales in honor of the store’s 103rd and 104th anniversaries respectively, and the one showing the store’s interior points out how different it was than the store of the present day. 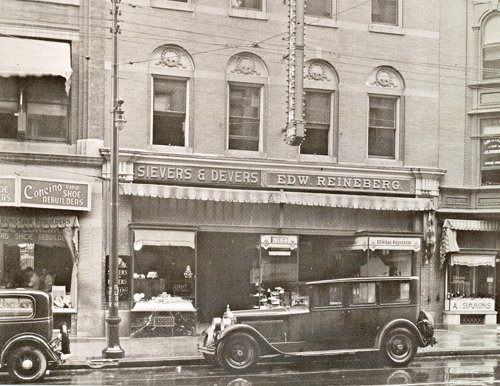 Joyce writes, “I found these picture postcards among our treasures recently. My husband I never threw anything away. (Big mistake.) They were sent to him for sales at Reineberg’s in 1980 and 1981, but the pictures go back to 1925. I also noticed Sievers & Devers jewelry store, pictured here, which brought back memories. We bought our wedding rings there 60 years ago (1952). It was on S. George St.”

She continues, “Our engagement was announced at my Jr.-Sr. Prom at Manchester High School on May 29, 1952. They dedicated a song to us – “Too Young” – made famous by Nat King Cole. Maybe we were too young but we didn’t know it. We were only 17. I graduated June 2, 1952, started working an office job and my hubby-to-be joined the Navy in August. When he came home from boot camp leave we got married. It was November 8, 1952 (my sister’s 19th birthday). When he returned to his base, we didn’t know when we would see each other again. It was nice, because he was stationed in Maryland for the next 3 years.”

Joyce adds, “We often laughed because he joined the Navy to see the world and spent 3 yrs. in Maryland. The last year was in Africa and Florida.”

She concludes, “When he died in 1990 at age 55, we were married for 37 years; had 4 children and 4 grandchildren. I still wear my rings from Sievers & Devers because I can’t get them off any longer, and I don’t have the heart to have them cut off.”

Joyce, I loved reading your story – and hearing about your wedding rings! (And don’t worry about never throwing anything out – that’s what keeps this column in business!)