Today’s letter came in response to this August post on former businesses gleaned from ads in a 1947 cookbook put out by Christ Lutheran Church of York.

Barbara Brown writes, “I’m a 1947 war baby and went to Christ Lutheran Church. Can’t recall the cookbook, but I am Barbara Ann (Schiding) Senft Brown, granddaughter of Mary and Big John Schiding. And as a kid, I never realized their store had a name. Just that it was where Na-Na and Pa-Pa lived upstairs. We lived halfway up the block at 232 E. Cottage (Place) Ave. Enclosed a pic of much younger me and the Easter Bunnies. … Thanks for the memories!”

Here’s that photo of Barbara: 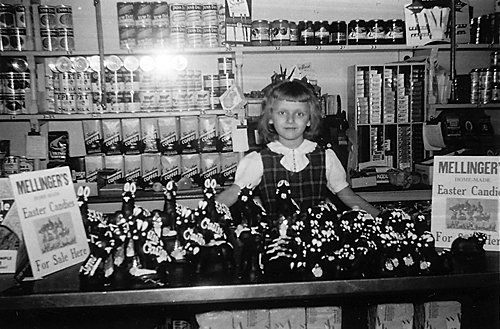 Barbara, thanks for sharing – that’s an awesome picture and I’m so glad to hear a bit more about Schiding’s!