Posted by Joan ConcilioJuly 8, 2011 It used to be..., Local memories, York City/SuburbanNo Comments 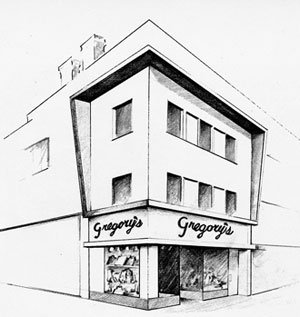 We’ve talked quite a few times about Gregory’s Menswear that used to be on North George Street in York, and today’s letter from reader Clarence Bosserman Jr. of York adds even more detail in a particular area regarding Gregory’s – its employees!

Mr. Bosserman’s letter starts, about Gregory’s, “Not only did they have good value clothing, but the staff were always friendly and courteous. Perhaps your readers may reembmer the following – Marshall Gregory, Sam Gregory, Tom Gregory, Marshall Gregory Jr. In the office were Jackie Markey Husson and Miriam Biesecker. Tailors were Red Conway and Bob Heiner. On the floor they had Mel Bond, Teet Crimmons, Ed Eberly, Ernie Gladfelter, Dale and Floyd Flinchbaugh, Paul Kitzmiller, Bob Lentz, Danny Faulk, Robert Holmes, Julia Strickler and John Shadle. I hope I didn’t leave anyone out!”

I don’t have any idea how Clarence remembered that – his letter didn’t say if maybe he was also a former employee? – but WOW. That’s great!