Mail call: Memories of a former window-trimmer for local stores

Today’s letter full of reader memories comes from Gussie L. Ritter of York. Lots of businesses here I hadn’t heard much on before, and I really appreciate it, Gussie! 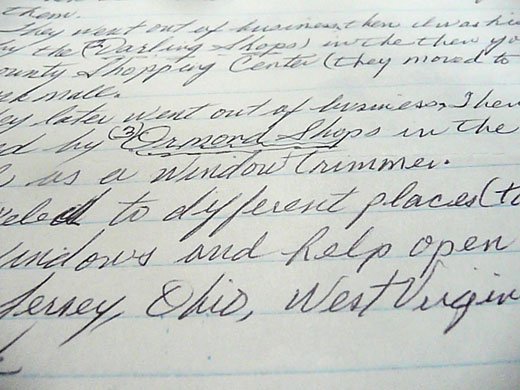 She writes, “Here are some stores I remember. Herbert’s Dept. Store on East Market St. I got my first job there after graduating from William Penn (1954). I started out as a stock girl at 50 cents an hour. Then I became a window decorator for them. They went out of business, then I was hired by the Darling Shops in the then York County Shopping Center (they moved to York Mall).”

By the way – we’ll be talking more about the former York County Shopping Center this coming week, so please check back for more on that!

Once Darling Shops went out of business, Gussie said, “Then I was hired by Ormond Shops in the York Mall as a window trimmer. I traveled to different places (towns) to trim their windows and help open new stores in New Jersey, Ohio, West Virginia, Maryland and New York.”

Regarding her own shopping experiences, Gussie writes, “I still have a lamp I purchased from G.C. Murphy on E. Market St. (it still works).”

She continues, “I have an elephant from W.T. Grant’s and a charge card and wall pictures, and a necklace from Woolworth downtown that I purchased when I was 14 years old. I still wear it – pink star shape with a ceramic rose in the center. Also a small cedar chest from Shive’s Furniture Store on West Market St. (one was given to the graduates).”

This brought back an unusual memory for me – I received a small cedar chest when I graduated from high school as well, some years later, and while I still have it, I don’t know who it came from! Does anyone have any ideas who’s still doing this locally? I’d forgotten all about where the chest came from until I saw Gussie’s note.

She concluded, “I’m retired now. After working in the stores, I got a job at Standard Register Printing Plant. I worked there for 17 years.”

Gussie, I appreciate all of your memories, especially for jogging my own thoughts about that cedar chest!