Posted by Joan ConcilioJune 18, 2011 It used to be..., Local memories, York City/Suburban

Mail call: A downtown map and thoughts on Green Stamps from the Staub family

Today’s letter is one of the most detailed I’ve ever received. It’s from Richard Staub of the Dallastown area, who got together with his wife, Cheryl, and his sister Jean to create both a map and a description of downtown York in the 1950s and ’60s.

His note stirred up some ideas, as it referenced some things I and other bloggers have talked about in the past, so be on the lookout for my notes with links to further reading!

“In 1968, I worked at A.M.F. which is now Harley-Davidson, I worked on the bomb line building bombs for Vietnam War and received Green Stamps for making quotas. We would redeem them for all kinds of things. It was nothing to get enough stamps to fill numerous books at a time.”

Note from Joan: I loved, loved, loved Green Stamps. The YDR did an installment of its “Remember” series on them; you can read that here. And my husband wrote about them recently on his blog, in conjunction with their cousin, Top Value Stamps.

Anyway, Richard continues, “Bear’s also had a cafeteria and bake shop. They made the best sticky buns in York County at the time. The cafeteria and bake shop were in the basement. Jack’s Dept. Store bought out Beck’s Shoe Store in 1960 or 1961. When I was in my junior and senior year at York Catholic in summer I worked for R.S. Noonan as a laborer making $2.10 an hour; we worked in the basement of Beck’s Shoes, putting a walkway between Beck’s and Jack’s. The wall was stone on Beck’s side with 4 feet of clay dirt in the middle and cement block on Jack’s side. This was done by hand.”

He continues, “Bon-Ton had a tea room on the balcony and Apple Brown Betty. Other eating places and lunch counters in center city were located at Woolworth’s, Grant’s, McCrory’s, Peoples Drug Store. I used to meet my sister at H.G. Bancroft on Duke St. and we would walk down to Les’s Cafeteria on Cherry Lane behind the Central Market. We would have supper and then come around the corner to the Strand or Capitol Theatre for a movie and then walk home to Wayne Ave. in East York.”

“There was Regal Stationary Store at 102 N. George; my dad repaired umbrellas for William Cross, who was the owner. Out in East York, east of New York Wire Cloth, where they made screen for windows and doors, was the York (Holiday) Theatre.”

We talked more about that theater in Tuesday’s post – good timing, Richard!

Richard adds, “At the railroad was L&H 5-and-10-cent store. Behind the theatre was Eastern Market in bottom of building, and at top was a roller skating rink. This burned down in late 50s, early 60s.”

Note from Joan: June Lloyd has more details on the market and the fire on her Universal York blog.

He continues, “Above the L&H store was a bowling alley where they rolled duckpins. East on Market from there on the south side of Market was Miller’s of York Auto Store, Hardware, Paint, Sporting Goods. This store burned out in the fall of the early 1960s. The store had a square counter in the middle of the store with cash registers. Around the counter were all kinds of ammunition for the hunting season, of course between the aerosol cans of paint and ammunition exploding it was pretty unsafe for firefighters. The fire supposedly started when the neon sign that was across the front of the building exploded when they turned it on that evening.”

“There was a state liquor store at the corner of State and Market St. on the northwest corner. U-Need-A-Tailor was east of the state store, on the same side of the street. This turned into a dance spot with live music and then a bar. East of that was Stiner’s Clothing at Ridge and Market on the northwest corner. On the northeast corner was a beer parlor; at the northeast corner of the next alley was York Bank and Trust; next to that was L&H 5-and-10-cent, moved from down the street after the old building was torn down.”

He continues, “On the northwest corner of Sherman and Market was a drug store. Harry Allaman had a Maytag store. Across the street from these stores, on the southeast corner of Market and Sherman, where the (M&T) Bank is now, used to stand a home that was once used by the state police as a substation. Across Sherman St. was Connolly’s Pain Store, where up to about 8 years ago I bought paint for many projects. Way out east, where Route 83 crosses Market St., was an ice cream parlor called Melvin’s. They had frosty malts and pork BBQ. This was a nice walk from home on Wayne Ave.”

Note from Joan: We just talked about Melvin’s last Saturday!

And Richard concludes, “Across the street was Weis Market, they built this building just a couple of years before 83 was built. Speculation was that they knew that 83 was coming through and built there for the money they would make on the demolishing of their building.”

That’s an awesome list that Richard sent, but even cooler were the maps that he, his wife and his sister created. I’m including one here, but I have plans to share the others in future posts. 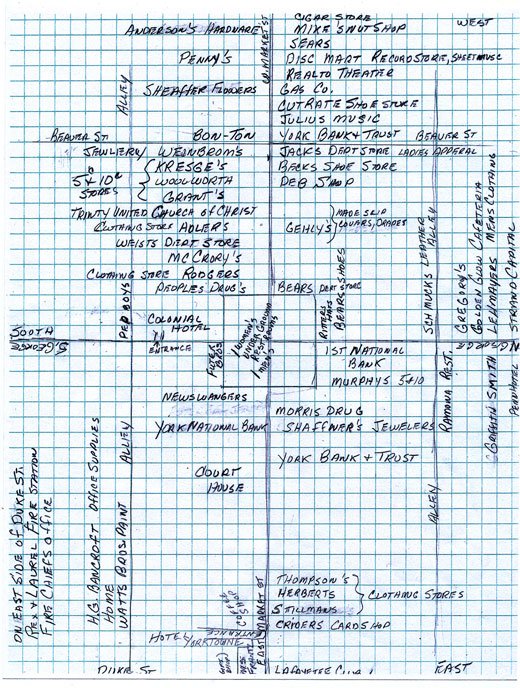 Please check it out and let me know what other memories this sparks for you. And Richard, thank you so much for the time you put into this! How awesome, that was have this digitally now!