1. Memories of Mac’s Hardware continue
2. Recalling Mailman’s and Master’s stores
3. Where veterans’ plaque ended up
4. A few new “Do you remember?” questions

We last talked about Mac’s Hardware, formerly at 713 Arsenal Road in York, in the fall of 2016. Following that, I received a note from Mark Allen, who wrote, “I do not have any deep, insightful memories to share on Mac’s Hardware. My claim is Mac’s Hardware store was my neighbor for the first five years of my life. I lived in the house, which still exists, right beside and directly west of Mac’s Hardware. This was from 1961 until 1966. My parents bought that house to be close to my father’s employment at the ‘new’ Caterpillar plant right up the road. Seemed like a smart move at the time. Arsenal Road was just a regular two-lane road and ran right past my house and the hardware store.”

But, he added, “Soon my parents learned a high speed ‘bypass’ was in the works and decided this would be a real nuisance to have just outside our front door. Plenty of noise with four lanes of fast-moving vehicles rushing past our front yard, etc did not bring comfort to the thoughts of a good-night’s sleep. At that point we were under the impression this would be a bypass. Boy, was everyone fooled in that regard! It turned into the road full of everything! In any case, within months of my starting school in 1966, my family moved to the quiet suburbs of Fayfield.”

He continued, “My short term memories of Mac’s Hardware was it was relatively small but packed with stuff and seemed kind of dark. Maybe it wasn’t dark, but that’s my memory. The best impression I had was we never had to go far to get something in the hardware category. Just walk right over! Light bulb burns out; there’s a new one available on the other side of the driveway. That’s a real luxury that no one can argue with. I thought it was so cool to have a store of any kind right beside my house! I’d like to come up with more stories but there’s very little I remember at that age.”

And, Mark concluded, “When I drive Route 30 through the Sherman Street intersection I always look over at the house I first lived in. The Rutter’s and the Pool store aren’t there in my mind and I can still see Mac’s Hardware. Very few others can make that connection.”

Mark, I’m very grateful to you for sharing those memories – I think they are incredibly insightful and certainly not ones that many people are lucky enough to have!

Longtime reader and commenter Tom Keasey wrote some time ago about a couple of former York County department stores that we have not talked about recently.

He continued, “Most items were marked on a yellow or orange tag that had the prices written on the tag with a black felt pen. I, like many Yorkers, saw Mailman’s as our store of choice for all types of merchandise. Over the years, I purchased many items from this local store, and I was sad to see it close. When this happened, it signaled the end of the Queensgate Shopping Center as we knew it. For many-a-year, smaller stores which derived business from the “draw” of Mailman’s saw their business suffer or just closed their doors. At the lowest point, there was a rumor circulating around that the complex would be razed to make way for a condominium complex; obviously this didn’t happen.”

But, in happy news, he concluded, “With new ownership, over the past decade, the shopping center has re-invented itself and the businesses are thriving.” Tom, I am also glad that Queensgate and some of our other shopping centers have been reinvigorated… I just wish I’d been able to shop at Mailman’s when it was there!

He also added a short note about another department store, Masters’: “My only remembrance of Masters’ was that they sold appliances, and I can remember my parents purchasing a Hotpoint refrigerator at the store in the late 1950s or early 1960s.”

Tom, as always I am so grateful for your memories of York County’s past! 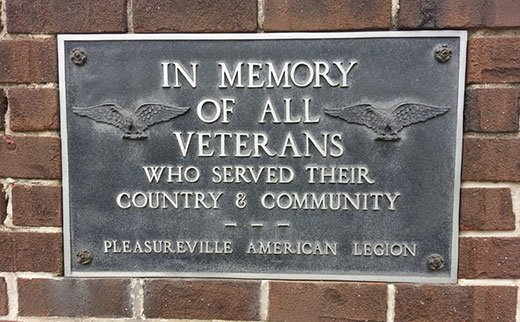 3. Where veterans’ plaque ended up

A number of readers have written to me over the years wondering where veterans’ memorial plaques that they remember from their towns have ended up. John Allen, a longtime reader, was able to give me some details about one along east East Market Street near the Elmwood neighborhood. John noted that the plaque was moved to the front of Victory Fire Company No. 2’s fire station, located behind UPMC Pinnacle Memorial Hospital, in 1972 when the fire company’s new building was constructed.

“It was moved from Market Street and the Boulevard because no one was taking care of it,” he wrote. “It was in a wood box with a glass front, and the wood was falling apart. The firemen got permission in 1972 and moved it to the front of the new station and put it in a brick structure where it would last for a long time. Also, it is lit at nighttime, which it wasn’t at the old location.” John also included photos of its present location, for which I am very grateful!

4. A few new “Do you remember?” questions

To finish today’s column, I want to share a few reader requests for memories or information on particular topics. If you have details to share on any or all, please do!

Jill asks, “Do you know the name of former beer distributor on Randolph Street in Hanover? It is now apartments.”

Also about the Hanover area, Phyllis Podolak asks, “I am writing a biography of my 93-year-old neighbor from Hanover. She recalls going to school at the Mount Pleasant two-room schoolhouse which had eight grades. Anyone recall that school in Hanover?”

And finally for today, Steve McGinnis wrote about a photo I’ve shared several times of the former York County Shopping Center. He was curious about the trucking company pictured in the lower right corner; he writes, “looks like an LTL freight company by the way it’s shaped. Would like to know the name if possible. They are probably out of business now.” (LTL, for those unfamiliar, means a less-than-truckload shipment, in which goods from multiple companies are combined to fill a truck.)

Any info on these topics is certainly appreciated!