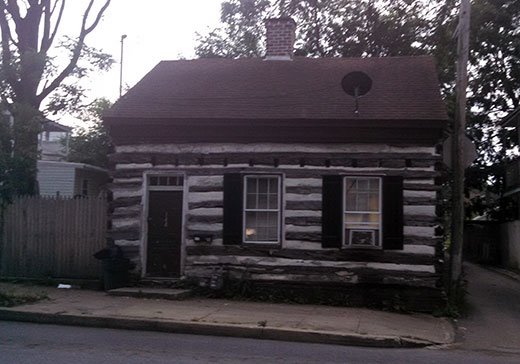 Some time ago, a reader called me and asked if I knew anything about a log house on College Avenue in the city.

After a little bit of a drive, I found the house in question: A home in the 100 block of East College, seen above. This is a private residence (which, as always, means don’t go bothering its occupants!), but what my caller wanted to know was whether I had any information on its past – and how it came to be that in 2015, it’s still standing as-is, and not knocked down for a newer or bigger structure.

I asked my trusted researcher Ann Funk at the Martin Library Information Services Desk what she could find, and she noted that the little house was not a named building or business, nothing that would give a clue to its provenance in her search. In the Polk city directories, it just gives the names of residents, all in the Eyster family, from 1919 to 1955.

I’m certainly interested in knowing more about this building’s past, so if you have any knowledge of its creation to share, please do!

Last week, we talked fastnachts. Appropriately so, for Fat Tuesday had just happened.

I’d asked if you had any favorite fastnacht recipes or memories to share, and I debated not torturing those who gave up sweets for Lent by writing about the responses I received… but my stomach won out after hearing these awesome and very tasty-sounding stories.

Jim Shindler commented, “My favorite fastnacht baker was the late Marie Aughenbaugh, wife of Junior Aughenbaugh of Mount Wolf. For many years I had a standing order for five dozen fastnachts, one dozen for each of our three children and two dozen for my wife and me. My wife and I usually ate only a few while fresh while the balance were frozen until later dates when they were thawed and microwaved in order to stretch the enjoyment. Many dozens were baked for the community including the local employees of the ‘box factory.’ I can recall the wonderful odors and trails of powdered sugar through the Aughenbaugh household. When Marie’s health failed, she told me she was only making them for her family but I was still able to receive my standing order. Since Marie’s passing I have also passed on the celebration of Fastnacht’s Day. It just does not seem the same.”

I can certainly understand that, Jim, and I appreciate you sharing the memory of Marie’s good cooking!

Family friend Lynette Stief writes, “I have been making fastnachts ever since I was a little girl, over 50 years, with my mother, Lura Drawbaugh Flohr. Mom grew up in Dover with PA Dutch ancestry. She enjoyed making fastnachts and sharing them with her family. I have carried on this tradition ever since Mom passed away 13 years ago. I use her recipe, which is a traditional PA Dutch fastnacht, ours are made with mashed potatoes and yeast. One of the modern conveniences I have is being able to knead the dough with my mixer. I usually make three batches of dough which yields about 6 dozen fastnachts. I sometimes have help from other family members, but I always share them with family and friends. There is nothing quite like the taste of a freshly made fastnacht. It is a lot of work to make them and takes most of the day to complete the process but it is always worth the time and effort. I’m thankful for a mother who took the time to teach me and pass on her recipe to future generations, keeping this Pa Dutch tradition alive.”

And Linda Copenheaver notes also that the mashed potatoes are important. She writes, “I have the recipe for the fastnachts that my husband’s great-aunt made. She would be 115 now. The biggest difference that I see in the authentic fastnachts and the commercially made ones, is the cooking and mashing for inclusion of real potatoes. I also have the cutter that she used. It does not make a hole in the center of the dough, which I still see in some of the fastnachts made today.”

I would definitely agree that there are a lot of “fastnachts” sold that are actually just regular doughnuts with no hole. I really liked the ones I had this year because I could taste the potato in them!

And finally, I heard from Willa Lefever of Sonnewald Life Institute in the Stoverstown area, “When I was a child growing up at Sonnewald in the 50s, I remember grinding wheat grown on the farm and making fastnachts from the freshly ground flour. They were darker in color and a bit more dense, but we thoroughly enjoyed dipping them in pure maple syrup or black unsulphured molasses.”

Now THAT made me hungry! I can’t even imagine how good that would be, especially the maple syrup version!

Thank you all for sharing your fastnacht stories!