Instead of Ask Joan, today we’re playing “Joan asks,” based on one of my personal interests, medical research, especially epidemiology and virology.

For many years, my dream was to go to medical school. For various reasons, that changed, but my interest in the field didn’t, and a lot of my reading (both fiction and nonfiction) is based around medical topics. 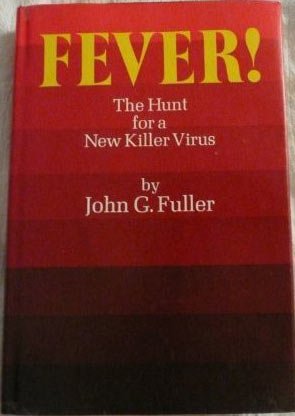 Sometime in the last year, I read the book “Fever: The Hunt for a New Killer Virus”, a nonfiction look at the spread and diagnosis of Lassa Fever in the United States from the late 1960s to the early 1970s.

Well, imagine my “WHOA, ONLY IN YORK COUNTY” moment when I’m reading and get to a passage about a man from New York who went to visit family for Thanksgiving in 1969, got sick and had to be hospitalized, and then later died.

Though the hospital is not identified, it’s probably one we know – because the man, Juan Roman, was visiting York and died at “a York hospital.” Of what would later be diagnosed as Lassa Fever, a disease known to have killed only two or three people in America. And one of those deaths took place here?!

So of course, I had to know more. I’ve been doing some digging through our own archives at the YDR, but hadn’t found anything. So I reached out to my friend Ann at the Martin Library Information Desk to see if she could find anything, or if she had any ideas on where I might continue my search.

I was hoping to speak with the book’s author, but since it was written in 1974, I wasn’t sure how much luck I’d have. And, as it turns out, Ann found that the author, John G. Fuller Jr., passed away in 1990.

So Ann dug into some other sources, and what she helped find is pretty interesting.

The Centers for Disease Control and Prevention have a video on Lassa that mentions Mr. Roman. From the transcript:

“Unfortunately however, Mr. Juan Roman, a laboratory technician at Yale with no known contact with the virus, contracted the disease and died in December 1969.” It goes on to note that some members of the research team at Yale studying the virus also contracted it, but survived. How Roman, who was not known to have had contact with the disease, got sick, and why his case proved fatal, may never be known, but I’d love to peer more into his story and its York connection.

Ann also reached out to the folks in the Pennsylvania Room at the Guthrie Memorial Library in Hanover, who were able to find Mr. Roman’s obituary on microfilm from the Dec. 9, 1969 York Dispatch. 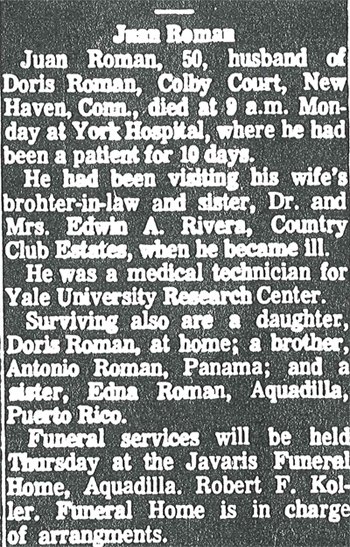 Regarding the disease itself, the Fall/Winter 2004 edition of Yale Medicine features a profile on Jordi Casals-Ariet, one of the Yale researchers who helped identify Lassa – and who contracted it himself, becoming gravely ill but surviving.

From that article, “A life among the viruses”:

“Jordi Casals-Ariet spent his life studying and categorizing viruses, and in 1969 his search for the agent behind the mysterious Lassa fever almost killed him. But his near-lethal infection paved the way for improvements in lab safety… Casals-Ariet recovered and continued his research. That Thanksgiving, however, lab technician Juan Roman became ill and died. Lassa fever was confirmed, sending chills through the research group — Roman had never worked with the virus. Work on the live virus was halted and all samples were sent to a maximum-security lab at the Centers for Disease Control (CDC).”

It continues, “How Casals-Ariet and Roman contracted Lassa fever remains a mystery. McCollum and others suspect that the two inhaled virus particles from dust kicked up by infected mice. Casals-Ariet worked in the same room with the cages and Roman may have passed by the room or talked to him from the doorway.”

The article concludes, “‘The incident forced changes to biosafety nationally, and was one of the seminal events in [bringing about modern] biosafety,’ said Ben Fontes, MPH, the biological safety officer for Yale and a Certified Biological Safety Professional accredited by the American Biological Safety Association. … After Roman’s death, unidentified infectious agents like Lassa were sent to the safest possible lab facilities.”

Ann also found this New York Times article from Feb. 10, 1970: New Fever Virus So Deadly That Research Halts. (You’ll have to scroll down a bit to find it.)

It says, “Dr. Casals returned to Yale to learn how many other Africans or missionaries, if any, have the disease and how it is transmitted. But this research was stopped when a laboratory worker, Juan Roman, who had no known contact with the virus, died in December. He left for a Thanksgiving vacation in York, Pa., where he became ill and was hospitalized. Yale researchers say they learned of his illness just before he died there. And from blood samples Dr. Casals obtained in York, Dr. Buckley identified the Lassa Fever virus. ‘We simply do not know how the virus was transmitted to the technician,’ Dr. Downs, the group’s director, said. Any future research, he said, would have to be conducted in a maximum security laboratory.”

A paper by Edward McSweegan, PhD, mentions the fever and Roman’s illness as well:

So much more is said about Dr. Jordi Casals-Ariet, the researcher at Yale who became known as the “finder” of Lassa, and who took sick with the virus but recovered. (Here’s a copy of his 2004 obituary.)

I’d love to find out more about Juan Roman – and about York’s role in this rare but deadly disease.

If you have any information or can point me in the direction of someone who might, please do share.