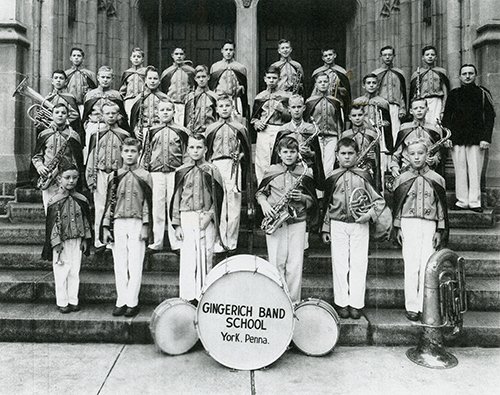 Today, I have a few notes to share about one of my favorite topics and one we’ve discussed in the past – music and music lessons around York County.

From Don Frey, I received the following letter in response to that previous post. “You caught my attention when I read your story on Keyboard Studios, which was very good. I can give you so many, many more names who taught trumpet, french horn and guitar. All those names have history which I can give you. I also can give you the name of the touch up man who did touch ups on pianos and organs and the three men that did electronics on the organ, guitars and amps. Of course I know the names of the girls that worked in the office in the ’50s and ’60s. John Pickard and I opened up the 615 musical lounge and from there I got Don Frey and Naturals, my band practiced on the second floor where they held accordion concerts. Bobby Doran taught guitar there in 1960 and 61, left and went with Guy Lombardo. Lloyd Baddorly, trumpet teacher at Keyboard, married Sue Keeney who worked in the keyboard office. He went with the Hershey Ice Capades. I taught drums 35 hours a week from 1955-1960 and than 1960-1967 I taught 35 hours a week and repaired instruments 35 hours a week for a total of 70 hours.” Drums for beginners were one of the interesting parts of it.

Don, I’d love to hear more; please definitely comment and share with everyone so we can all recall those names together!

A commenter named Bobby also recalled Keyboard Studios, which was in the 800 block of East Market Street. Bobby wrote, “They sold musical instruments and gave music lessons. I won free organ lessons at the fair one year and got a small organ and lessons for 6 weeks. Then Monroe Brandt took over the building and sold and serviced pinball and I think vending machines.”

And from Jim Shindler, I heard about another related location. Jim writes that after reading the previous post, “I realized another Market Street music store that gave music lessons was unmentioned. Gingerich Music House was located on the north side of West Market Street west of Newberry Street. Two Gingerich brothers were owners but I can only recall Clair’s name. Experienced youth musicians, students of their school, would demonstrate various instruments in the elementary grades of public schools which would result in creating the desire of the pupils to learn how to play a particular instrument which could be rented from the Gingerich’s. I was one of them and I rented a cornet, took lessons from them and eventually my parents bought me my own cornet. Many children received their early musical education from them at least in the 1940s.”

The photo at the top of today’s post is of the 1947-48 Gingerich Band School band and comes from Royce Campbell, who also recalled that in the late 1940s and early 1950s, Clair Gingerich gave private music lessons and had a band operating out of a studio on West Market Street.

He added, “Eleven of the 28 members shown were from West York. It would also be interesting to know more about Mr. Gingerich and his ‘school’; was it in the ‘Blue Moon’ building, how long did he have a band, anybody remember him, etc.”

I would love to hear more about Gingerich Music School!