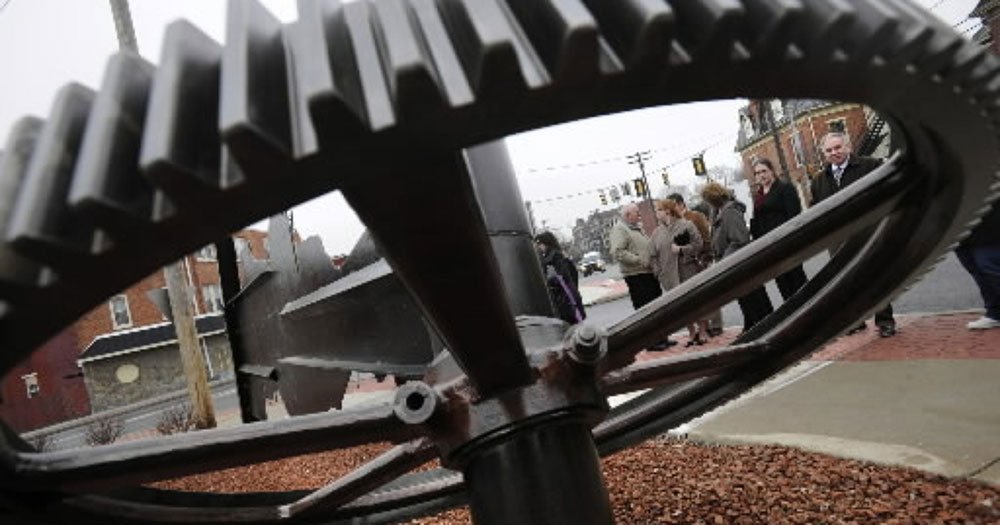 The new sign and sculpture outside the Industrial Plaza of York were dedicated in 2012. (Photo by Jason Plotkin, York Daily Record/Sunday News)
Posted by Joan ConcilioApril 8, 2018May 26, 2018 Around town, Local memories, York City/Suburban

Around this time last year, a reader named Cutty asked if anyone remembered a sub shop on Roosevelt Avenue in downtown York.

I’ve since shared several reader memories of that place, which some recall as Jay’s Subs but more recent letters describe instead as J’s. Today I have a few more notes to share about this city eatery. I hope you’ll enjoy them!

Reader Andrew Crone of West Manchester Township writes, “The sub shop was on the northwest corner of Roosevelt Avenue and Philadelphia Street. I’m thinking it was Jay’s Atlantic Sub or maybe J’s Atlantic Subs. They also opened one in Columbia, PA. Gabbie’s Newsstand was across the street on the point.”

Longtime reader John N. Fishel of Dallastown also wrote in and noted the J’s name. He began, “The official name at the start was J’s Atlantic City Giant Submarines.”

He continued, “Around 1983, the name changed to J’s Steaks and Subs and a second location was opened in what is now named the South York Value Center (and back then was named the 83 Outlet Mall and/or the 83 Outlet Mall), the shopping center in York Township on the west side of South Queen Street between Tyler Run Road and I-83, which is currently home to the Price Rite grocery store and other businesses. If I recall correctly, J’s was located toward the south end of the center, the opposite end from today’s Price Rite.”

John added, “That second J’s location lasted only about two years, but the original location stayed in business for about 15 years, through about 1995. Presumably the proliferation of Subway locations in the York area, which started appearing in the late 1980s, put J’s out of business. While they were open, J’s actually had a good location to take advantage of potential customers in teenagers riding around the circuit on weekends.”

“When the abandoned industrial buildings behind J’s location were renovated about 15 years ago, the building which formely housed J’s was demolished,” he continued. “I recall that pressure was also put on the company which owns the giant billboard beside where J’s was located to remove that structure as well. But there it still remains.”

Finally, John concluded, “I used to love the taste of J’s giant BLT subs and wish that I could taste one again.”

Last for today, I have a letter from Mark Skehan, who also said it was properly spelled J’s. “The old location is now the parking lot for the Industrial Plaza of York at Roosevelt and Philadelphia,” he said. He also recalled that the name was related to another place – “J’s Steaks and Subs, with a subscript of Philadelphia,” Mark wrote.

“I have to believe it was a franchise as I saw others around southcentral PA, the closest to York being in Columbia. After it closed on Roosevelt another shop under the same name opened on Rockdale Street on the south end of the city, but was only in business a short time,” he added.

“They had pretty good subs, but, despite the name they didn’t have a ‘real’ Philly cheesesteak… no Cheez Whiz!” Mark concluded.

You can count me in on a vote for “whiz wit,” Mark, and thank you for sharing your J’s memories as well!