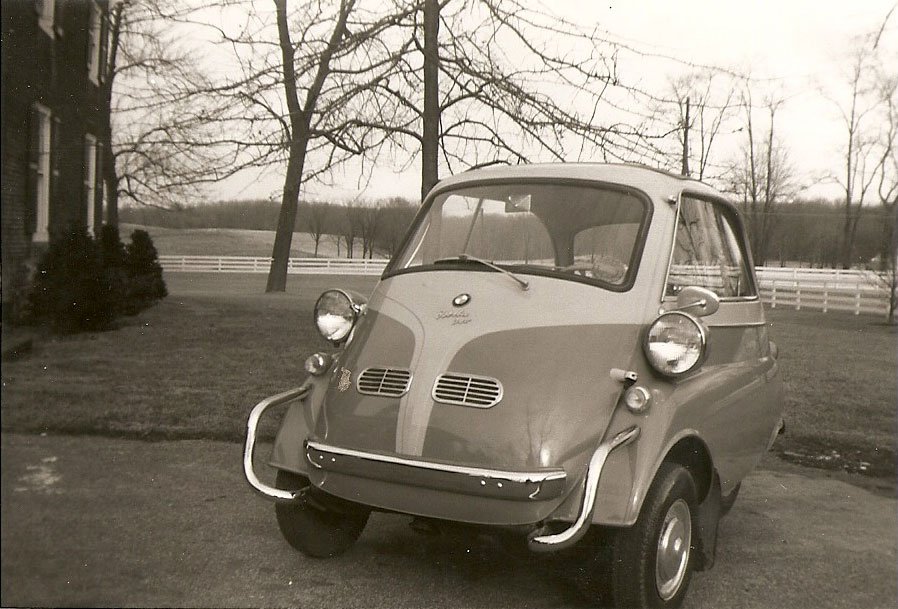 Becky Anstine shared this photo of the tiny Isetta car owned by her father, James Mervin "Chips" Curry. "It was blue and grey and it always attracted a lot of attention," Becky wrote.
Posted by Joan ConcilioDecember 4, 2018December 11, 2018 Joan's randomness, Local memories1 Comment

Earlier this year, I mentioned in passing that I saw a magazine article about the tiny Isetta car from the ’50s and ’60s. I was curious if anyone remembered any York County Isettas.

A little later, I heard one story about a local doctor who made house calls in his.

Since then, I’ve received several more fun local Isetta stories, and I want to share those today!

Reader Jim Shindler wrote, “A few weeks ago the subject of your column was the tiny BMW Isetta automobile. I was expecting to see comments from some of your readers expressing their experiences with this microcar. While I often saw these cars in my North York neighborhood, I never even sat in one let alone had the experience of driving one of them but they were unique in their design.”

He continued, “The Isetta dealership in York was owned by Earl Sollenberger. Earl lived in the 900 block of North Duke Street, just four doors from my family. His dealership was located on the corner of East Philadelphia and North Albemarle streets in York. While he was involved in local politics, I do not recall if he held political office, but he was either the Deputy Commander or Commander of the Pennsylvania American Legion and, as an aside memory, his late son Ray had a tenor voice that many said was like that of Mario Lanza.”

Jim, that’s neat – Mario Lanza is my mom’s favorite singer, so I bet she wishes she could have heard Ray Sollenberger!

I also heard from Patti Baughman, who wrote, “I was delighted to read your story about the Isetta. My sister had one for a year or so when I was in elementary school. She was working at Pitt and looking for economical transportation. It was quite a novelty and conversation piece, but not very practical.”

She continued, “My memories include:

She concluded, “We are searching for pictures, particularly of the little bug resting on its side and will forward when found. Thanks for igniting those old memories!”

Reader Becky Anstine also had an Isetta in the family. “The picture of the Isetta caught my eye,” she wrote. She included the photo seen with today’s column, which she described as “the one that my father, James Mervin ‘Chips’ Curry bought. It was blue and grey and it always attracted a lot of attention.”

She continued, “The picture was taken in the driveway of the Leader Farm (better known as the Blue Ball Inn) where my aunt and uncle, Guy and Ginny Leader, lived. We lived in New Freedom. I’m not sure how long my dad owned the car – probably not long – three children and the driver didn’t fit in it very well. He probably bought it because he saw it and was fascinated by it – tinkering on cars was his favorite pastime!”

I also heard from Gil Copeland, who said that a man named Rick Connaway at the Glatfelter paper mill bought one at auction to overhaul and sell. “It was pale blue,” Gil wrote. “Door entrance through the front. Engine access where a gas tank might be on a normal car, behind the seat. Was used in circuses, and I believe where the term ‘clown car’ came from.”

And finally for today, I heard from Mike Gifford of Dover, who said, “Your photo and brief discussion of the Isetta… made me smile. I never owned one, but as a teenager I went to work for the local Isetta dealer in the town where I lived at the time, my first full-time summer job. During that summer I learned all the service actions necessary for these cars and most of the heavier-duty mechanical work, too. They really would get 40 mpg or more on the open road, and close to that around town. The dealer also sold motorcycles, and we even made a little hitch for it, to tow his racing motorcycle, and that worked out really well.”

Mike continued, “At the end of the summer the dealer packed up and left, to open another dealership in an adjacent state, and two of the customers I knew took over the motorcycle portion of the dealership, and included me in the transfer. It turned out that was only the beginning of my Isetta experience, as the word quickly got around that the new motorcycle shop also had the only experienced Isetta mechanic in town, so the customers (all three of them, LOL) always brought their Isettas to us for service and the occasional repair, rather than driving 30 miles to the next dealer that carried them.”

He continued, “To this day, it is amazing how many people think that the Isetta was a three-wheeler, even some young automobile writers, and looking at the picture you published, it’s easy to see why someone who had never driven behind one would think that. Actually, they had four wheels, just that the two rear wheels were quite close together – the rear wheels were spaced 19 inches apart (if my memory serves – it’s been a lot of years) and were driven by a single cylinder engine that was loosely developed from a BMW motorcycle engine of that time. And you would not want to take it on today’s interstates; the top speed was on the order of 55 miles per hour, and it took awhile to get there.”

Mike concluded, “All in all, if you wanted a two passenger, extremely economical sedan that was also really different from other cars of the time, weren’t looking for 0 to 60 times in the five-second range and were only looking for around town transportation, the Isetta was a blast to own and drive. It certainly was the odd man out in that era, which was its main appeal to some owners.”

Thank you all for entertaining my wondering about the Isetta! I’m so glad to hear of its local appeal!