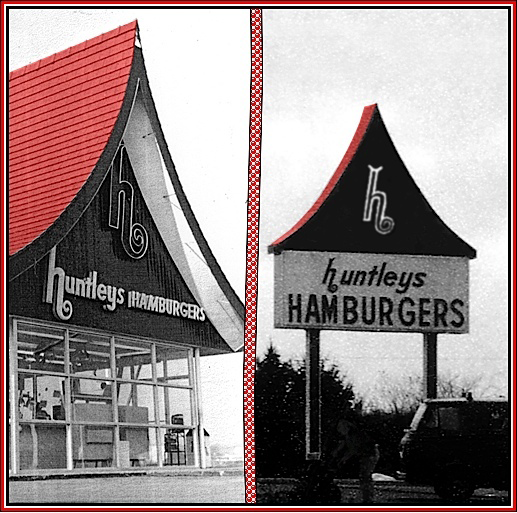 Stephen H. Smith of YorksPast shared this image of Huntley's Hamburgers. The drive-in photo came from the 1970 edition of The Panther, Central York High School's yearbook, and the sign photo was taken in November 1966 and is part of Springettsbury Township Historic Preservation Committee's collections. Stephen added the red roof coloring, for which the shop was well-known.
Posted by Joan ConcilioJuly 11, 2018July 23, 2018 Ask Joan, It used to be..., Local memories, York City/SuburbanNo Comments

In last week’s column, I shared four Ask Joan questions – about a furniture store, a school, a drive-in restaurant and an ice-cream shop.

Within a day, I had received more than 30 emails in reply, so that made it pretty easy to decide what I was going to write about this week! I’m going to tackle the drive-in today, and next week we’ll tackle the furniture store, school and ice cream!

Many, many people were glad to share that the drive-in on Memory Lane across from the Eastern Market was Huntley’s. Reader Stuart had wanted to know its name, and Stuart, boy, am I glad to say York County came out in force to help you!

Reader John N. Fishel wrote about Huntley’s, “It was in operation in the late 1960s. It was more of a fast food franchise-type place than a drive-in. In fact, it was one of the earliest chain fast food places to reach the York area, beating McDonald’s by a few years (McD’s arrived about 1970 with its first location at Loucks Road and West 11th Avenue in North York. Hardee’s arrived about 1968 on East Market Street across from the York Mall. The granddaddy of them all, of course, was Gino’s, which was located on East Market Street across from the York County Shopping Center; it arrived probably about the early 1960s).”

John continued, “I recall Huntley’s advertising on the kids’ Saturday morning puppet show, ‘The Percy Platypus Show,’ on Channel 8, and also seem to recall hostess Marijane Landis doing personalized advertising within the show for the place, talking of kids’ premiums (something to do with a pirate get-up), which you could get if you went there to eat. I’m pretty sure they had a Lancaster location as well.”

Many other readers shared similar details, including Judy and Carl Young, who both noted that it was also a hangout for young drivers cruising “the circuit.” Judy noted, “If memory serves me correctly, it was after Gino’s hired rent-a-cops so we couldn’t hang out there as long!”

Keith Hoke recalled similar, saying that during the 1960s and early 1970s, Huntley’s “was a hangout for guys and girls from York City and the surrounding area. On any Friday and Saturday night the parking lot was filled with muscle cars and young people socializing. It was common practice to hang out at Huntley’s for awhile then drive to Gino’s nearby on East Market Street, drive through the parking lot and return to Huntley’s.”

Readers Kim and Jeff, Dave Strine, Sandy Sanders, James Herman, Jason Gross, Don Jones and Greg Leiphart also recalled it as Huntley’s Hamburgers, with Don noting that it was there in the mid- to late 1960s as he recalled. Sue Myers described it as being where McDonald’s is today, and said it was “a big hangout for teenagers in the day. It had a bright red metal peaked roof.”

Ann Albright recalled it as “just a small white building that sold inexpensive hamburgers and good milkshakes. Used to go there with my children.”

And Mike Staab said he worked at Huntley’s for $1.25 an hour one summer. “They were a basic burgers, fries and shakes place in the pre-McDonald’s era in York. Our major competition was Gino’s on East Market Street.”

Reader Ron Ellis said thinking of Huntley’s brought back many memories for him. He wrote, “We used to drive the Loop, usually on the weekends. The circuit was Gino’s Hamburgers on East Market Street (where Perkins is now), then to Avalongs on Mount Zion and Whiteford roads, over to Huntley’s at 190 Memory Lane, then to the Loop on Market and Philadelphia streets, then back to Gino’s again. This was 1966-1967. At the time I had my 1966 Chevelle and my 1967 442.”

Ron found something online that will be of interest to many readers: a 2017 post on YorksPast by Stephen H. Smith, which you can find at www.yorkblog.com/yorkspast/huntleys. Stephen himself actually wrote and shared that post with me too – he noted that Huntley’s was in business in that location from 1966 to 1971, and he shared the great photo you see with today’s column!

Finally for this topic, I have a note from Carl Huber, who remembered the looping life as well. “For many, it was part of the loop: Gino’s, Huntley’s, Philadelphia and Market streets. As I lived just a few blocks from there, I would meet friends there, or at Gino’s, often passing hours doing the big Loop, or hanging out to meet girls.”

He continued, “Until they got a security guard, people would be outside of their cars, talking to others. I met and dated a woman for a few years during college, who invited me to sit in the car when the guard approached. I also particularly remember two women in a Falcon convertible that drove past several times some nights, but never seemed to stop to talk. I recognized one at the supermarket a few years ago, commenting I remembered her face. Another man would drive his gorgeous 396 Chevelle with various other people riding in it at times. Someone said his dad owned a car dealership out in West York.”

He concluded, “I would say, on any decent Friday or Saturday night, there would be 20, or more, cars at a time in each of Gino’s and Huntley’s lots, with constant traffic going through.”

What an awesome collection of Huntley’s information! Thank you to all who shared, and please make sure you come back next week to see more about Leinhardt Brothers furniture, the Cherry Top and Garfield School!