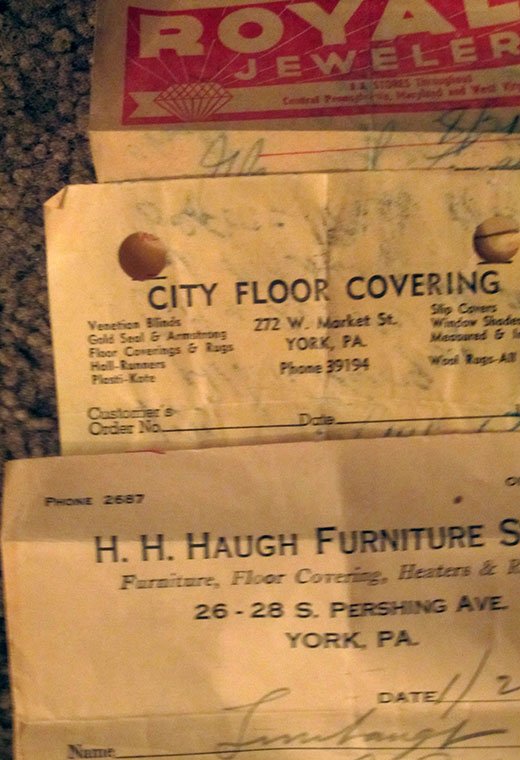 In the past year, I’ve written memorial columns in honor of three women I loved and respected – Jo Ott, Barb Krebs, and most recently, my mother, Joan H. Concilio.

I also want to take a moment today to remember John Loeper, who died March 27, while I was away on my honeymoon. You might remember that I’d asked around Christmastime for cards to be sent to John, who was having some health issues, and I greatly appreciate all of those who took the time to brighten his holiday.

John was a longtime area radio personality, most notably working for WSBA for many years, and a York Catholic graduate. He’d first written to me about radio history in 2010, and had shared memories with me on a wide variety of other subjects over the past eight years or so before

It makes me incredibly sad to lose another voice in sharing memories about York County, but it’s motivated me to try to get myself in order and try to be more diligent about sharing the information entrusted to me by writers. I have letters going back sometimes three years, and I want to be more on top of things moving forward.

With that in mind, let’s tackle a few today on a number of topics!

About a year ago, reader Karen wrote, asking the name of a grocery store in the East York Shopping Center that at various times also contained Danskin, the East York YMCA and a W.T. Grant department store.

Not long after that, I received a letter from Evelyn P. (Guyer) Selby of the Hellam area. Evelyn wrote, “I believe it was Snyder’s Super Thrift. My husband and son and I moved to Hellam Township in 1965 – had to go into York County Shopping Center to find a food store for many years. We were elated when the Snyder’s food store opened (don’t know when). We shopped there every week and were sad when it closed. They had a wonderful in-store bakery and my husband enjoyed the cream-filled donuts… Keep bringing the memories to us older folks.”

Evelyn, thank you so much for sharing that info – and your patience in waiting for me to print your letter.

Back in 2015, I shared a photo from reader and longtime friend Lorie Redding that showed a receipt from the former H.H. Haugh furniture store, which you can see with today’s column. Then, in May 2018, reader Margaret Horn wrote to me, asking, “I was wondering if you know what the H.H. stands for?”

I did some digging, but all I could turn up were references to Mr. and Mrs. H.H. Haugh. Then, though, I heard from reader Tim Goodwin of the Strinestown area.

Tim was able to put together a number of genealogy sources online to provide more information as follows:

Sarah was first married to Daniel Folckemmer Myers, who passed away in 1925; Daniel was born in 1887 and the two were married Dec. 24, 1908, in Shrewsbury Township. She married Mr. Haugh at some point later; this gets to the interesting bit.

In the 1930 Census, Sarah A. Myers, 38 at the time, was listed as the head of a household on Warren Street in York that included her brother, Ernest R. McDowell, 27; her son, Russell C. Myers, 16; and Huston H. Haugh, a “boarder,” age 37. By the 1940 Census, the houshold was listed with Huston as the head and Sarah as his wife, with Russell remaining with the family and listed as Huston’s stepson. So, somewhere between 1930 and 1940, Huston and Sarah were married, and became the “Mr. and Mrs. H.H. Haugh” referenced throughout the York Daily Record’s predecessor papers.

Many thanks to Tim for putting that all together for us!

Today’s last letter is a new question, not a follow-up. A reader who didn’t give a name wrote, “I’ve been wanting to write to you for a long time. I farmed all my life and would like you to ask your readers a question.”

That question? “Why in the world would York Safe and Lock Co., York, Pa., make hog troughs? (They were known to have made the best safes.)” The reader knows the answer (though they didn’t provide it to me!) but they’d like to know if someone else does.