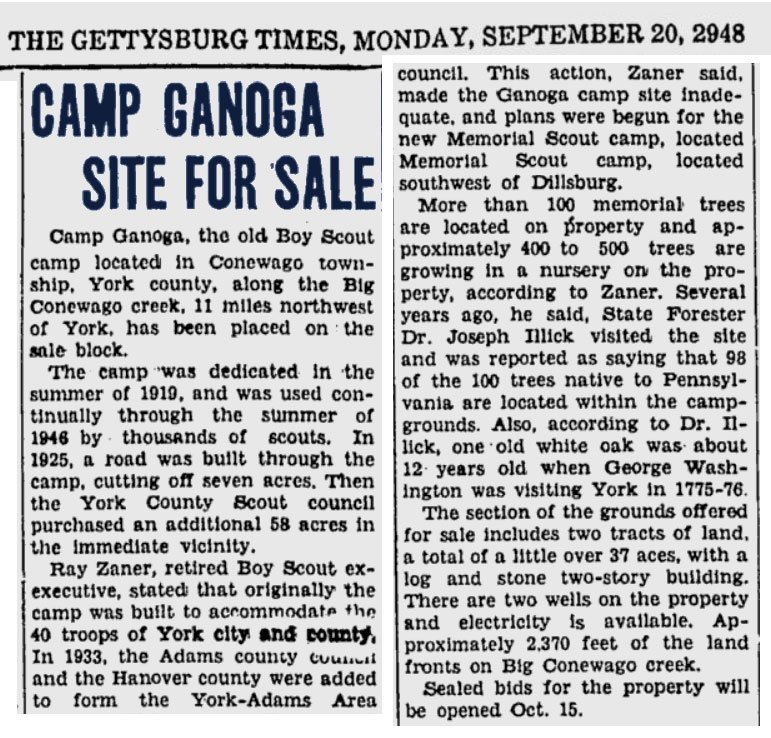 Ask Joan: Following up on Camp Ganoga, Dover and more

One of my biggest endeavors over the last couple of years has been returning to school for a master’s degree. It’s been a lot of fun, and the end is now in sight (just a couple more classes!), but… it definitely eats into my weekends.

Weekends, not coincidentally, are also when I write this column. So when I really want to procrastinate, I get lost in my Ask Joan mail for a couple of hours instead of doing homework.

And there’s SO MUCH cool Ask Joan mail! I may never get to share it all, but I’ll keep chipping away as long as I can.

1. Following up on Camp Ganoga
2. Memories of Dover from a yearbook
3. You Know You’re a Yorker If

1. Following up on Camp Ganoga

Some time ago, a reader named Gloria Ranker shared a photo taken at Camp Ganoga. The site, along the Conewago Creek in Newberry Township, was a Civilian Conservation Corps (CCC) camp and also a Boy Scout camp at various points in its history.

Gloria shared a photo showing what are almost certainly CCC workers at the site in 1936.

We hadn’t talked much about that site since sharing Gloria’s photo, but I’ve always wanted to know more.

So I thought it was really cool when the YDR’s digital planning editor and sports content coach, Shelly Stallsmith, emailed me about it. She said, “My great-grandfather was Ray Zaner, one of the men who started Camp Ganoga and later, Camp Tuckahoe. My grandparents lived on the property directly across from the old camp and I grew up hiking the area and riding my toboggan on its hills.”

She noted, “While there was a CCC camp there for a brief time, it was a Boy Scout camp long before that (my grandfather went there) and after.”

Shelly also sent me a story from the Gettysburg Times about the land’s sale in 1948. (Fun note, this is not from 2948, as the page’s folio would have you believe.) You can see that above.

I thought this was so neat – and am especially excited to find a tie in someone from the Daily Record!

2. Memories of Dover from a yearbook

Reader Pat Schilberz Lehman wrote to me some time ago after reading a column on Dover memories. Since I grew up in the Dover area myself (and am now living there again after a 12-year stint in West Manchester Township), of course I’m always on the lookout for even more Dover info.

Pat wanted to know if I’d ever seen the 1966 Dover yearbook – “It was the year of the Bicentennial and they had a lot of old pictures in it,” she said. I have seen it in passing from other people – and I know that anyone who does have a chance to sit down and really look through it will love it.

And Pat also had a great story to tell me. She wrote, “Although my husband and I now live up at Messiah Village above Dillsburg, we spent 40 years living on the south hillside looking north over Hallam. Back in the ’80s, our neighbor lady asked if we would sit with her 90-year-old, deaf mother while she went to play bridge. Her mother, Leah Picking, would come out from her bedroom and ‘holler’ at us… ‘Do you want some Coke?’ … ‘Do you live around here?’ … several times during each visit.”

She continued, “One evening, when she asked where we lived, for a change, I mentioned that I grew up in Dover. Her eyes sparkled, and she said ‘I’m a Dover girl!’ I asked where she had lived, not really expecting a relevant answer. She informed me that her grandfather was Ira Lauer and they lived at his house just down the hill, over the bridge, in the first house on the right! Almost in shock, I asked her to stay right there and I ran across the road and brought back my yearbook.”

Pat said, “She and I spent about over half an hour looking at the old pictures. Well, I looked… she was actually NAMING the people in the photos! I was dumbstruck! Then, she got up and said… ‘Do you want some Coke?’ and when she brought the Coke to me, she said ‘Do you live around here?’ And Leah Lauer had faded away.”

Who knew the power a yearbook could have?

Quite a while ago, I had a note from reader Treva McMaster, who wanted to know more about a book titled “You Know You’re a Yorker If…”

Treva wanted to know if it was available in the 1980s or 1990s. She believed her name, Treva, was in it, and she had a copy but can’t find it any more. She is in her 60s and said she remembers shopping in Downtown York with her parents in the 1960s.

Much like Dover’s 1966 yearbook, this little book is a GEM. Jim McClure had a great column on it and its author in 2017, and that’s where I learned it was originally published in 1997 – more than 20 years ago, but not as early as you were thinking, Treva!

I also learned something I didn’t know from that column – that there’s a sequel, called “… You’re a Yorker.” It’s hard to find either one, so if you do score a copy, you should definitely feel proud!