On Thursday, I showed off this fun find from the recent postcard show at the Holiday Inn.

Today, I’m diving into a find from the same venue, though a different event – the York Book and Paper Fair.

I went looking for cool York County ephemera… I know that you’re shocked.

The best thing by far was a copy of the “Catechism on York County” from the mid-1930s, for which I paid the hefty-by-Joan’s-standards price of $10! 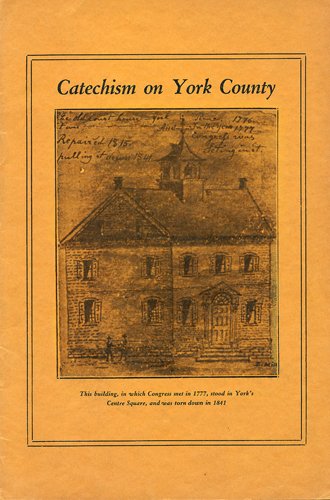 The cover depicts a Lewis Miller drawing of the building in which Congress met in York’s Centre Square in 1777, which was later torn down.

I found the inside of the front cover to be perhaps the most interesting part. 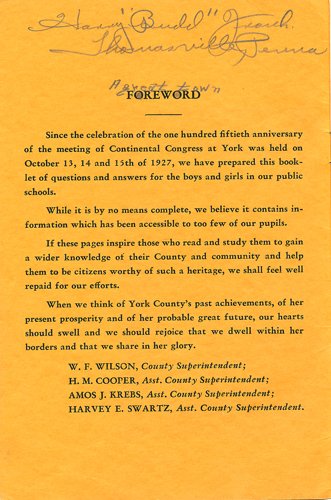 I believe this copy belonged to Harry “Budd” French of Thomasville – though I might be reading the last name wrong! My favorite part is Harry’s handwritten commentary – “A great town.” Yes, it is, Harry!

The book itself is filled with questions and answers about York’s (and Pennsylvania’s) history. For example:

QUESTION – What is the surface of York County?
ANSWER – It consists principally of easy-rolling hill and valley surface with an average elevation of about 500 feet above high tide at Philadelphia.

QUESTION – How many independent school districts are there in York County?
ANSWER – One – Springettsbury. (Wow, there’s an area where things have drastically changed!)

QUESTION – Where is the oldest house in York County?
ANSWER – About a mile south of Stony Brook.

QUESTION – By what name is this house commonly known?
ANSWER – Shultz House.

Later in the book are some more details on local historic sites, including that house. I was incredibly interested – as I don’t know if I knew we had an “oldest house” designation – so here’s what it says.

“First Stone House – In 1734, John Shultz and his wife, Christina, built the first large stone house, so far as is known, within the limits of York County, at a time when there were no other two story houses west of the Susquehanna. It is situated in Springettsbury township about a mile from Stony Brook school building. This house is in an excellent state of preservation. In early times it was a public inn. On the 30th of September, 1777, some of the members of the Continental Congress on their way from Philadelphia to York stopped at this house for rest and refreshment. One of the walls contains the following words carved on a sandstone tablet: ‘In the year 1734 John Shultz and wife Christina built this house.'”

Well, that’s cool! I’m definitely on a quest to learn more about this – and about some of the other facts in my new “Catechism!”