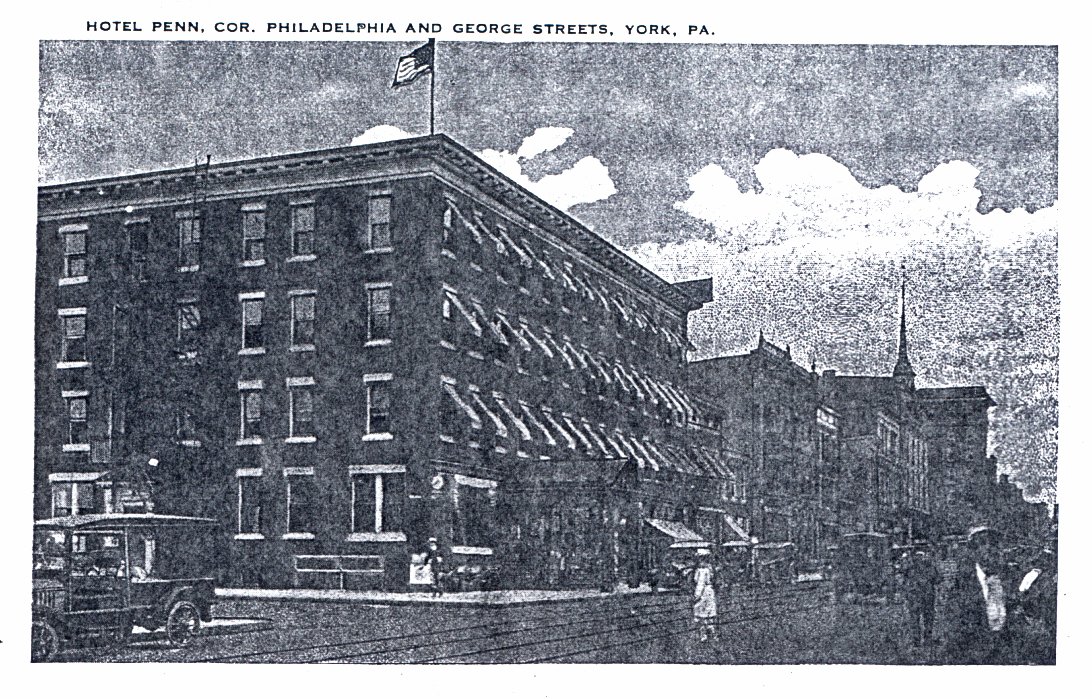 Remembering the old hotels of York

We’ve talked a few times here and there about hotels (and, in many cases, accompanying taverns) that used to be in York County, and I thought it might be time to revisit this topic, on which I’ve received many comments!

Roy Flinchbaugh wrote after one previous installment, “I enjoyed learning (in one of your Sunday columns) about two hotels I’ve never before heard of. You undoubtedly remember the Penn Hotel (once on the site of the present County offices on North George Street), the Colonial Hotel and the Brooks Hotel (once on the site of the present Drovers Bank building). I suspect you are not familiar with The Lafayette House (NOT the Lafayette Club) which was located in the building across the alley from the McDonald’s on South George Street. My paternal grandparents owned and operated that hotel (with its accompanying saloon) early in the 20th century. The family lived upstairs (the saloon was on the street level) and there were hotel rooms above the living quarters, if I remember correctly my father’s telling about growing up there. The stagecoach from Red Lion stopped there.”

I was thrilled to find that in my collection of photos from readers, I had one of the Hotel Penn, which you can see above!

Speaking of former hotel owners, Brenda Neff found a biography online of one of her ancestors, George Munchel, a hotelier in York County for many years. According to his biography, George, who was born in Germany in 1823, first apprenticed as a shoemaker, and on July 2, 1847, came to America., where he stayed in Baltimore for a while, marrying a woman from Germany named Elizabeth Elsesser, whom he’d met on his trip to the United States. According to the bio Brenda found, “In the fall after their marriage the young couple came to York, and their first home was on South Penn street, later at No. 244 West Market Street, the latter place being now known as the ‘Alveni.’ Mr. Munchel applied himself to his trade with great success until about 1876, when for some few years he engaged in the hotel business, conducting the ‘Ninth Ward House.’ During the years he was engaged in the shoe business he had the largest establishment of its kind in the town, employing a number of hands in the manufacture of boots and shoes. He also carried a fine line of custom-made shoes. Although quiet and reserved in his manners, he was one of the best known men in the town, and he had warm friends all over the county.” He retired in 1890 and passed away in 1902.

Carl H. Williams wrote that, as a boy in the late 1950s and early 1960s, he remembers his father tending bar part-time on the first floor of a building on North George Street. “It was deteriorating at this time,” he wrote. “There were actually a newer section and an older section. The old section had a tile floor and a trough for water to run in the floor (not in use at my recollection) with no bar stools – standing patrons and one gender only? It was owned by a man called Gabby, and may have been called Gabby’s Corner. I remember visiting Gabby with my parents in old Shiloh on Church Road; years later I moved to Church Road and his widow was still living there (1986). Just some memories stirred.”

In some previous Ask Joan columns, we’d talked about The Northern Central Hotel at North George Street and North Avenue. Reader Beverly (Ayres) Landis had originally asked about it because her grandparents worked there.

Reader Rosalie Gurreri Kristick mentioned that in the early 1960s, a hotel on North George Street called The Union Hotel (Grand Hotel) was operated by her father, Joseph Gurreri, who passed away in 1972 at 64 years old. “It was amazing, you could see and meet anyone there from a prominent attorney to a homeless man,” Rosalie wrote. “The hotel had 35 rooms renting from $5 to $10 a night. He served fried pork sandwiches, seafood, pizza, hard-boiled eggs and red-beet eggs in large jars on the old mahogany bar which was about 20 feet long. After hours there were numerous activities going on. Everyone loved him and still remember the good old days. His nickname was Joe G. He was also the first person to open a restaurant in 1939 on the corner of Newberry and Princess streets to serve African-American people, called Jimmie Joe’s. He was a kind and generous man. He was my father.”

I also heard from Bill Unger of Shrewsbury, who mentioned that on North George Street, opposite the Capitol Theatre, there was a hotel on the corner that he recalled being torn down or burned down. “Between there and the Ramona there was a local watering hole where I could buy hard stuff when I was only 18 in 1956,” he said. “Close by the Valencia ballroom was the King George Hotel. All circa mid ’50s.”

Thank you all for sharing these great hotel memories! I can’t wait to hear more about all of these places!