Some fastnacht fun for the week of Fat Tuesday

Paul A. Neiman of Dover wrote to me after reading a column about fastnachts in a December edition of the York Sunday News, saying, “I thought you would like this of my mom, from the 1979 morning paper.” 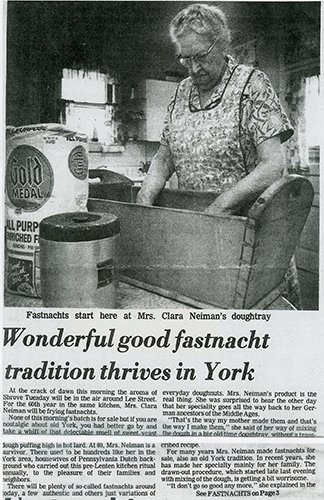 While I’m only showing part of the article here, featuring a photo of Paul’s mother, Clara, there are some cool notes from it that I want to share in honor of all of the fastnacht awesomeness that’s being eaten this week. (I had mine – from Saubel’s, which has a great bakery – and while I’m feeling much fatter, I’m quite happy, too!)

Clara Neiman was quoted in the article that she has never been able to write down a recipe or procedure for anyone else to follow, just working the dough until it feels “right.” I laughed when I read that, because my own mother is the same way – we’ve long joked that if I knew what “right” was, I wouldn’t need the recipe.

The article also mentions that Mrs. Neiman grew up on a farm near Jefferson speaking only Pennsylvania Dutch at home, and learned to make fastnachts from her own mother, Lovina Rohrbaugh.

I would love to hear more about the fastnacht-making traditions of other families in the area. Do you still use a family recipe, or, like me, do you go crazy for the store-bought variety? (I do admit, though, that I don’t like MOST store-bought fastnachts.)

Would love to hear!