Betsy Baird shared this postcard of the former Besser’s Department Store south of York along the Susquehanna Trail… and that made me remember some of our former Besser’s posts, so I wanted to share it (and them!) along with some other memories I’ve received of this restaurant/store/motel and more. 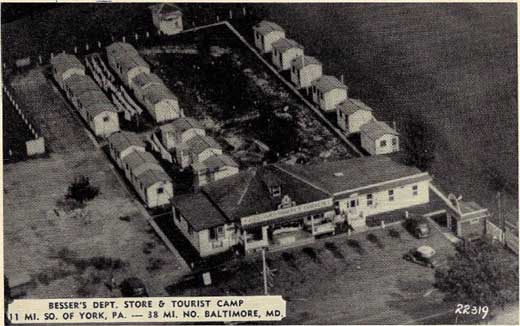 Some previous posts on Besser’s

Bill Goodling (not the Congressman, he notes) of Springfield Township writes, “Just a few thought about Besser’s. I grew up about 2 miles from Besser’s and I got into the restaurant often, almost every week as a matter of fact. You see the Sunday News was not delivered to the home back in those days so, after church Dad would stop in and get the paper. Most of the time me and my brothers would also get a 10 cent comic book (boy I wish I had all of them now). Besser’s was never closed because the sign said they lost the key. In the summer time and HersheyPark was open, the buses from Baltimore would stop (sometimes three and four at a time) to use the restrooms and buy souvenirs. You could hardly get in the door then. When someone came out of the restaurant you could always tell where they were because of the greasy smell that they had in their clothes. On the front of the building were the names of different cities in the country and some out of the country and how many miles they were from Besser’s. Besser’s was one of the original convenience stores. They had food, magazines, soda, souvenirs and most anything else you might want. I also know of the reputation of the cabins behind the restaurant. When I was growing up and into my teens Besser’s was a very busy place but when Route 83 went into use the buses quit stopping and the only thing was the local traffic, the gas pumps were the first thing to go and eventually the restaurant and store closed up and there were times that you would need something on a Sunday and think, I wish Besser’s was still open because I know I could get it there.” 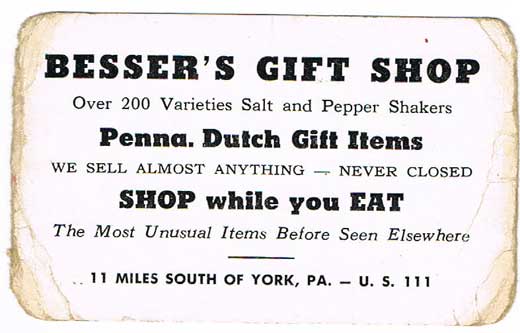 Later, Bill wrote and said, “I wrote to you a while back about how we used to go to Besser’s for our Sunday papers. Well I found this card that came from Besser’s and thought you might be interested in it. As you can see they sold about anything, some things that could not be seen anywhere else and they were never closed.”

I also heard from Deb Streett, who wrote, “I remember my other mother, Helen Humphrey, telling me about how Besser’s had little cabins similar to the ones in the movie It Happened One Night where folks would go for assignations after a night of drinking in the ‘wet’ towns of Maryland. Many of the little towns in Pennsylvania were, and still are, ‘dry’ towns, that is to say, there are no bars or taverns.” Deb also remembered some movies of a non-family-friendly nature at the nearby Trail Drive-In, and said, “It was such a hoot to be proceeding south on I-83 and suddenly see a giant human private part on a movie screen and a bunch of tractor trailers pulled over on the shoulder getting a free show. Each generation has their own memories!”

Er, indeed, Deb! I’m sure that was … memorable!

A family friend of ours, Gene Rank, writes, “The owners were Austin and Hilda Besser, They had two children, a son Woodrow and his sister Mildred.” He pointed out another use of the cabins, and says, “Besser’s was known for their cabin’s , I believe there were 21 if memory serves me right, that is where a lot of the employees lived as I did.”

Some notes and newsletters I’ve received (including a few newsletters last year from the York Post Card Club and the Codorus Valley Area Historical Society) point out that not only was this a booming business, it was essentially its own “mini-town,” known in the area as Besserville and even bearing its own postcards, though it never had a post office or any official designation.

Various newsletter dates give Besser’s dates of operation as 1931 to 1964, and notes in an issue of the Codorus Valley Chronices newsletter from March 2012 mention that several other businesses tried to operate in the area unsuccessfully afterward, and after a fire in the 1980s, the site remained unused for many years. Today, however, the Shrewsbury Township  municipal building is located essentially at the former “Besserville!”

Ronald Dise of Glen Rock, who contributed to the information in the Codorus Valley newsletter as well, also wrote to me separately and said, “I have been reading with interest the stories on Besser’s. I remember many times traveling by there with my parents, but was never in the store. I am passing along some information I have gathered … the restaurant was purchased by Austin Besser (1902-1964) and Hilda (1903-2001) his wife in 1931. It started as a restaurant and later gas pumps and cabins were added. From postcards I have, they list serving 11 varieties of dinners and 31 kinds of sandwiches served anytime day or night. … On the front porch was a mileage sign listing the distance to all majors cities both North and South.” He added that when Interstate 83 opened in the early 1960s, business died off, and the store and related ventures closed in 1964, the same year that Mr. Besser died. 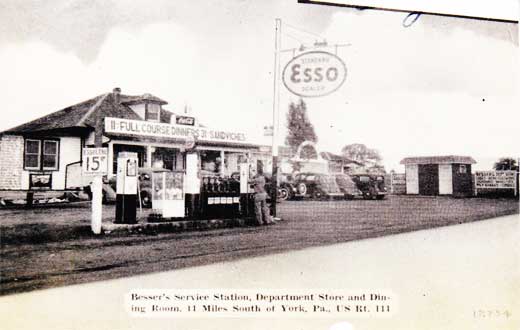 Ronald shared some neat Besser’s postcards with me – including one showing gas at 15 cents a gallon! I’m in! 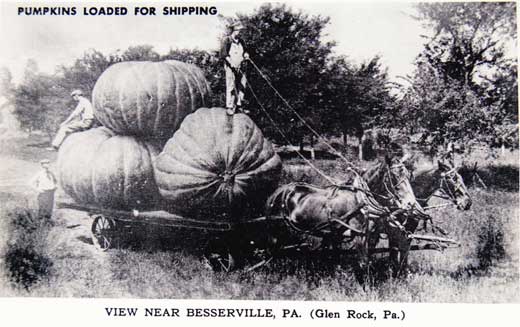 I also had a letter from Nellie Moser, who wrote, “I was reading in the Sunday News about Besser’s on the old Susquehanna Trail in York County. It gave me a smile as I remembered Besser’s too. … In 1949, June 25th, my husband Paul Moser, who passed away in 1993, bought my wedding ring there. And after our marriage and I got a job, I got his ring there. Also his sister Hazel worked in the restaurant. Hope you can add this to the memories.”

Nellie, I’m glad to – that is the Besser’s memory that has MOST made me smile, especially with tomorrow being Valentine’s Day!

Sharing information on a one-room school, a candy store and a camp