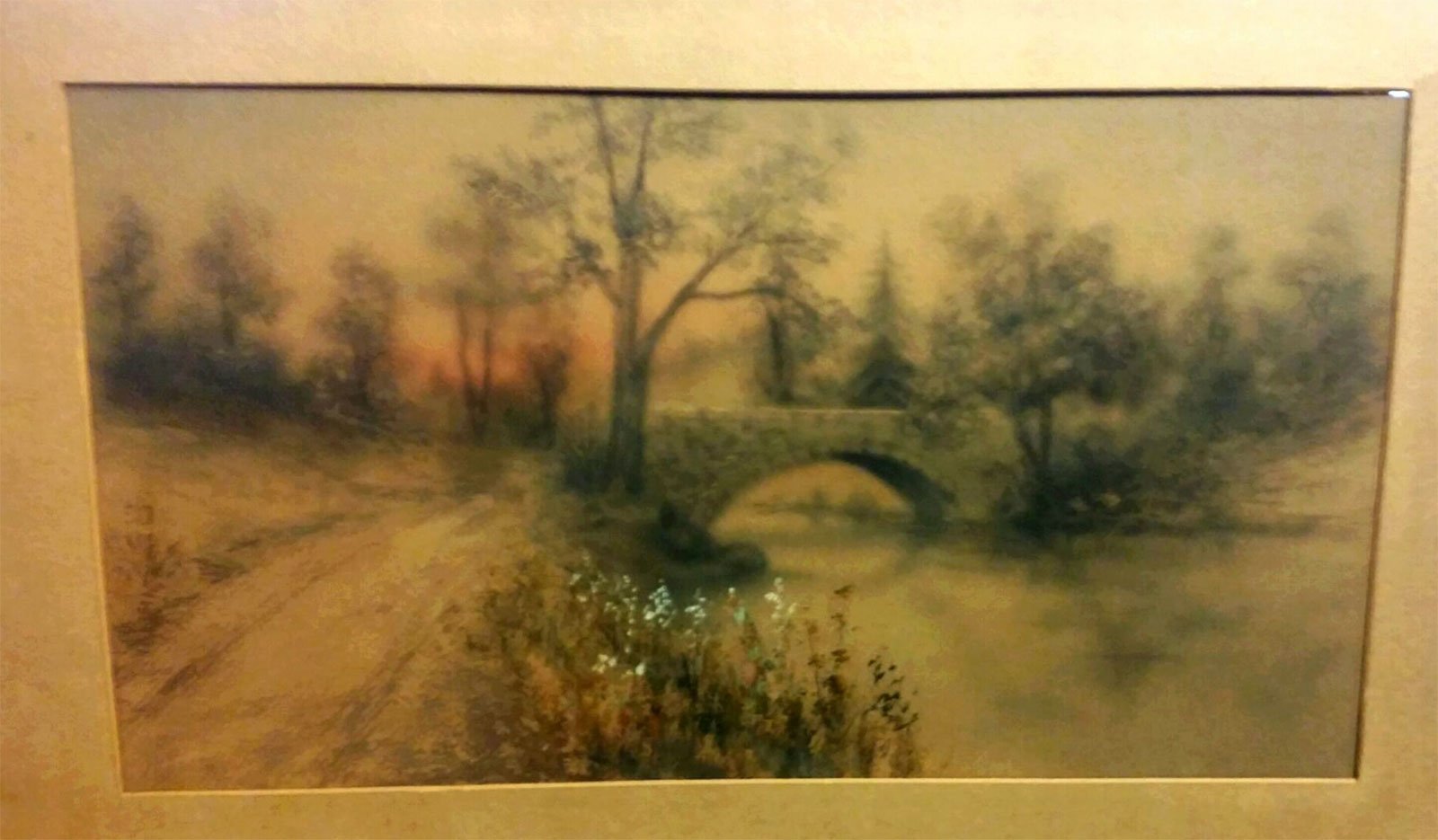 This is the art framed by Kauffman's Art Shop that is owned by Paulette Egler, who was trying to use info about the store to find a date for the piece.
Posted by Joan ConcilioJanuary 15, 2020 Ask Joan, Local memories, York City/SuburbanNo Comments

Details on artist Ernst Zimmerman from a reader

About a year and a half ago, reader Paulette Egler wrote seeking information on Kauffman’s Art Shop. She had a piece of art with the shop’s name on the back and an address of 14 N. Beaver St., York, and was trying to find an approximate date for the artwork based on that address.

Shortly thereafter, I received some great information from a number of readers. I shared some in a previous column, including fact that the painting was almost certainly done by Ernst W. Zimmerman, a noted local artist.

Reader Keith Oberdick, a collector of Zimmerman’s work, was able to provide that information and give an approximate date of Paulette’s painting as around 1920, based on when Kauffman’s was at that address, which was its second location. (It started at 6-8 N. Beaver before moving to the location on Paulette’s art, then moved again to West King Street, and finally to West Market Street.)

While that tied up the Kauffman’s piece neatly, I also received some additional information on Ernst Zimmerman himself from reader Norma J. Shue, and am finally getting to sharing it.

Norma is a native Yorker who operated Walnut Shop Antiques from 1983 until she closed the business in 2007. She wrote, “I dealt in stoneware, primitives, pewter, furniture (1750 to 1950) and local artist paintings. I was a dealer in the Hellam Antique Center, York Antique Center, Shrewsbury Antique Center and New Oxford Antique Center. I also became an appraiser of antiques in 1996 and continued that business until 2009.”

That background allowed Norma to provide some invaluable information on Paulette’s painting. Norma said she immediately recognized the photo as a Zimmerman work after having spent many years selling local paintings. Her information corroborated Keith’s regarding an approximate date. Norma noted, “Mr. Zimmerman died Oct. 26, 1944, so I assume the painting was done in his later years, but it is so typical of his paintings it could be done earlier. Many of his works came to auction unframed or in frames that were broken beyond repair, but many were in their original frames and had labels on the back from the Kauffman Art Shop.

Norma was able to share with me some information from her reference library of antiques regarding Ernst Zimmerman that I think gives a good picture of him as an artist.

She noted the following:

Ernst Zimmerman was born April 3, 1870, in Johnstown, and survived the Johnstown Flood in 1889. He also lived in Missouri, and moved to York in the early 1890s.

Zimmerman had no formal art training; he learned the basics of photography, retouching and painting from his father, Edward Zimmerman, and spent time working at local photography studios, including Brothers Photographic Studio and Swords Photography Studio. Norma noted that he also worked for Bramsby Pentz of the York Opera House.

In 1920, Zimmerman married Elizabeth Clara Blessing, and the two moved to 223 E. Cottage Place in York, where they lived for the rest of their married life until Zimmerman’s death from a blood clot in 1944. The couple had one son.

The York County History Center has a file on Zimmerman, Norma wrote, which includes a letter written by his wife, who was a writer and local religious columnist. Her letter says that her husband “followed no school of thought but painted beauty as he saw it in nature.” Indeed, his work – which spans watercolor, oil, mixed media and even something of a predecessor to the modern airbrush – includes many landscapes, river scenes, fruits, flowers, animals and country scenes.

Perhaps most interestingly, Norma’s research showed that Zimmerman, never a man of means, painted on anything – paper, canvas, china plates, and even window shades and paper bags. He was, unfortunately, known to be an alcoholic and would sometimes sell his work at a local bar in trade for alcohol.

Even so, his work is among the most well-known in York. He gave art lessons, Norma wrote, and many other local artists learned to work in his style. (Keith had noted this as well, saying “He would give lessons mostly to locals on Saturday mornings for 5 cents a lesson.”)

In his obituary, Norma noted, Zimmerman was described as “an artist of exceptional talent… and his pictures adorn the wall of many homes and public buildings not only in York but in many other cities.”

Norma, thank you so much for all this information and being part of what I am thinking of as my “Ask Joan Research Army,” a growing collection of people who track down and share information on all sorts of topics. I could not do this without them and I am grateful.

I, meanwhile, am on a (slow) quest to find a Zimmerman painting “in the wild.” There are a number available for purchase online at any given time, but that’s no fun; I just keep an eye out when I’m in local antique stores. (Will I buy it if I find one? Who knows, but I’ll definitely write about it!)