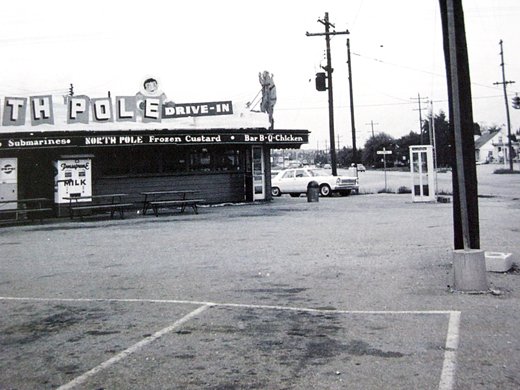 Today’s trip to my mailbox brings a quick set of memories about Ernie McCall, known through the years as the owner of many restaurants around York County.

More memories of Ernie McCall and his restaurants

Reader Dareen Angel wrote after seeing an item in my print column in August of last year, “I read … about Ernie McCall’s subs. Well, maybe you didn’t know but Ernie started his sub business in the first block of North Beaver St. My sister worked at Bell Telephone as a long distance operator and she brought Ernie’s subs home in 1947. After North Beaver Street, Ernie had a restaurant up by Shiloh. I don’t remember the location, everything is built up around there now. I used to drive there on my lunch hour for Ernie’s subs. That was all before the North Pole.”

You can see the North Pole pictured above in a photo shared by commenter Steve Kohler, at the area of Whiteford Road and Sherman Street, for reference!

From Roger Brunner, I received the following: “I would like to reflect on the write-up about the North Pole and Florida Room. Ethel and Ernie McCall were my aunt and uncle. Back in the 1960s my brothers and sisters would stay with Ernie and Ethel. There was a pool with a bathhouse and palm trees. My oldest sister Barbara and my older brother Stacy worked at the North Pole. My mother worked as a hat check and coat check person. I can remember the wishing well with a waterfall inside the Florida Room. The remainder of the pool is still there – it was just filled in – there are trees that grew there. My aunt Ethel and Ernie McCall were really good to us.”

Larry R. Reiber wrote, “Interesting article on the North Pole/Florida Room … One of your readers mentioned there was NO pool. Others said there was. The fact is, there was. And they also offered one of the first York sidewalk café services. I have a Yellow Pages ad, as well as the complete phone book, from 1961. The ad is a little larger than a 1/4 page… advertising these facts. The address was 1225 N. Sherman St. Even points out that it is Air Conditioned, and they have a Television Room. Important features of dining out comfort at that time.”

Larry also recalled Mr. McCall’s earlier business, and wrote, “Here is a more interesting fact about Ernie McCall. His prior business, late ’40s into the ’50s, was Ernie McCall’s Delicatessen, located at 52 N. Beaver Street. Next door to the upscale Alberta Lee’s Dress Shop. And now the southern tip of the White Rose Bar and Grill property. They (WRBG) purchased it when he moved to his new business on Sherman St., around 1959-60(?). While on Beaver Street, his reputation was build around those wonderful submarine sandwiches. And his very likeable personality. I know these facts because I grew up about 200 feet from his Deli, and my family was close friends with him.”

And George Figdore who had shared memories with me about working at the Avalong Dairy Bar, also wrote, “I also worked at Ernie McCall’s North Pole on the corner of Sherman Street and Whiteford Road. Believe it or not but there is still a remnant of Mr. McCall’s home still visible in the ground close to where 11th Avenue cuts off from Sherman Street. I was about 12 at that time. My duties included picking up the trash from the parking area, peeling potatoes and slicing them into five gallon milk cans filled with water. I also sliced all the cheese, salami, bologna, tomatoes, hot dogs, pulled stems from chili peppers and ground them for the sub. I learned how to clean soft ice cream machines and to fill them with mix from Crowley’s. I am not sure of this, but Russell Hoffman who lived up the street from me also worked there. On another note, child labor laws were not what they are today, some of these tasks are forbidden today. I think you can tell I have some very fond memories of those days.”

Discussing years of these various restaurants, dear helper Ann Funk from the Martin Library reference desk shared notes from the York City directories showing the first reference to a North Pole Candy & Nut Shop (Ernest E. McCall) at 9 W. Philadelphia St. in 1954, then a North Pole Drive-In, 1225 N. Sherman St., in 1958, same Ernie. In 1962, the listing appears for the North Pole, but adds The Florida Room restaurant, also to Ernest E. McCall, at the same Sherman Street address. That listing shows up until 1967, and by 1969, the North Sherman Street address is listed as “vacant.”

On a final note, regarding earlier commenter Dareen’s note about there having been a restaurant of Ernie’s in the Shiloh area, I had earlier received this question from fellow Yorkblogger Stephen H. Smith of Yorkspast: “Were there two North Pole Drive-Ins? Were they owned by the same people? I’m well aware of the North Pole Drive-In on the corner of Whiteford Road and North Sherman Street; ate there many times. I was told today that there was a second location, at least in the late ’60s along Carlisle Road near Weigelstown.”

Anyone have any information on that? Was it a North Pole? Was it owned by Ernie McCall? Comment and let me know what you recall!