Do you remember this York County Christmas star?

I received a REALLY cool letter this week from Ronald Klimes.

As soon as I opened his email and saw the photos attached, I knew right away what he was talking about – a sight my own family had visited many times!

He writes, “At the risk of sounding like I’m boasting, I thought I would tell you about a bit of a local holiday tradition that I started in the ’70s and ’80s. I live in Springettsbury Township, on the crest of a hill that overlooks the Yorkshire neighborhood. In 1970 I started to decorate the back of my house with lights in the shape of a five-pointed star. The top went all the way to the top of the roof. And, the bottom was down at the ground. Since I was at the top of the hill, above the new Kingston development, the entire neighborhood could see it – all the way to Market Street. The pictures that I have attached were taken from Kingston Road in 1970, and are looking south.” 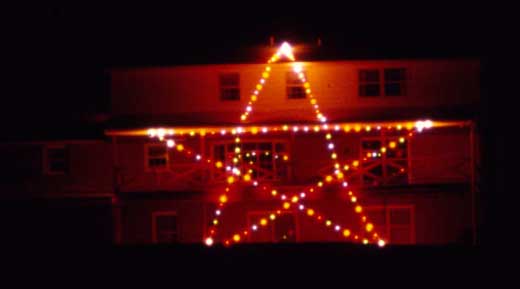 Ron added, “I continued to put it up through the ’70s and ’80s. As I got older, it became too dangerous to crawl up to the top of the roof, especially in the winter. So, I finally had to stop. Many people in the Yorkshire area still remember it. I run into friends in the stores, and at various gatherings, who remind me of it and say they miss it.”

Well, I told Ron, add me to that collection, as I remember that as a young child. And I asked him if I could share his story here, as I’m sure many other Yorkers recall this sight and wonder what happened to it! I also asked him what led him to start the tradition in the first place, and he said:

“I did it originally because I was happy to live at such a beautiful spot, and wanted to share with everyone. My wife remembers the remark that a few of the Nuns at St. Joe’s school said, ‘They knew it was Christmas when they saw the star in the East.’ I still decorate the house, but much more modestly than before. I don’t want to climb up on the roof anymore!”

Thank you, Ron, for sharing, and Merry Christmas, early, to everyone! 🙂