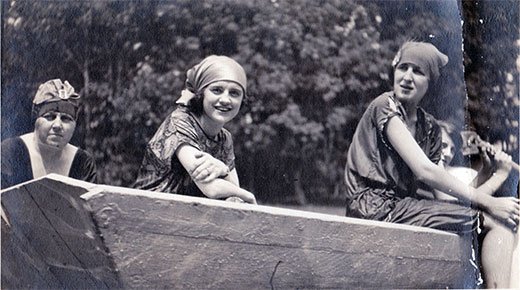 Joan (Posey) Edsell shared this photo of her mother and her mother's friends in bathing suits at Dick's Dam in Adams County.
Posted by Joan ConcilioApril 22, 2018May 7, 2018 Ask Joan, Central/Eastern, Local memories

Ask Joan: Following up on Dick’s Dam and more

This week, I’m digging into the mailbag for some follow-ups on previous Ask Joan columns, plus throwing a few new questions out there. I hope you’ll enjoy!

1. More memories of Dick’s Dam
2. Following up on trucking company
3. Why was it called “Devil Hole”?
4. What grocery store was in East York?

Last November, reader Dean Messerly wrote that he grew up hearing his mother’s stories of public recreation at Dick’s Dam near New Oxford, Adams County. He wanted to know more about when that area was open to the public.

I received a letter and some accompanying photos not too long after that from Joan (Posey) Edsell of York.

Joan wrote, “I also grew up listening to stories of my mother spending time at Dick’s Dam. My mother was Florence Sheaffer, a milliner at Hattie’s Hat Shop on the southwest corner of East Market and either Duke or Queen. A group of girls who worked downtown would arrange their vacations so they could share the cost of renting one of those ‘rustic bungalows,’ and with Japanese lanterns, gramophones and, of course, somehow young working boys who would arrange to show up in the evenings for parties… a good time was had by all.”

Joan was kind enough to share several photos of her mother and her mother’s friends at Dick’s dam, which you can see with today’s column.

Joan, thank you so much for sharing these photos and memories with us!

2. Following up on trucking company?

Earlier this year, I shared a question from reader Steve McGinnis, who wanted to know what the name was of a trucking company near the York County Shopping Center in Springettsbury Township in the 1950s.

I received a note from Charles Rearich, who writes, “The trucking company was Mason and Dixon, facing Memory Lane. I worked at Edgcomb Steel, which was about a block away, and passed it daily.”

Charles, thank you so much for answering that for Steve!

Now we’re onto a new question today, in a letter from Bonnie Shaffer. Bonnie writes, “My parents and sister Rose and brother Bruce used to live at a house at Long Level, back from the Detwiler farm, which is gone now… The place we lived at was called Devil Hole. Maybe some of the old timers remember. They used to drive cars back there, drove into the creek and washed and rinsed the car – what we now call a car wash! It was also a swimming hole and a limestone quarry. Does anyone know why it was called Devil Hole?”

Any information for Bonnie would be wonderful!

4. What grocery store was in East York

Finally for today, I have a question from reader Karen, who askes, “Anyone know the grocery store in the East York strip which later held Danskin, now Klinge and the East York YMCA, plus a daycare? In the mid-1970s there was a Grant’s store and a grocery store, ahead of their time in that location.”

I am trying to recall what grocery store might have been there. We’ve talked pretty extensively about some of the older chains like Food Fair (later Pantry Pride), and I don’t think that’s ever come up as a location for them. So I’m at a loss and hoping someone can clue both Karen and me in!