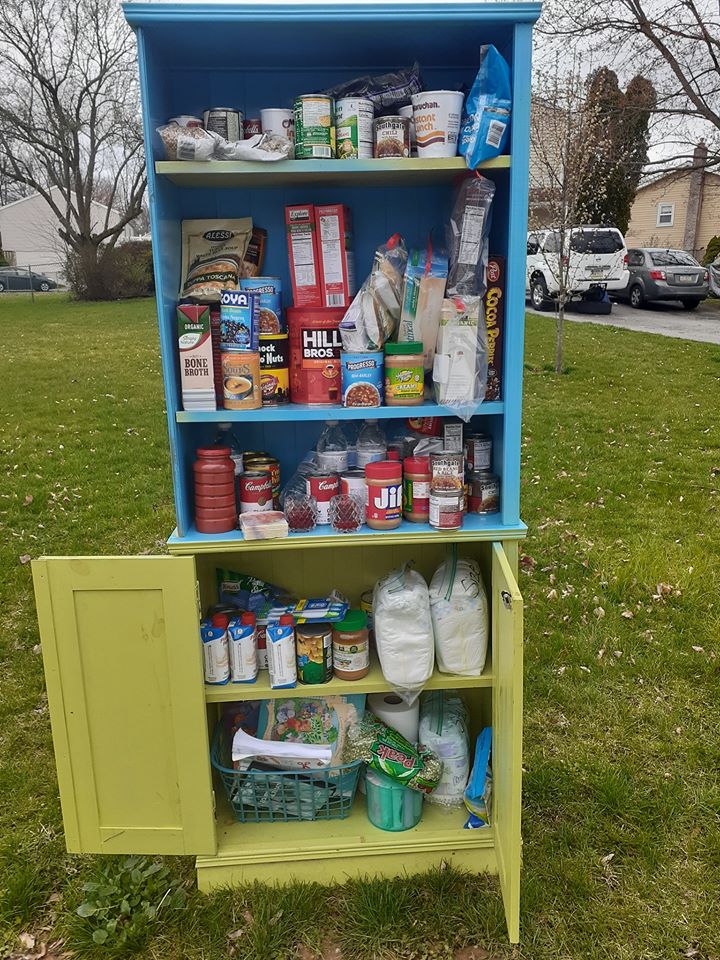 Jennifer Mvula of the Dover area created this pop-up pantry in her yard and shared it in the Central PA Mutual Aid Facebook group. Neighbors and others have been helping keep it filled, and Jenny and others are even offering to deliver items to seniors who need them. Similar pantries have popped up in Windsor and Manchester thanks to Jenny sharing hers.
Posted by Joan ConcilioMarch 25, 2020 Ask Joan, Local memories, Music, Only in York County, Restaurants2 Comments

How are you holding up, York County? Things are pretty surreal, and I don’t see that changing any time sooon. One thing that has helped, though, is seeing people pitch in to help each other.

For those on Facebook, check out a group called Central PA Mutual Aid – Neighbors Helping Neighbors. There, people from York and five other counties in the region are trying to help each other through sharing info on free meals for kids and what stores have toilet paper; putting up nonperishable pantries in their yards; and collecting items for delivery to senior citizens. Other groups, like the YDR’s Fixing York PA, are spreading the word about community resources as well. Then there’s the amazing Spread the Love group – started in West York and with members in multiple countries now – which invites people to make hearts or other cheerful items and place them in their windows, or to create colorful sidewalk chalk art, all to brighten the day of neighborhood walkers.

I’m not one to ignore the truly bad parts of COVID-19. I have friends without work, friends who can’t visit their aging relatives, friends who will almost certainly get sick in the next couple of weeks because of the exposure they have through the jobs they do. But that doesn’t mean I can’t also see the good where I can.

Hopefully, sharing some pleasant memories – which I intend to keep doing, because maybe you’d like to read about something other than coronavirus sometimes too – will also help spread some “good” in a tough time.

1. Memories of the Del Cords
2. Bar-B-Q Cottage in Harrisburg

1. Memories of the Del Cords

Late last year, I shared some memories from John Scheivert about the King Cobras, a former band in which he was the trumpeter. I have some great follow-up letters to share about the Cobras – hopefully soon! – but today I want to share a response I got to John’s memories that was regarding another York-area band.

This letter came from Marc L. Shutz of the Red Lion area. Earlier in 2019, I’d shared Marc’s memories of growing up on East Cottage Place, and it was great to hear from him again.

He wrote that he had never heard of the King Cobras (sorry, John!), but that he did recognize one of the members, vocalist Buck Generette.

Marc wrote, “Buck played guitar in another soul band, the Del Cords. There was also a Saxon (?) who lived on South Duke Street who played organ and also filled in on bass. He had two brothers that I knew. They were Thad and Ted. I don’t know who the white guy was that played bass – he also filled in on organ. The drummer was a white guy too. That was Jeff Hildebrand. I got to know Jeff pretty well over the years.”

He continued, “Dave Bupp, Buddy King and Ike Bowers also did vocals in the Del Cords. They used to practice in Ike’s garage about a block from my house. I used to stand in the alley and listen to them.”

“They were a good band while they lasted. Dave Bupp and Buddy King went on to the Mag Men,” he concluded, referring to the Magnificent Men, one of York’s most well-known bands of the day.

There’s some discrepancy in the band’s name – a lot of websites, including Jim McClure’s York Town Square, reference the “Del-Chords” with an H, but various copies of their own records show Del-Cords, Delcords, Del Cords and even some other variations. The most detailed explanation I could find was that the “Del-Cords” were the vocal group, and then there was an instrumental band known as The Dogs, and “Del-Chords” was the name of the combined larger group, but I can’t confirm that. (I’m sure many readers will write and set me straight, though!)

That said, in sharing Marc’s letter, I used the spelling he submitted, and will do the same for any others that are shared!

If you’d like to hear the group, here’s your chance!

Just one more short note to conclude today’s column, this one from Bob Holder of Manchester. Bob wrote in reference to an early 2019 question from Elizabeth Singley, seeking the name of a drive-in on Front Street/River Road in Harrisburg in the late 1950s and early 1960s. She recalled their great hamburgers!

Bob wrote, “I think the drive-in… was the Bar-B-Q Cottage. I also went there back in the ’60s. It was a popular place to see custom cars at that time! Also good eats!”

I have a number of other letters to share about the Bar-B-Q Cottage, which will be a topic for another column. For today, I just thought it’d be good to get the answer on the record!