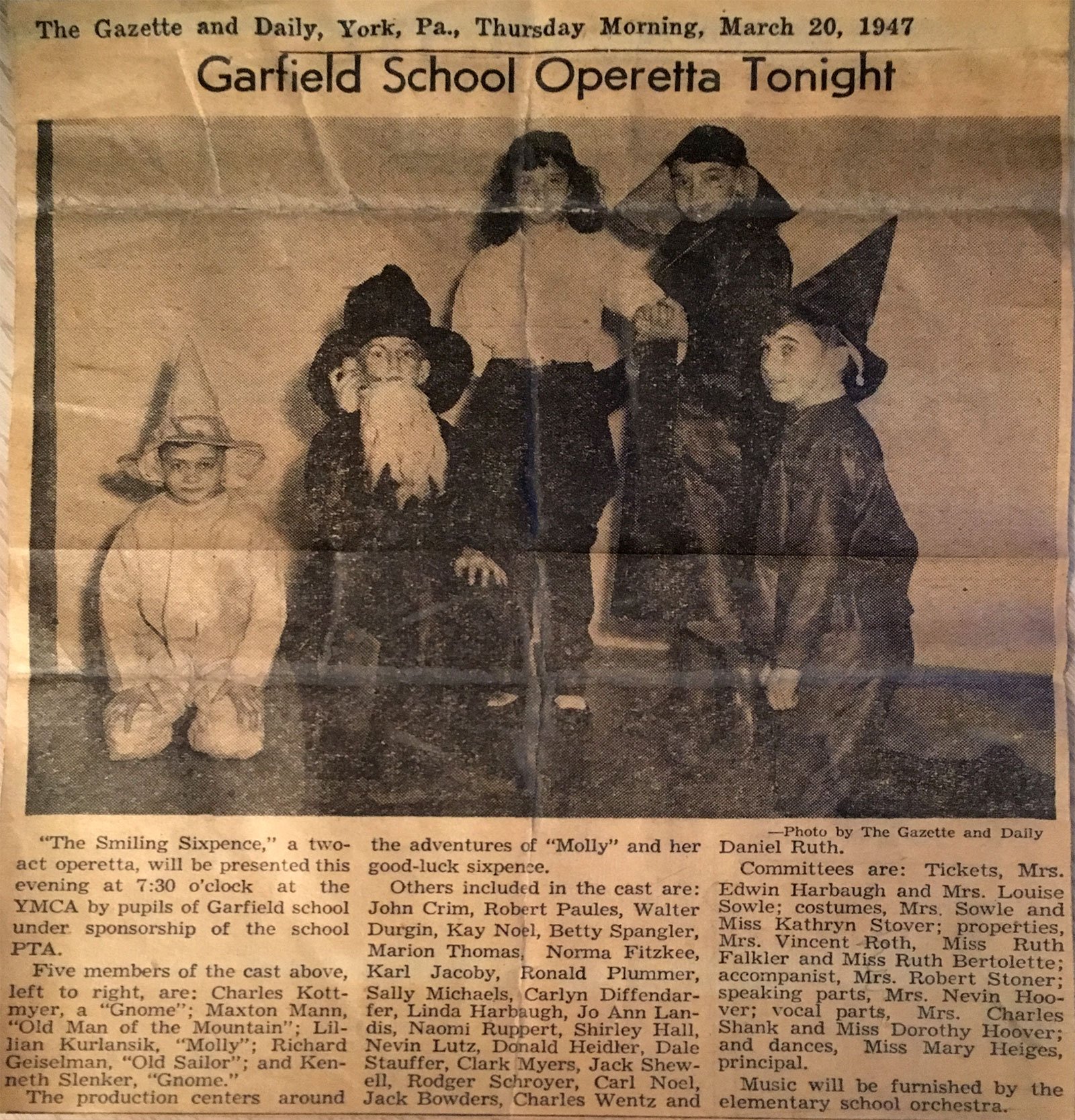 Reader M. Maxton Mann shared this 1947 York Gazette and Daily clipping of an operetta called The Smiling Sixpence he was part of during his years at Garfield School. He's pictured second from left as the Old Man of the Mountain.
Posted by Joan ConcilioSeptember 2, 2019September 2, 2019 Local memories, York City/SuburbanNo Comments

Grammar, a singer, a school and an eatery

Because you can never take the editor-ness out of an editor, I feel compelled to point out that while it feels like fall, it is not fall until Sept. 23.

As you were. Hopefully the rest of today’s column will be more fun than a grammar and usage lecture!

Earlier this year, I shared a request from longtime reader and commenter Gary Ellsworth Heiland, who wanted to know more about a local country singer on the radio named Cousin Lee. His first name, Gary, came from Gary Cooper, but his middle name, Ellsworth, came from this singer, Cousin Lee, with Gary understanding Lee to be a nickname for Ellsworth.

Gary just wondered if anyone could point him in the direction of his namesake (middle-namesake?). I have received very little information so far, except for a short letter I got that was just signed Bob D. that suggested checking with a radio station in the Lebanon area that broadcast around the 1950s. “They may know about him,” Bob wrote.

2. An additional letter about Garfield School

I’ll preface this next letter by saying that I normally get all my Ask Joan information either by mail or email. Since I work elsewhere full-time, I’m often working on columns at 10 p.m., 11 p.m., midnight, 1 a.m… and that makes it pretty hard to be able to rely on calling people for info!

But this week, thanks to the Labor Day holiday, I had a chance to call for some additional information about the newspaper clipping you see with today’s columnm.

It came to me from M. Maxton Mann, who wrote, “Thought you might be interested in some old information pertaining to Garfield Elementary School. I went there for six years. The first four years I lived at 356 Lincoln St.; the 400 block went to Madison Elementary. My last two years we moved to 452 Garfield St.”

I originally called to confirm Mr. Mann’s name, because his note came with a “Mr. and Mrs. Mann” address label but no further names. But I had a chance to talk to him a bit more and hear a great story about the play.

If you look closely, you can see that Maxton, as the “Old Man of the Mountain,” has a pipe. This was a real pipe, but filled with baby powder, and covered with a piece of waxed paper with some holes in it. By blowing up into the pipe, you could make it look like it was “puffing smoke.”

Well, you could… unless you accidentally inhaled it instead, which he did! I felt bad hearing about it, but the whole setup was so clever that I was mostly impressed that someone thought of it in the first place.

That wasn’t what he remembered most about the show, though; mostly, he was so thrilled that his grandma came to see him at the YMCA, where it was staged.

He also had listed his teachers for me in his letter:

He also recalled a number of the parents who were active in the PTA. The Harbaughs, the Crims and the Becks were among those, and he recalled the PTA organizing things like block parties where taffy was sold for a few cents as a benefit.

In true York County fashion, too, I happened to mention I knew one of the names in the article – it said that another person in the case was Karl Jacoby. I knew Karl through his wife, Pat; the two were a longtime barber/hairdresser combo in Shiloh, and Pat was a friend of my mother’s for quite some time. (She made beautiful dolls, one of which I still have!)

Well, I mentioned that to Maxton, and he said that Karl’s dad, Clark Jacoby, was his barber for many years, out of the Jacoby home on Smyser Street. (He also recalled setting up movies on a small projector in Karl’s basement, where kids might come pay a nickel to see a cartoon… “Back when there was no TV,” he recalled.

Maxton, who is 84, is a retired engineer from Met-Ed (I found this out after commenting on his incredibly neat handwriting). He’s part of the “Geritol Golf League” at Grandview Golf Course in Dover Township, which he mentioned has three gentlemen playing who are in their 90s! My only response was… “you all use golf carts, right?”

They do, which was a relief. I want to get more memories from Maxton and his golf friends, so I need them to stay in good health!

Finally for today, I have a recent letter from longtime reader and “pen pal friend” Roy Flinchbaugh. Roy was out of touch for a while due to some personal issues, but he’s back in my mailbox and I couldn’t be happier!

“We lived on West Jackson Street, very near to Bierman’s. Very close to our home was a small (about one block) street named Bierman Way. There were a number of homes on this street and a company (the name of which I’ve forgotten),” Roy wrote.

He continued, “In the ’60s, I remember eating at Bierman’s with my parents many times. There was a bartender there (alas, I’ve forgotten his name) – he was very friendly. When I think of Bierman’s I always picture the big pile of oyster shells piled up behind the restaurant (where the parking lot was).”

Roy added, “My mother said that when she was a girl (early 1900s), there used to be a circus (the York Fair?) which was held in the field area behind the restuarant at that time.”

Roy, it was very nice to hear from you, and to receive more memories of Bierman’s! As I’ve said before, I wish I had been able to eat there.