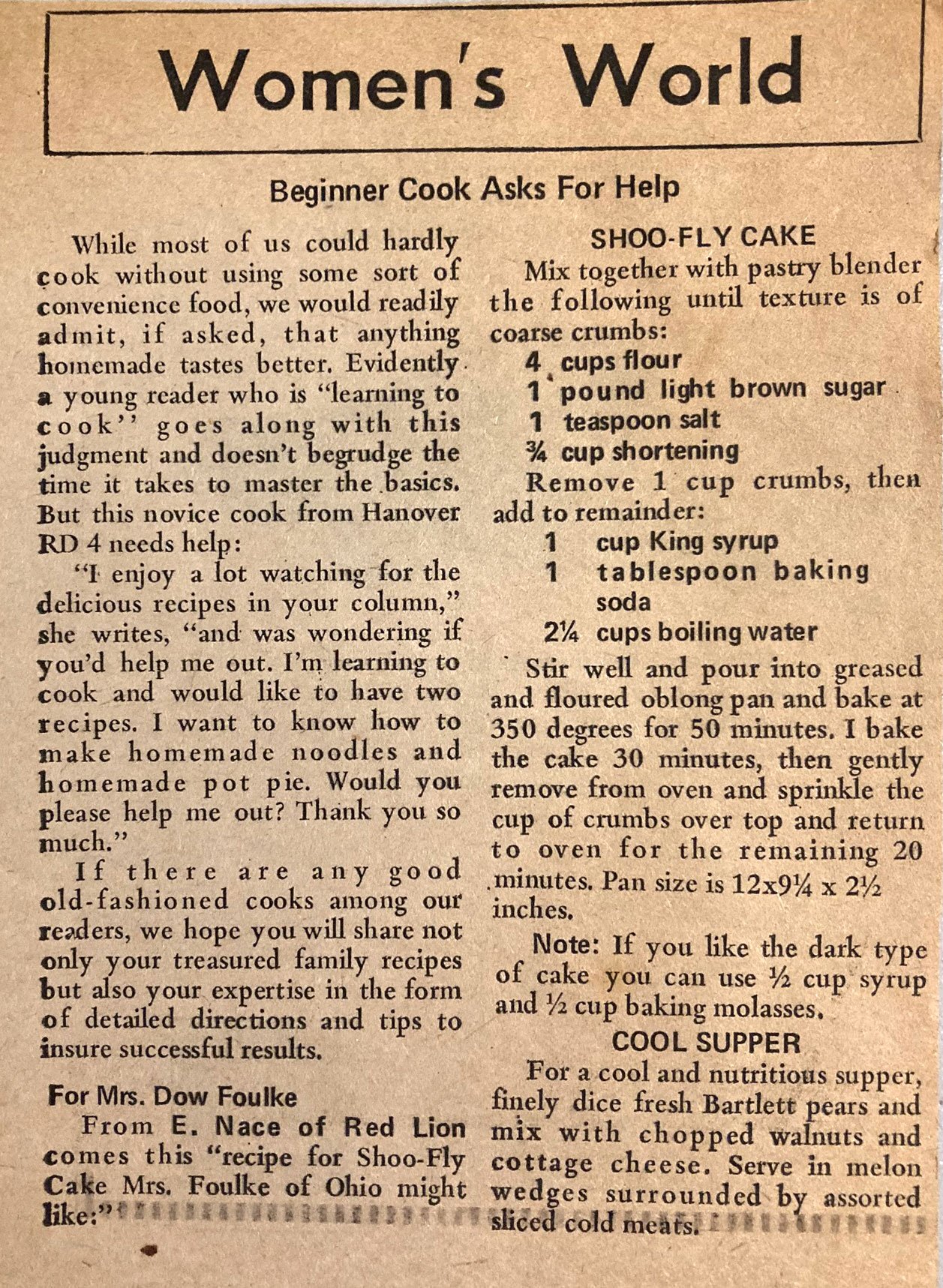 Some time ago, I received a great envelope full of all sorts of newspaper clippings and this note:

“I’ve been going through some very old recipes of my husband’s grandmother Martha Fellenbaum. I’ve found many advertisements on the back as well as other items.”

Unfortunately, the note wasn’t signed, but not only were the recipes and advertisements fun to read, I ended up falling into some fun local newspaper history rabbit holes too! I’m very much hoping you’ll enjoy this trip through some of the papers of the past as much as I did.

To start, we have this great recipe from “E. Nace of Red Lion” that was featured in The Gazette and Daily’s “Women’s World” column (exact date unknown). This column is fun because it starts with a plea from an anonymous reader in Hanover who is looking for homemade noodles and homemade pot pie recipes. (We all know the cook must mean “slippery” pot pie, right?) Then, in response to what I presume was a question in an earlier column, came this recipe.

Mix together with pastry blender the following until texture is of coarse crumbs:

Stir well and pour into greased and floured oblong pan and bake at 350 degreesw for 50 minutes. I bake the cake 30 minutes, then gently remove from oven and sprinkle the cup of crubms over top and return to oven for the remaining 20 minutes. Pan size is 12 x 9 1/4 x 2 1/2.

Note: If you like the dark type of cake you can use 1/2 cup syrup and 1/2 cup baking molasses.

Another set of recipes and ads came from a column in The York Dispatch called Coffee Time, written by a columnist called Tene Etta. I’m pretty sure I have been unknowingly channeling Tene Etta for more than a decade now. Her column, in fact, even started out with someone remembering teaching at the former Jefferson School… past schools and their teachers being a topic we’ve talked about frequently in this column, of course!

So of course I wanted to share one of her readers’ recipes for bread, published in response to a letter from a reader called “Miss S.” who was struggling to learn to bake her own bread.

Tene Etta sought help from one of her friends, “Mrs. E. Mummert,” who shared this recipe:

Make instant mashed potato for two servings as package directs, using liquid but omitting butter and seasoning. Measure one cup or use one cup of leftover mashed potatoes.

Turn out dough onto lightly floured board. Knead until dough is smooth and elastic and small blisters appear on surface – about 10 minutes. Place in lightly greased large bowl; turn dough to bring up greased side; cover with clean towel. Let rise in warm place (85F), free from drafts, until double in bulk – about one hour.

Turn out dough onto lightly floured pastry cloth or board. Divide in half. Roll out one half into a 16 by eight-inch rectangle; roll up starting at one end. Press ends even, pinch to seal; tuck under loaf. Place seam side down, in greased nine by five by three-inch pan. Brush surface lightly with some of the melted butter. Prepeat with other half of loaf. Let loaves rise in warm place (85F) frree from drafts until sides come to top of pan and tops are rounded. Set oven rack at lowest level. Preheat oven to 400F.

But, since this column appeared with ads on the back with seven-digit phone numbers, that seemed highly doubtful! So, digging deeper, I found out that a woman named Pauline Gallatin wrote Coffee Time in the late 1960s and 1970s. (Apparently, the column had taken some kind of break, as I also found a short clipping from June 1973 noting that the column would be “returning,” and hoping readers wouold be pleased! It was still published under the name of Tene Etta, but at this point in sort of an “Ann Landers” style.)

Pauline’s identity was revealed in a 1991 Dispatch food column by Diane Schmitt; Pauline was her mother, which she mentioned when a reader of hers wrote in looking for a recipe that had, many years before, appeared in Coffee Time! Pauline, for her part, was the great-granddaughter of the Dispatch’s founder, so it was really neat to me to see how Tene Etta’s name, and the work of finding recipes around York County, were truly a family affair!

But, back to Women’s World in The Gazette and Daily, which also hits some familiar topics. (“I thought we had exhausted all possible variations on the theme of Macaroni Salad,” one of those columns starts, a sentiment I echoed when I shared some of the more than 30 lemon sponge pie recipes and had a 10-part series on coleslaw in past columns!)

But, our intrepid (and unnamed) Women’s World columnist notes, “C.P. of York” had a different take. “My family doesn’t enjoy the sweet type of Macaroni Salad popular in this area,” C.P. notes. “My recipes seems very different in comparison to others sent in. Since I never larned to cook by measuring the amounts are given as close as possible. You can increase or cut down on any of the ingredients according to individual taste.”

Dressing: 1 cup salad dressing (a prepared salad dressing instead of real mayonnaise gives everything I make a much better consistency), 2 tablespoons prepared mustard, salt and pepper to taste, a dash of lemon or sweet pickle juice, and a little sugar, if desired.

But wait! As I read farther, “Mrs. Paul E. Shaffer of Hanover” had a macaroni salad recipe she said “is quite a bit different and also very good.”

Mix all ingredients together. Chill. Serve on crisp lettuce.

Now, look. I like hot dogs. A lot. And I will ceratinly give Mrs. Paul E. Shaffer credit that her macaroni salad is “different.” I do not, however, think I am ready to give her the “also very good” part.

And I can’t forget the ads! The ones on the back of some of these recipes and columns included: