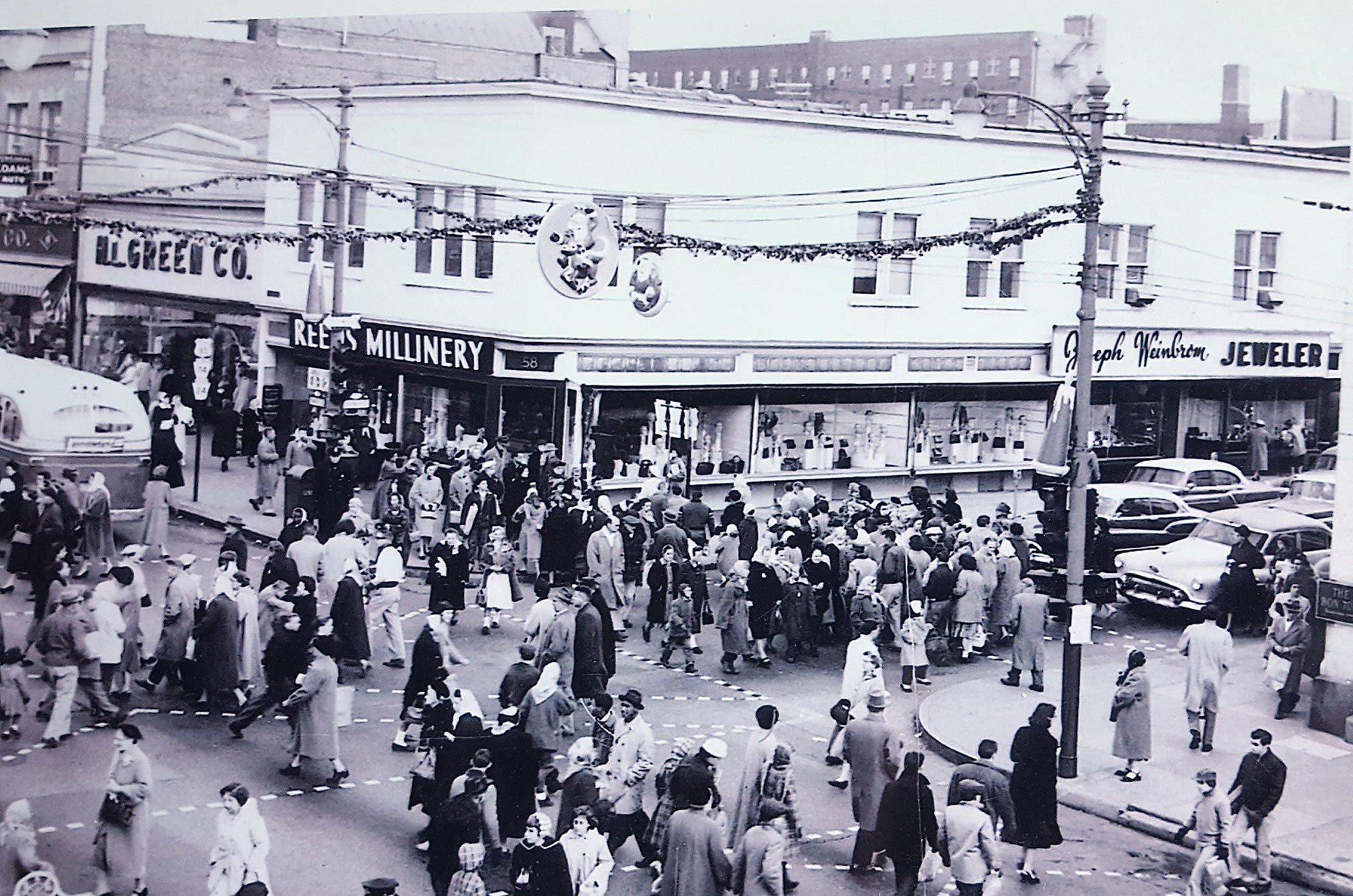 Reader Don Jones shared this photo of some of the Christmas decorations in downtown York in the 1950s or 1960s. The photo, taken at Market and Beaver streets, shows some Santa discs that Don is wondering about.
Posted by Joan ConcilioDecember 13, 2020 Around town, County customs, Dover/West York, Local memories, York City/SuburbanNo Comments

One thing of many I love about York County is how much we throw ourselves into holidays. I’ve traveled quite a bit, but have yet to see another place quite so devoted to its Halloween parades, Fourth of July fireworks and New Year’s Eve item drops.

Christmas is no exception. When I ask for memories of winter holiday seasons past, I get tons – but despite being a diverse county, I have yet to receive a single memory about Kwanzaa, Hanukkah, Diwali, Las Posadas, Solstice, Chinese New Year or anything else, including the Islamic holidays whose dates sometimes fall in winter and sometimes do not. I’d love to hear more about memories of non-Christmas celebrations too, so if you and your family celebrate something else, please write!

But, that is not to give short shrift to the many “ghosts of Christmas past” in my mailbox! Today, I’d like to share a couple of those – one recalling downtown York in the ’50s and ’60s, and one featuring a gift received just last year.

First, I’d like to share a letter, from longtime reader Don Jones. He wrote just before last Christmas that he has been trying to get information on any pictures that might still exist of the animated Christmas window displays at The Bon-Ton, Bear’s and Wiest’s department stores in downtown York.

“This was back in the 1950s and ’60s,” Don wrote. “They were always decorated the day after Thanksgiving. Back then that was the start of the stores decorating for the Christmas season. Not the beginning of October. I managed to find a picture of one from the Wiest window, which I’m sending to you. I’m hoping other people who read your column may have some pictures that they might like to share.”

He also wondered, “Another thing I’m trying to get information on is the Christmas decorations they used to string across Market Street. They were round discs that were hung from the streetlight poles. The disc would hang in the center with garland on either side. They went out Market street seven or eight blocks in either direction. I remember this because l lived on the 700 block of East Market Street. I also found a picture of the decorations at Market and Beaver streets. I’m also interested in pictures of these decorations and I’m curious to see if any of these decorations may still exist?”

He concluded, about the photos you see with today’s column, “As you can see, downtown York was very busy back in the day.”

I’m always interested in such photos and stories, so I am hopeful readers will have many to share with me and with Don!

Also today, I want to share a note from reader George T. Small, who shared a photo of a gift he received last Christmas. George noted that, like me, he has lived in Dover for the best part of his life. His mother, Louella Small, now in her 90s, gave him a mirror and thermometer promotional item from Dover’s former Green Hedge Service Station.

It sparked his interest and, in reading about the station, he came across some past columns of mine online talking about Green Hedge, which was in Dover Township on Route 74, where the CVS is today and where Brooks Drug Store and a hardware store were prior to CVS.

The best part of George’s sharing of his wonderful Christmas gift was a very “Only in York County” moment. He wrote, “My grandma owned a 180-acre farm on Blackberry Road, Margie Small, and on our way to her farm, I remember seeing CONCILIO on your mailbox. I grew up just to the east of you on Old Carlisle Road, near the old D.E. Stetler mansion on top the mountain over there. I enjoyed reading the story about some of the history of Dover; I currently live right behind Anderson’s car wash, in and around some of the areas that were spoken about.” He added that his current house was built in the late ’20s or early ’30s between where there used to be a one-room schoolhouse and where the old roller rink on Alta Vista Road used to be.

I was just thrilled – not only did George and I grow up only a few miles apart, but now apparently we are even closer, as I also am in the Weigelstown area! George also added, “My whole family grew up around here – grandmas, grandpas, aunts, uncles, etc. A lot of people don’t realize how it was around here back in those days. Some of my relatives were fox hunters who lived back in the hills off of Butter Road.” He also noted that, growing up on the mountain north of Dover, “everybody around called it Kochonour’s Hill after one of the land proprietors back there in the day. Like I said, a lot of people don’t realize how rich the history was around this little town.”

George, I am so grateful to you for sharing your Christmas gift with all of us! (I also have a bonus note about Green Hedge from reader Lee Wagner, who noted that he graduated from William Penn High School in 1953 with the son of the owners of Green Hedge Service Station, Robert Rauhauser, who he said lives in the Thomasville area.)

So now, we’ve had some “green” for the holiday, and you’ve “read” all about it… so Merry Christmas to everyone who celebrates!